The key to the Additive Manufacturing Center's success has been its inclusivity. It was structured as a resource to manufacturers and makers throughout the Hudson Valley. "3D Printing is likely to be relevant to anybody who makes something. It provided the perfect venue to just meet a lot of businesses," says Dan Freedman, the dean of the science and engineering department at SUNY New Paltz, and head of the center. This summer, they're offering a five-day intensive course to members of the public looking to learn more about the technology's applications. Freedman has also already worked with a variety of local industries, from helping New Paltz-based chocolatier Lagusta's Luscious 3D-print molds for chocolate skulls to prototyping new products for lighting giant Zumtobel in Highland. The center also 3D-printed a prosthetic "robo-hand" for six-year-old Joseph Gilbert, born without fingers on his left hand. One of the most exciting projects is with a startup called Mediprint, which 3D prints models of organs from CAT scans and MRIs to better prepare doctors before surgery. Founder Brent Chanin says "in one complex maxillofacial surgery, there was a one-in-three chance of complications. By using 3D models, they've reduced it to one in 50."

While much of the focus in economic development is in supporting existing manufacturers, there are a handful of forward-thinking operations aimed at creating new ones. Perhaps the most important is the Orange County Accelerator, which has adopted an incubator model for small manufacturers while offering existing businesses consulting and expertise. Incubator models have seen success in heavily concentrated industrial areas elsewhere in the United States. Silicon Valley, for instance, is rife with them in the tech sector, and many are seeing success in the medical industry around MIT, Harvard, and Northeastern University in Boston. Vincent Cozzalino, the Accelerator's managing director, explains that a core part of the Accelerator's mission is to offer subsidized rent, expertise, and equipment to entrepreneurs and manufacturers with a solid business plan. Cozzalino says they've already made an impact. "We've only been at this about 16 months," he says. But in that time, "We've had one company graduate out and a start a factory in Dutchess County. We're totally full right now, and have a waiting list."

Larry Fryer, CEO of Fryer Machine Systems, has been in the business for 31 years. While others may be wary of increased competition, he welcomes the possibility of new businesses coming to the area. "There are so many things that small shops of three to four people can make. They benefit everybody. More jobs are created by small business than any other way of doing it." Since starting his company in the spare bedroom of a two-bedroom apartment, he's now making state-of-the-art milling equipment that other manufacturers are using to produce everything from guitars to bicycles and aerospace components. "Our business is good," he says. "We continue to grow every year." 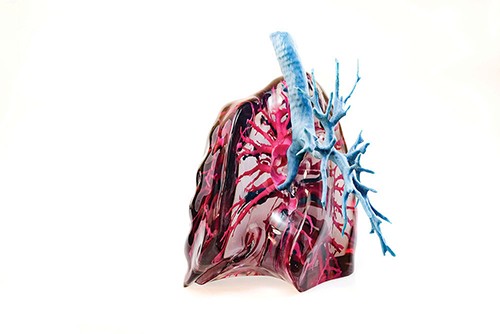 Though the industry is often unpublicized, it's an important aspect of the economy. Nondescript warehouses throughout the Hudson Valley are hubs of innovation, talent, and next-generation technology, supporting workers with challenging but lucrative careers. The reach of Hudson Valley manufacturers extends into jet liners, automobiles, medicine, electronics, and other goods that drive the technology we depend on in the modern age. They just may not look like it from the outside. Mediprint's Brent Chanin says, "I am very optimistic about my company's success in the Hudson Valley. We all have the opportunity to be on the cutting edge."