In a new exhibition entitled "Entre Espacios" (The Spaces Between), currently on display at the Hudson Valley LGBTQ Center, artist and community organizer Susie Ximenez has brought together five of the region's queer Latinx artists to reflect on the liminal spaces they occupy in contemporary American society.

Part of a series of exhibitions organized through Latinx Project, this show spotlights the marginalized experiences of artists whose layered identities leave them shifting between worlds. The collected work reflects the complex, intersectional movement of the artists between national borders, between (majority white) queer communities and "the Latin home," and between a range of affective states. 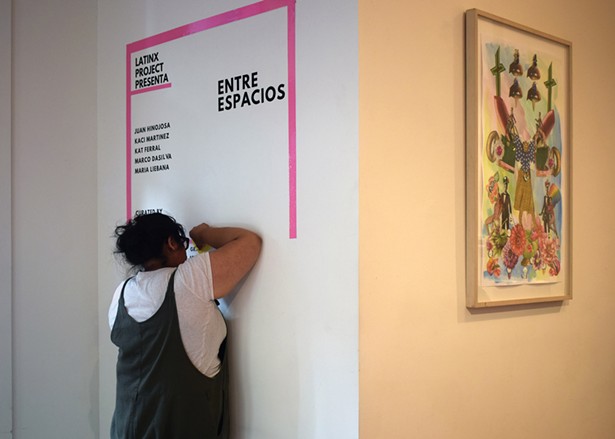 Maria Liebana's piece is set within the cool recesses of a former bank vault, adjoined to the LGBTQ Center's main gallery space. Inside, a pink and white tiered quinceañera cake gradually melts. Perhaps Liebana wants us to imagine that the cake—a symbol steeped in sexism, double standards, and gender conformity—has melted from continued exposure to the artist's queer identity. Yet, given its location within the bank vault, the cake may also stand in for migrant farm workers, their labor extracted by capital, their bodies exposed to the elements, their rites of passage tainted by consumerism.

Depicting himself as a boldly neon yellow sun overlooking a pastoral green meadow, artist Marco DaSilva has crafted a self-portrait that may remind viewers of the aggressively cheerful sun infant from "Teletubbies." Fittingly, DaSilva is attempting to translate the experience of mania, wherein one can be convinced that they are, in fact, the center of the universe. In another work, DaSilva's use of palm trees—and again in that blaring yellow—gently points to the irony of the middle-class association of the tropics as a restful vacation destination where people go to recover their own mental well-being on the backs of underpaid workers.

Both Kaci Martinez' abstract yarn quilt and Juan Hinojosa's mixed-media collages, made with found objects, encourage viewers to consider what's picked up, what's discarded, and what can actually be carried during multiple border crossings. One of Hinojosa's collages is filled with white space, compelling viewers to make sense of loose references to Catholicism, cosmetics, and sex, suggesting that a person's whole self: their desires, their faith, their self-image, don't disappear while in a period of traumatic transition.

Border crossings—whether physical, emotional, or cultural—do not occur in a vacuum, and the art in this show, in rhythm with the ecologically and politically sweltering summer, is concerned with the frictional heat that accompanies perpetual movement.

Celebrate Pride Month in the Hudson Valley with These Events