Even in the Internet-Era, Independent Hudson Valley Bookstores Thrive

Even in the Internet-Era, Independent Hudson Valley Bookstores Thrive 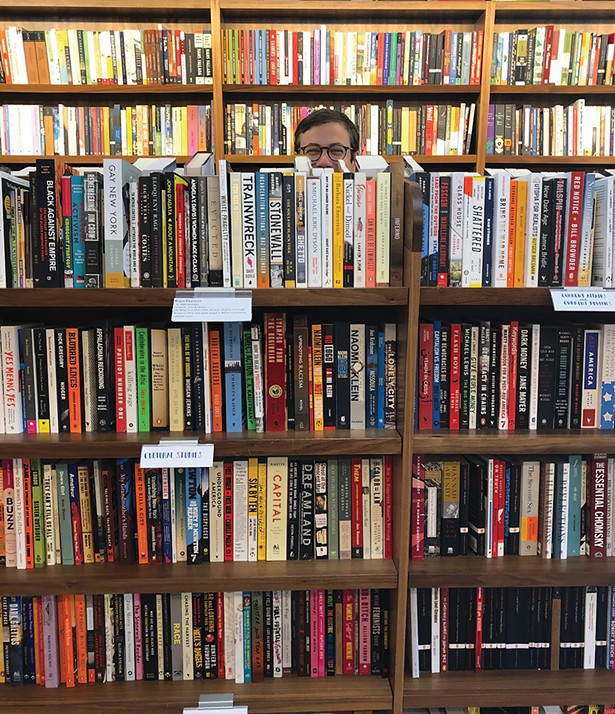 Editor's Note: As of press time, bookstores in the region were closed for in-person business but many were open for online orders. This will undoubtedly be a trying time for bookstores (and every other retail sector) as shops shift from brick-and-mortar business to online sales.

The soothing scent of paper, binding glue, and ink. The cozy contentment that comes only with a good read plucked from the surrounding rows of enticing spines. Improbable as it may seem in the internet epoch, recently people have been rediscovering—or discovering, if they're below a certain age—the sheer wonder of small bookstores. They've found that, for all the click-and-you're-done convenience that comes with buying books online, such an experience simply cannot take the place of the real thing.

Like all internet transactions, purchasing books off the web is cheap and easy—but about as personal as paying your electric bill. E-books are glorified Word docs or pdfs, to be downloaded, absorbed, and, ultimately, deleted and replaced with the next lump of temporary data. Real books, though, are permanent vessels of information, entertainment, and art. Bookstores, where books exist in the company of those who love them, are physical bastions of ideas and intellectual interaction—sanctums of shelves packed with tactile tomes that feel good in your hands and invite you to get lost in their pages—and consumers are embracing this undeniable fact. According to a February 2020 Forbes article, the American Booksellers Association has seen a 49-percent leap in its membership, going from 1,651 stores nationwide in 2009 to over 2,500 last year. April 25 is Independent Bookstore Day, a celebration that takes place at over 450 bookstores across the country. Utilizing the collective power of authors, publishers, and indie booksellers themselves, the happening honors the reading community at large as it brings business to brick-and-mortar shops via special events and limited-edition, Independent Bookstore Day-only products.

Where Everybody Knows Your Name

The partaking of the sacraments of indie bookstores in situ takes on an added resonance when the retailer in question is your own neighborhood bookstore, a unique place with its own character and its own characters: "Cheers" but with books, not beer—well, actually, in some cases, both. "We didn't set out to open a bookstore with a bar in it, we sort of lucked into the idea," says Spotty Dog Books and Ale co-owner Kelley Drahushuk about the concept behind her shop, which opened in a historic Hudson firehouse in 2005 and boasts a bar providing local craft beers, wine, and other beverages amid its estimable selection of books and art supplies. "My uncle, who owns a brewery in Albany, bought the building with the idea of making it into a bar at the same time my partner and I had an art supply store further down Warren Street. The renovations were taking longer than he'd thought they would, so we decided to put the two businesses together, mainly as a way to get the place open faster. A lot of bookstores also sell art supplies, so we'd always get people asking, 'Where are the books?' That set off a lightbulb, and we just started stocking more and more books." Drahushuk's overseeing the Spotty Dog's sizeable kids' books section led to the store's cosponsoring the annual Hudson Children's Book Festival (April 26), the largest such event in the state. Since the earliest days of the city's much-touted rebirth, the shop's regular readings and live music events have helped make it a hub of the community.

And community is key to the resounding rebound of mom-and-pop bookshops. The novelty of Amazon ("the A word," to many indie book retailers) has worn off, and book buffs haven been increasingly inclined to emerge from their garrets to go somewhere quiet and comfortable where they can engage in nonvirtual conversation and feel free to fondle a potential purchase. Another successful space utilizing the bookstore-with-a-bar/coffee shop model is Rough Draft, which opened in an 18th-century stone building in Kingston two years ago and has quickly become an indispensable social center of the city's storied Stockade District. Sharply managed by energetic young owners Anthony and Amanda Stromoski, the spot plays host to author appearances, community and group meetups, and other events (its weekly trivia night is especially popular) and curates a monthly retreat program for visiting writers that culminates with a reading and an audience Q&A. Food is another facet of the allure: Rough Draft also serves pies and other pastries, which aligns with the trend of bookstores broadening their revenue base by carrying more than just books, whose low markup ceilings can make for difficult profit margins.

Newly opened in Newburgh, the Barking Goose builds on the beer and wine bar/coffeehouse/bookstore models of the Spotty Dog and Rough Draft but with the added draw of a full-fledged cafe offering salads, soups, sandwiches, quesadillas, and other fare. "We didn't expect the cafe to do as well as the book side, but it's been really busy," says co-owner Jenifer Flynn, whose shop specializes in children's and young adult titles and exhibits art by local artists, much of it for sale as well. "On some days, we sell more food than books. [The cafe] brings people in, and often they'll also buy a book or see something they end up coming back for later." She points to the unwieldly operating expenses of chain bookstores competing against online book outlets as contributing to the current struggle of the former. "The traffic to big-box stores has leveled off at this point," she says. "Especially since there's been a movement toward small, local businesses." Oren Teicher, the head of the American Booksellers Association, agrees, telling USA Today in 2011 how, after a decade of decline, the organization's membership had not only stabilized, but grown.

As Flynn further notes, several small area shops have banded together with the aim of raising the tide to float all boats: In honor of Independent Bookstore Day, the Hudson Valley Book Trail, a grassroots network of regional indie booksellers, is offering a tote bag adorned with a map of participating stores (a paper map is also available), and customers who use the bag at her store will receive a 10-percent discount on purchases.

Among the old guard of independent Hudson Valley bookstores are Oblong Books and Music and the Golden Notebook. Oblong opened its Millerton doors in 1975 and in 2001 added a second location in Rhinebeck that greatly expanded its size in 2011. Both Oblong locations stock gift items alongside books, and each has a CD section as well. The Rhinebeck store has a reputation as a premier venue for author events and has hosted signings by the likes of Hillary Clinton, Neil Gaiman, and, last month, film and television producer Barry Sonnenfeld. The Golden Notebook, a Woodstock staple since 1978, is an intimate and recently renovated shop with a second-floor event space. It's welcomed personal appearances from town resident Gaiman as well as Pulitzer Prize winners William Kennedy and Paul Muldoon, Man Booker Prize winner Lydia Davis, and others. The shop makes a point of engaging directly with the community by partnering with area public and independent schools for book fairs whose proceeds go to supporting schools and local nonprofit groups and cosponsors the annual Woodstock Bookfest.

Another venerated area indie bookseller is Inquiring Minds, which has stores in New Paltz (est. 2005) and Saugerties (2003). As with several of the other shops covered here, both have overstuffed chairs perfectly suited for curling up while getting acquainted with a selection from their well-curated inventory of new books. The latter, larger location, on the corner of Main and Partition streets in the heart of the village, is a vital local economic and community anchor that sees townies and weekenders mingling over savory, steaming cups of warmth brewed by its full-service coffee counter staff. The bustling cafe wasn't originally part of owner Brian Donoghue's pure-bookstore plan, but, as is the case with similarly successful indie book merchants, its early addition was, once again, part of the proven movement of diversifying to offer shoppers more; his Saugerties store has long carried CDs (jazz is a specialty) and not long ago began selling used records, an element that dovetails nicely with the physical appeal of the main merchandise. "I guess it's a little nostalgic, because I've always loved records—besides the music, I love the covers and the artwork," says Donoghue, who aims to add a live music space with a bar to the Saugerties site in the near future. "Like with books, vinyl is tactile. We learn through our senses, and one of the most important senses is touch. And we're losing something bigger when we lose that, which is what's happening with digital music and books. A lot of people are really seeing that now."

One of the newer shops on the shelf is Split Rock Books, opened in Cold Spring in 2018 by married couple and transplanted New York booksellers Michael and Heidi Bender. "I'd gone to Vassar College in Poughkeepsie, so we were already very familiar with the Hudson Valley when we decided we wanted to move here and open a store," says Heidi, whose husband is a former librarian. "At the time, there hadn't been a bookstore in town for 12 years. People who live here told us they'd really missed having one, so they were really happy when we opened." The shop focuses on new books, with an accent on literary fiction and nonfiction, small-press and local-interest titles, and children's books. Although Split Rock's limited space isn't conducive to incorporating non-book items or a cafe, it's well complimented by neighboring Cold Spring Coffeehouse, art supply outlet Supplies for Creative Living, and stationer Pink Olive. The Benders' business works closely with the community, bringing authors to speak at area schools and sponsoring a wish list program that allows patrons to purchase books to be donated to schools and libraries.

As this is being written, local indie bookstores, like so many other small businesses, are grappling with how to weather the economic blow being dealt to all of us by the COVID-19 virus. While the majority have been forced to cancel or postpone events, several shops have come up with innovative ways to ride out the storm. Most stores are, ironically, weaponizing the web against itself by providing customers the chance to order books through their websites for quick in-store pickup; several, such as Split Rock and Oblong, have implemented curbside pickup of preordered books (Oblong is even offering free delivery within a 20-miles radius of either of its locations). "Just last night [March 14], we launched an email/phone order option," says Rough Draft's Amanda Stromoski. "Already, we've started getting sales through that."

"I think small bookstores are doing well because people across the country are interested in patronizing businesses that align with their values and not the values of tech lobbyists who support surveillance culture," says Bender. "Sure, maybe you can get a book for a dollar or two less by buying it from an online-only bookseller. But you can't go meet a friend at that bookseller. You can't go into an online bookseller on a hot day to be in the air conditioning while you look at the books. You can't buy a book and then go grab a cup of coffee from right across the street. We live here and we pay taxes here. And those taxes go right back into the community. More and more, people are seeing the value in that."