The most difficult thing for a person to give up is his suffering. 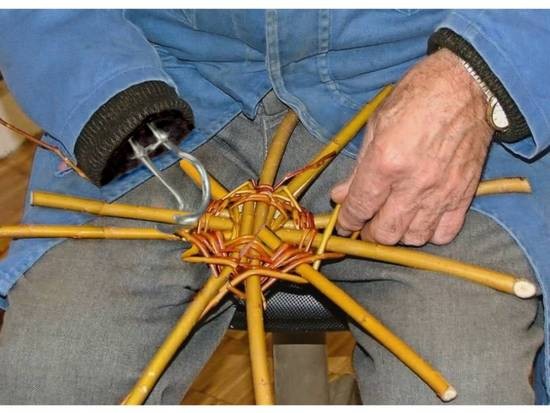 Rumi relates the story of a teacher he calls "the one-handed basket weaver." This was a khwaja or master that sometimes remained in solitude, and often emerged to teach and ply his trade as an artisan and merchant. Practitioners of his tradition were guided to do their spiritual practice in the midst of life, such that "hands labor while heart and mind are occupied with contemplation."

In the story, the khwaja was camping on the side of a mountain outside of town, weaving baskets and meditating. His chosen discipline in the perfection of faith was to eat only food that came to him, sent from the source, as it were, and to take nothing directly for himself. He found that by attuning to the rhythms of the mountain, he could arrive at the base of a tree precisely in time to catch a piece of ripe fruit as a gust of wind shook it from the branch. This continued for a long time, and all was well. He worked, sold his baskets, meditated, and received the food he needed to survive.

One day the wind stopped, and the air became still. There were no gusts to blow fruit from the trees. A day passed, and then another, and a third. He watched the fruit swelling to tantalizing ripeness. Hunger gnawed at his organs and the khwaja began to feel desperate. Finally he could bear it no more and plucked a ripe pear from the tree.

The moment he took the first juicy bite, he found himself tackled from behind and dragged down the slope by a policeman, mistaken for a member of a gang of thieves the police had just then captured on the same mountain. Judgment was summary and punishment swift—the right hand and left foot of each thief was cut off then and there. After the khwaja's hand was cut off, someone recognized him and, with regrets, he was set free.

The khwaja was unblaming, saying "I broke my vow, and stole fruit from the tree. The punishment was correct."

Having healed sufficiently, the khwaja resumed his work, producing baskets of profound beauty and meaning—unthinkable work for a weaver with one hand. Everyone wondered how he did it, and his students spied on him to discover how he managed to accomplish the impossible. They observed that there was an invisible hand working alongside the khwaja's as he wove.

"It is the hand of the Friend," he explained. In the terminology of the khwajas, the Friend is a term for God, or the Reality that underlies all.

Though the story smacks of hagiography, it rings true in a more ordinary way. For instance, in a given moment how much doing is required, and how much can the underlying pattern of reality be trusted to provide? Regardless of a person's aim in any sphere, a matrix of people, relationships, and processes are already in play. Perceiving, attuning to, and interacting with these preexisting conditions not only eases workload, but also facilitates harmony and even joy in the work.

Sailing is a good metaphor and even a direct example of this phenomenon at work. A good sailor knows how to balance his airfoil sail with the influence of the rudder to travel in any direction, save straight into the wind. For the sailor it is a matter of understanding the forces at work, the laws that govern them, and applying technique to travel. With sails and rudder set, he can sit back and sail. All he needs then is a destination.

We take for granted so many factors that underlie existence. Gravity, for instance, is ever-present and we always interact with it unceasingly. It sounds obvious, but the effect of functioning with an awareness of gravity is profound. How much energy is spent on the tension required to fight the idea of gravity, like fighting an imaginary dragon. When sensitivity to weight arises in the body, much unnecessary striving relaxes, and grace ensues.

Or air, which is a profound metaphor for the foundation of reality supporting all life. Air is freely available and shared by all. Air gives life to beings with every breath. Air conducts energies, like sounds and even subtler vibrations. Air is a source of food for our bodies and our beings. It is no coincidence that the root of the word respiration is spirit. It is a vehicle for prana, in the yogic tradition, and indeed every spiritual tradition places a huge emphasis on awareness of breath.

Participating with underlying forces is not simply a matter of exploiting resources as the principles of capitalism guide, for to be harmonious with the reality both invokes and requires gratitude. How would our perception of abundance and lack, happiness and discontentment shift if we were to feel grateful to the air with every breath, grateful to the ground with every step?