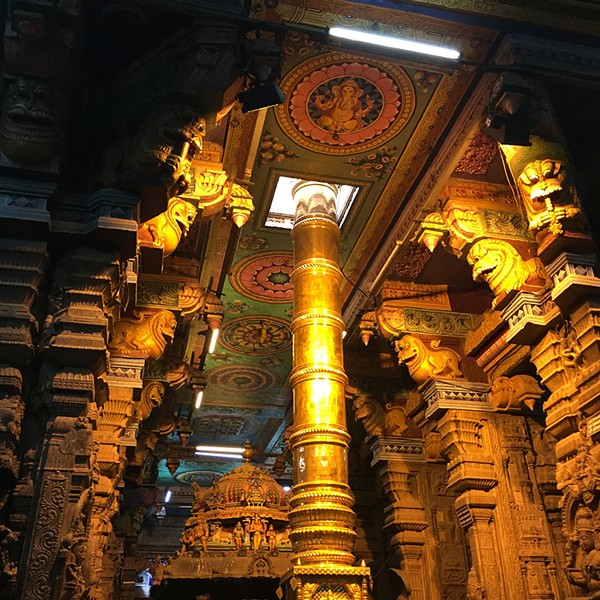 There's a multitude of impressions from a recent trip to India that I would like to share, as they were, for me, such good medicine in a troubling time. Please forgive the naive perceptions of a wide-eyed tourist but know they are sincere. Here are three, in a triadic sequence.

I spent the first and last nights of a trip through south India in the same place—a guesthouse adjacent to a large park, in the 500-year-old Portuguese colonial neighborhood of Cochin. The bleating of free-roaming goats like crying infants mingled with an incessant litany of car horns. In the square, barefoot children kicked up clouds of dust playing soccer. Burning garbage and foliage piled up by sari-clad women bent over straw brooms provided an omnipresent incense, mingled with the odoriferous wafting from the open sewers running along the streets. Old and young beggars made a sign for food with a far-away gaze; and rickshaw drivers in dhotis followed pedestrians a distance along the street with insistent offers of service.

On arriving, I had difficulty digesting the intense, for me unusual scene. Inwardly I tiptoed around the raw impressions. However, on returning to the place after a long south Indian walkabout, encountering not only the public but also manifold varieties of spiritual profundity and paradisiacal enclaves, the westerner in me had begun to be converted, and I could let it in. In the process of the journey I felt the depth of happiness of people, with so much less of the material accouterments, possessing an immense quotient of happiness, friendliness, and generosity. I discovered, as Joseph Campbell observed "when you look at India from the outside it is a squalid mess and a haven for fakers; but when you look from the inside it is an epiphany of the spirit. The eyes see a river of mud and the inner eye sees a river of grace."

Sri Aurobindo was an Indian activist in the movement for independence from British rule. Imprisoned for speaking out, he had a spiritual awakening and once released, left politics. He founded a theoretically sophisticated and modern method of inner work called Integral Yoga.

Aurobindo's view of the world and humanity was both transcendent and practical. He taught that there is a "supramental" intelligence, an immanent dharma or pattern of a possible evolved mode of life for humanity.

The ashram is in the middle of a busy downtown neighborhood in Pondicherry. Despite intense activity of life outside the walls, the atmosphere inside is a vortex of stillness. Sitting and meditating, I found the place carried a plan and feeling of hope for the fulfillment of a positive future, for myself individually, and for humanity. There was barely attention left to dwell on problems and I saw the rightness of holding an image of a bright future, and persisting in leaving off criticism and negative self-indulgence. The supramental vision of a harmonious human society organized around real values had a reality in the space.

Here's something Aurobindo said in a letter to a student:

Look at all that is and has been happening in human history—the eye of the Yogin sees not only the outward events and persons and causes, but the enormous forces which precipitate them into action. If the men who fought were instruments in the hands of rulers and financiers, these in turn were mere puppets in the clutch of those forces.

When one is habituated to see the things behind, one is no longer prone to be touched by the outward aspects—or to expect any remedy from political, institutional, or social changes; the only way out is through the descent of consciousness which is not the puppet of these forces, but is greater than they are.

The sensation of the soles of my bare feet was strong, almost overwhelming as I stepped between hot stones along the path up Arunchala, the holy mountain of south India. The path led to the meditation cave of a saint and radical renouncer of the last century, Ramana Maharshi, famous in India and also around the world. His teaching and method was a singular, unrelenting and probing inquiry: Who am I?

Sitting in Ramana's cave, I experienced the force of the place. I often try to meditate and usually fail miserably. This time it was different. It was as though the vibrational signature of Ramana was itself the tonic of meditative practice. I felt in it two qualities that I associate with meditation—engagement and impartiality. These two are rarely found in the same moment. Ordinarily when I'm impartial it's because I don't care, and when I'm engaged it's because I'm attached. But in this cave both were present together and in conjoining produced an overwhelming force of attention and love.

The image of ugliness and desperation, in myself and in the world, contains an invitation to inhabit things as they are. The vision of possible real evolution becomes a new center of gravity and the remainder is hope. It is the heart of the triad. The palpable atmosphere of total attention and complete acceptance affords a reconciliation of the actual and the ideal. In the book of a journey through India, these three pages are written as one.