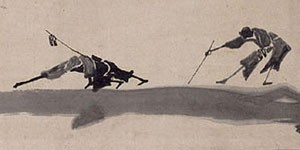 Not long ago I found myself in the presence of someone, who, years before, had been my enemy. By chance we were confined together at a seminar on a distant continent. It was as though an animosity that I was unable to integrate seven years previous was being re-presented, and life, which is so generous with opportunities, was giving me yet another chance.

Day after day I would see this person and the old feelings of slight, anger, and fear arose like so much bile from an emotional belly. In this state there was no chance of any compassion or even sympathy splashing over the edges of the walls of my defense.

I began to feel deeply lonely in my anger and fear. It was cutting me off from everyone. There was something I needed to do to redress the rift, but I could not allow myself to perceive what it was. Inwardly and outwardly paralyzed, I was the slave of the antagonism. Clearly it was not him I was punishing with my coldness, but by spitefully holding hostage the flow of attention, I was suffocating myself.

It was not until I was told by another person that my enemy was suffering with deep and real difficulties that I could begin to consider him more impartially. In hearing about his problems something shifted in my perspective, and I was able to relax the tense, defended stance. For a brief moment I stood in his shoes, feeling his loneliness and paralysis almost as my own, and I begin to notice in myself a refreshing trickle of generosity.

I was reminded of an old Persian saying: Only she can be just who is able to put herself in the position of others.

When I saw that my enemy was as imprisoned as I had been, I was able to give him something he needed. Only then did the block of ice that had formed around my feelings begin to thaw. And I began to be happy.

The juxtaposition of the states of defensiveness and openness was so potent that I was startled, and recalled a story from Paul Reps classic compilation Zen Flesh, Zen Bones:

Hakuin, the fiery and intensely dynamic Zen master, was once visited by a samurai warrior.

"I want to know about heaven and hell," said the samurai. "Do they really exist?" he asked Hakuin.

Hakuin looked at the soldier and asked, "Who are you?"

"I am a samurai," announced the proud warrior.

"Ha!" exclaimed Hakuin. "What makes you think you can understand such insightful things? You are merely a callous, brutish soldier! Go away and do not waste my time with your foolish questions," Hakuin said, waving his hand to drive away the samurai.

The enraged samurai couldn't take Hakuin's insults. He drew his sword, readied for the kill, when Hakuin calmly retorted, "This is hell."

The soldier was taken aback. His face softened. Humbled by the wisdom of Hakuin, he put away his sword and bowed before the Zen Master.

"And this is heaven," Hakuin stated, just as calmly.

The Dzogchen tradition posits that the most difficult thing for a person to sacrifice is her suffering. It suggests that people will give up almost anything—except what makes us unnecessarily unhappy. This sounds illogical and counterintuitive but many examples suggest it is true. We go to lengths to avoid inhabiting the anger and resentment we carry around; or the doubt we feel in ourselves; or our worries about the past, and the future; or our attachment to deeply held "beliefs."

In the end, the lengths taken to avoid facing our unnecessary suffering lead to exponentially more suffering for ourselves and others. Consider the continuous, retributive violence and wars waged because we are unable to inhabit our hurt and forgive each other.

We cling to our suffering because, in the absence of real presence, it supports the illusion that "I exist," and reinforces for better or worse, our known world. It isn't pleasant, but it's familiar.

Giving up suffering thrusts us into the realm of the unknown, where something new can be created. Can we, like the intrepid trekkers, boldly go where no man has gone before? Indeed this is the task before each of us, in each moment, and before humanity as a whole, at this pivotal moment on Earth.