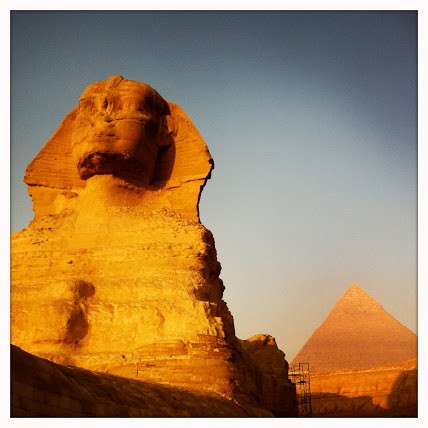 Hungry as an archway through which the troops have passed
I stand in ruins behind you
With your winter clothes, your broken sandal straps
I love to see you naked over there especially from the back
—Leonard Cohen, from his song "Take This Longing"

When we were walking in the desert, you and I, past the buildings and monuments conceived and constructed by people long dead (but steadfastly planning for rebirth as a star from the womb of the spiral nebula within the constellation Orion), you minded the abundance of inscriptions, of reliefs and cartouches, of symbolic fingers pointing at the moon. "I want a human being to be my agent of meaning," you said. "I want a living symbol—not one carved or built in stone."

My answer was clear—that I can only be that for you to the degree that I am an embodiment of the principles those symbols mean to represent. The fullness of any symbol I am is terribly constrained by the limits of my being. "I don't care," you said. "At least you are alive."

Still, I persisted, is it not true that as we traveled to almost every temple placed intentionally at intervals along the body of the Nile, we were infused with the frequencies unique to each? Were they not, in a sense, alive?

Did we not discuss how the Symbolist Egyptologist Schwaller de Lubicz demonstrated that the complement of temples is itself a macrocosm of the human form, which those Kemetians took great pains to express in every construction from the tiniest scarab to a 500 foot pyramid?

What of the word we spontaneously spoke to describe each of the temples? Sacred. Why did we choose this word? Could it be said we were left with an impression of an heroic body pushing though a stone membrane from another more integral world (like the perfect body of Nut embracing the whole sky), reaching out to us from a distant past, or yet an even more timeless place? Not only did we sense a meaning in the architecture and the reliefs that covered acres of high walls, but also we felt an intensity of vibration out of context to the material itself.

And when we allowed our thinking and feeling and sensing brains to become still, receptive like drum skins, we found that we were able to measure the places in the instrument of ourselves. Despite your irritation at being assaulted by so many grand and small symbols and inscriptions, I know you felt this too, that we felt it together.

We knew the difference in quality and frequency between the exquisite femininity of the Philae Temple, with its Mammisium birthing chamber, and sublime images of Isis supported and empowered by her husband Osiris, and nurturing her son, Horus; versus the masculine power of the Luxor Temple, the Temple of Man, with its papyrus forest of massive colonnades stretching skyward, its muscularity and heroic deities with erect penises emitting spermatozoa, replete with vibrating flagella.

How can you deny that the dual temple to Osiris and Sobek—healing and death—which served as both hospital and hospice, together but each with its own holy of holies, did broadcast a pulsation? We were compelled to be at attention, our hands on the altars completing a circuit, until the guards said "no pray!" and we had to move along.

In all this humping through the desert to place ourselves at holy sites, tombs, and pyramids (what they are is hard to say—certainly not tombs), a case can be made that we became, in a subtler body at least, mosaic symbols comprising the summary teaching expressed in the Nile temples and monuments. If it were only impressions and memories of places and architecture we gleaned, the journey would have little value. For that we could look at picture books.

Of course we were left with more than only energetic imprints. What other than awe can be felt in the face of monuments of such scale, technique, and above all, embodiment of meaning? The accomplishments are so far beyond what we can manifest as to be otherworldly. And there were those in our midst who leapt to the alien intervention hypothesis. We knew better for we have tasted the potential of humans working together with skill, cooperation, and a unifying presence.

In this I think we found an answer to those who would say our trek was a frivolous indulgence in Egyptophilic fancy. We caught a vision of what is possible for human beings—human beings who love wisdom and are endowed with resources and ability to bring reality-reflecting symbols into embodiment, for no other purpose than to support the process of human beings themselves becoming the living symbols you seek.

Learning To Be Human is a curated selection of Jason Stern's "Esteemed Reader" columns available in book form. Click here for more information or to get your copy.

Photographs by Jason Stern from his recent trip to Egypt.