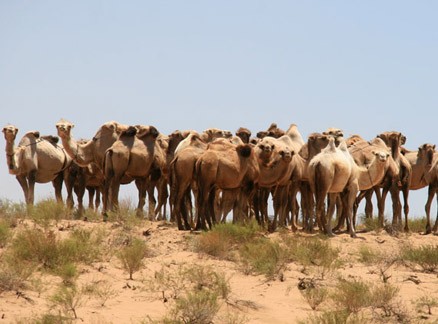 I am faced with problems with no apparent solution every day, and yet the solution is always there, though many times it does not seem to come from within the context of the problem.

For instance this afternoon my six-year-old came running into the house. "He hit me!" he said, furious that his friend had played too rough. "What happened?" I asked, and he told me his story. "Would you like a glass of lemonade?" I asked. "Yes!" he said, drank the lemonade, and ran back outside to continue his play. Problem solved.

The solution to a problem is perpendicular to the line formed by the dyad of the difficulty. The answer is neither compromise nor transcendence. It is something wholly new, a third element or possibility that changes everything.

The story that follows—"Dividing Camels"—is about, among other things, problem solving. It is a teaching tale from the Sufi tradition. For the careful reader, the story contains a great deal of meaning, particularly availed by allowing the mind to hear harmonics of analogous ideas or images from completely other disciplines.

To milk the meaning from the story, it is helpful to listen to the sound of the words as they resound within. This is always helpful in reading—to hear one's inner voice giving the text a vibration within the mind—and it is imperative with picture-form, or metaphorically structured texts that contain more than one level of meaning.

The psychologist Carl Jung suggests we begin with the assumption that every character and element in the story is representative of some agency or capacity within our own person. For instance, who, in me, in the story that follows, is "the master?" What, in me, is "his sons," "his students," "the camels," the mysterious traveler? What is the inner meaning of 17, 3, 1/2th, 1/3rd, 1/9th, and 18?

Observe in the story the phenomena of the pseudo-solutions contrived when we cannot bear to stand in front of an insoluble problem. Fatigue reliably arises at some point in every process of problem solving. It is at that moment that a false fix is found—one that is incongruent with the task at hand. It is then that the need giving rise to the problem is ignored, and a completely new process begun, though under the same name.

Finally we see that the agency of problem-solving costs nothing. The most effective form of help is intangible, leaves no trace, and in the real world is free. Many times this takes the form of knowledge or information that doesn't change the event itself, but rather changes the way circumstances are perceived and therefore addressed.

There was once a great teacher who wanted to make sure that his students would, after his death, find the right way forward.

Just before his passing he left instructions that his worldly wealth should be divided between his three sons. He was a world traveler yet all he owned was 17 camels. He therefore, after all the obligatory bequests laid down by law, left his three sons 17 camels, with this instruction:

"You will divide the camels among the three of you in the following proportions: the oldest gets half, my middle son, one-third, and the youngest shall have a ninth."

Then he died. As the will was read, his sons as well as his disciples were completely baffled by his impossible instructions, which, as is traditional, must be carried out, to the letter. Clearly, they couldn't chop a camel in half or kill one of them. After much pondering, someone said, "Let us own the camels communally," others sought advice outside the community and said, "We have been told to make the nearest possible division," others were told by a judge to sell the camels and divide up the money; yet others held that the will was null and void because its provisions simply could not be executed.

Then they fell to thinking that there might be some hidden wisdom in the master's bequest, so they made inquiries as to who could solve an apparently insoluble problem. Everyone they tried ultimately failed, until the arrival one day of a certain teacher, who happened to be passing through the area and who was respected by many but also suspected by others. Some community members begged him to solve their conundrum.

"I came here on my camel. I will give it to you. So, now you have eighteen. This is your solution. With eighteen camels you can give half—nine camels—to the eldest son. And you can give a third to the next son—six camels. And you can give a ninth of the bequest to the youngest—two camels. A total of seventeen. Aha! One camel left. I'll take that one—and I'll be on my way."

This was how the problems of that particular community were solved.

Learning To Be Human is a curated selection of Jason Stern's "Esteemed Reader" columns available in book form. Click here for more information or to get your copy.

A River Runs through the Classroom: K-12 Programs at the Beacon Institute for Rivers and Estuaries Sponsored