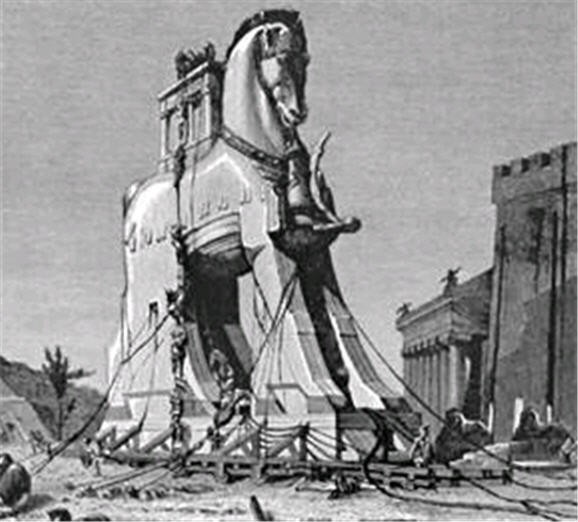 Once again, we need to observe, observe our inner gestures of refusal, our clutching at whatever we are lost in.  The way is clear. We need to learn to make a gesture of relaxation and learn to renew it.  Through relaxation we can become free. —Pierre Elliott

The two young boys and I were lying in darkness. I was telling them about Odysseus and his great wooden horse. I described how the Trojans marveled at the horse, thinking it was a parting gift, and then rolled it inside; and how, in the darkness, the Greek warriors emerged and opened the gates for their marauding comrades to come in and win the long war. So exciting it was hardly a bedtime story.

I was planning to continue as far as the blinding of the Cyclops, and told about our heroes trapped in the cave, eaten by the monster a few at a time. The boys had heard it before so they jumped in when the Cyclops, Polyphemus, asks Odysseus his name, and he slyly answers—

“Nobody!” the boys yelled in unison.

And just as they blurted it out we heard a strange sound outside our house, like a loud whistling, and then boom, boom, CRASH!

“Put on your coats and come outside!” I told them, as I grabbed my phone and dialed 911, for I already knew there had been an accident.

Across the street in a field we could see the outline of a car balanced on its side, smoking, engine running, wheels still spinning. I took a breath and prepared for the worst as the boys followed me over.

Arriving, we found a tall young man, stumbling around the field, face covered in blood. I took his shoulders and looked in his eyes; they focused in on mine. He looked scared, confused. He smelled of liquor. “You’re OK,” I said, as much to myself, as to him. “Now, sit down.”

Beside him was another young man, his head between his knees. When he looked up we saw blood coming down his face in little rivulets. “Don’t call the cops,” he mumbled. “Just relax,” I said. He began talking about how his life was ruined. I took off my coat and put it around his shoulders.

I looked at the car, which was crushed flat. It was impossible to understand how these young men had avoided being mangled beyond repair, let alone emerging from the car to sit on the grass. It appeared to be a miracle.
As the police cars and ambulances drove up, turned on spotlights, rolled the driver and passenger away on stretchers, and began studying the scene, the boys and I moved away.

“How did they survive that crash?” the older one asked. “The car is destroyed!”

“They must have been really very relaxed,” I heard myself say, thinking they were quite drunk.

In that moment, I marveled at the effect of their drunkenness. Though the young men in the car probably would not have gotten into the crash had they not been drinking, it was likely the resulting state of relaxation saved their lives. Ironically, what had gotten them into trouble got them out.

So often I find myself tensing in the face of shocks—I was tense in that moment, with the stress of an accident outside my door. Faced with a challenge, I am afraid to relax, afraid that I will spin out of control and crash.
Sensing the tightness in my shoulders, and jaw, back and solar plexus, I realized I had the choice to relax. I saw that when I sense and inhabit tension, other possibilities besides the dual extremes of fight or flight come into view.

Relaxation, of course, is more than a physical event. It truly begins when I relax my thoughts, turning attention to the real, living impressions entering the senses, and away from memories and interpretations, images and phrases that clog the mind and supplant a direct perception of what is.

The tension is often emotional—whether it is the shock of being criticized, the shock of reading news of terror and destruction, or the shock of another person’s anger or resentment. The tension creates an urge to battle or run.

As we walked back across the street to our house, I felt the boys’ warm hands firmly holding mine, and I relaxed more deeply.

In the bedroom once again, the boys clamored, “Can we have bedtime all over again? Tell us how Odysseus escaped from the Cyclops!”

“No,” I replied. “We lived our own adventure story tonight. Now lie in your bed, and relax your body. Let go of this day and let yourself sink gently into the wooly arms of sleep.”

Ready for a Reset? Try This Sufi Breathing Exercise to Empower Your "New Normal" Sponsored