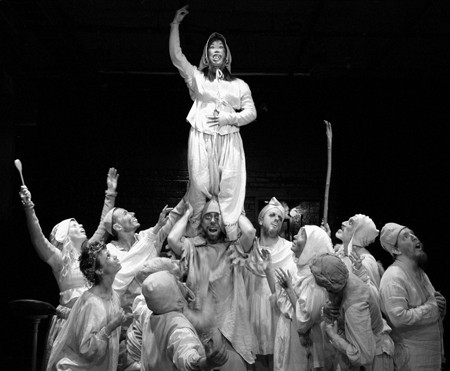 Without a recommendation from a friend, I would not have attended the theater group Dzieci's "Fool's Mass" a few Sundays ago. When he shared news of the performance, something clicked—the decision to attend required no comparison of this or that option, no question of wanting or not wanting to go, being an action in which the choice and its actualization were equally inevitable.

"Fool's Mass" was mounted in the Old Dutch Church in Kingston, appropriate for several reasons: because the drama is a mass, because both are anachronisms from a medieval setting, and because the church—like the play—gives an odd sense of colliding worlds. This church feels like a spaceship that landed in millennia past and was simply built around for new purposes. Its cemetery is filled with ancient gravestones sculpted with reliefs of faces resembling the goddess Hathor and inscribed with mysterious, masonic symbols; obelisks stand guard outside the entrance like the teeth of a tuning fork, just as they do at the entrance to the temple Karnak in Luxor.

The resonant atmosphere of the Old Dutch Church has attracted unlikely luminaries like Queen Juliana of the Netherlands with her consort, Bernhard, and later her daughter the princess Beatrix. When I am in Kingston I almost always sneak in and sit in the empty church. I don't know why, but I always sit in the pew reserved for the pastor, and when I arrive with my son for "Fool's Mass" I am ushered to this seat.

The mass begins with the whole cast—a group of awkward and innocent village idiots with terrible teeth—guiding the audience to their seats. The interaction brings the whole audience of about 20 people immediately into a state of alertness. Something different from the conventional passive experience is afoot—it appears we will be required to interact with this outlandish group of imbeciles. My son tugs on my sleeve and asks with some urgency, "Are they acting?"

Once the audience is seated, the actors slowly make their way up the aisle to a makeshift altar, each player making contact with each audience member in their character's way. Each is their own type of imbecile—rapt, disturbed, or inspired by something apparent or unknown. One shell-shocked crone steps in front of each audience member, looking deeply into the person's eyes and becoming increasingly troubled. She shouts "No!" in one man's face. Despite full anticipation, the man inevitably jumps. Another actor finds a seat in a pew and gazes into space.

The mass seems about to begin, but then we learn that the idiots' mentor, the priest, has died. There is much Sturm und Drang and the flock of fools yells and beats one another as they metabolize this news and let its implications sink in. A kind of ringleader, seemingly more aware of the audience's judgments, frequently repeats "Sorry, sorry, sorry...sompsing ees wrongk, very, very wrongk." Finally the group (or the force operating through them) determines that the mass will go on.

It begins quietly and then grows louder—the sound of sweet voices singing medieval Latin polyphonies. The audience looks around to see where the melody is coming from and then, to our surprise, we discover that the group of bent and retarded fools is giving voice to this angelic sound. The contrast is so sharp I begin to weep.

There is a brief homage to the priest, who, it is revealed, has taught them to sing. Then the mass continues with a reading by an audience member and an inspired scriptural mashup by a seraphic oddball. There is a telling of the Christmas story replete with donkeys, wise men, and a nativity that gives birth to a loaf of bread, thus solving the problem of providing the Eucharist. With shouts of "flesh!" and "blood!" the mass is finally fulfilled with a profound sense of arrival after an arduous journey replete with fertile hazard at every turn.

The group repeatedly breaks into beatific song, and each time I experience bewilderment. I see that I am the group of imbeciles—that the cadre of fools is me, forever awkward, obtuse, and stupid; and despite my handicaps and impediments, like them, I occasionally, miraculously give rise to a manifestation that is profound, beautiful, and completely out of character. The performance makes it clear that truth and beauty use any and every means to shine into the world.