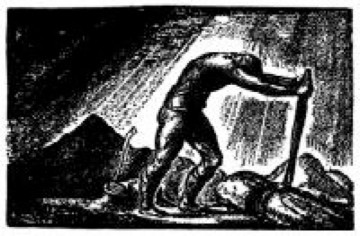 At that time, also, there upon your planet, all the three-brained beings began to consider themselves and those like themselves merely as beings bearing in themselves particles of the emanation of the Sorrow of our UNIQUE COMMON CREATOR.

—G. I. Gurdjieff, All & Everything

Driving my two children to school this morning, I had the impulse to turn on the news. What came on was a report on the new round of Israel's battering of the people of Gaza. Another 32 people were killed and hundreds more wounded—most of them women and children. A family of four was killed when a shell crashed into their apartment. It was only about 20 seconds of news, and I quickly turned it off.

"What are they talking about, Dad?" I heard from the back seat.

I was surprised to find that I could not answer, as my throat was tight with emotion and tears began to roll down my cheeks.

Finally, I answered, almost gasping, "It's about war."

"No," I managed with effort, "a different war, an older one." And I gave probably the briefest explanation ever of the formation of the modern State of Israel, the multiple wars on Israel by its neighbors, and the displacement, ghettoization, and repression of Palestinians.

And then we arrived at school. I looked in turn into each of their eyes and kissed them goodbye. One stopped and turned back—"But why are you crying, dad?"

"Because it's so sad that people need to destroy each other."

Alone, I drove in silence. The tears had stopped. I was alone with my thoughts, and wondering why I had begun to cry. After all, it was a slight variation on the same news I hear every day. The numbers of dead and wounded; the civilian casualties; the slaughtered "women and children"; these are descriptions I have heard so many times that they have stopped carrying meaning or significance, and yet the news this morning touched a bit of the sorrow that lies beneath my veneer of habitual thoughts and patterns.

I feel that I and most of us have become immunized to the suffering and alienation we experience in the world around us. It has all been so packaged and normalized by media representations that we don't feel the depth of separation we have from our own conscience and from one another.

Considering the state of humanity, the words of Colonel Kurtz in Apocalypse Now resound in my mind— "The horror... the horror..."

If we face the truth, we can acknowledge that we live in a dark time. It may be that feeling the full impact of its darkness is all that can awaken enough sorrow to shear away the layers of callous that prevent our selves from being touched. There is a great defensiveness at work, and we are thoroughly inoculated with a world view that supports and justifies a society that continuously perpetrates crimes against the essential being of everything. We are taught, for instance, that we live in the most advanced state civilization has known in the history of humanity on earth, and the proof of our advancement is the abundant, sophisticated technology that gives so much control over the material and energies of nature.

But is the complexity and specialization of physical knowledge and ability proof of advancement when we use those tools to dominate and destroy one another and the planet that is our paradisiacal host and home? Is it a sign of progress when we use our tools to gain for ourselves at the expense of others? Is it proof of a high level when our knowledge of psychology is used to manipulate people's thoughts or sell us things we don't need? Is it mastery when we use our impressive instruments and systems to make more and useless, meaningless stuff to fill the void of our psychic emptiness?

It is a great arrogance that is able to disregard all earlier civilizations, when we might instead seek to learn something from them. It is a defensive arrogance that allows us to view civilizations like the ancient Egyptians, Mayans, Babylonians, and others that sustainably existed in peace and prosperity with high culture for thousands of years, as primitive and superstitious. We derisively project onto their magnificent, durable works egoistic motives akin to our own. But looking at the inherent beauty and subject matter of ancient Egypt's works, for example, it is clear that values at the center of those cultures gravitated around understanding the meaning of the cosmos and the human being's place in it, and that their mysterious but advanced technology was in service of that.

Meanwhile, what are our monuments a testament to? Power for the sake of power, personal egos, corporate brands, imprisonment, and indoctrination. Our tallest buildings belong to the empty, mostly meaningless activities of commerce, banking, brainwashing (media and education), and superstitious, dogma-based religion.

The suffering that can be felt in the face of the spiritual bankruptcy underpinning human society and interaction, and consequently all institutions, can be a source of useful suffering if we have an aim of freedom. Of course, if we wish to comfortably trod the treadmill of meaningless life, or particularly, if we aim to run faster on the treadmill than our compatriots, we should steadfastly ignore the urgings of our buried conscience to perceive the empty state of the world as it is.

But if we wish for something more, we might make a study of how a world guided by conscience might be organized. For instance, such a world would not need some groups of people to dominate others, because we would understand that we are all one people, part of one body, with each person a unique cell in a larger body, containing a spark of what could be called the divine. For instance, instead of educating our young to be extruded into occupations that form the machinery of pointless, meaningless, and destructive activity, we would seek to discover the innate talents and creative proclivities that lie within each being, and draw them out to their fullness, allowing each maturing person to find a natural, productive place within the larger organism of meaningful society. For instance, our constructions would be monuments to and reminders of the possibility and real evolution of human beings. For instance, instead of elevating those who are the best lackeys, liars, and criminals to business, academic, religious, and political positions of power and wealth, we would elevate those who are most dearly connected to their innate intelligence, accomplished in their inner work, and have an ability to truly be of service to their fellow beings, "bearing in themselves particles of the emanation of the Sorrow of our UNIQUE COMMON CREATOR."

When I bring to mind this vision of a possible society, I feel that this, which might be described as having the characteristics of a golden age or utopia, is, in fact, normal. Feeling this eventuality as normal, I see and accept that the current state of life and its supporting paradigms are empty and fallacious. But I see where I am going, and each moment, each interaction, each step, becomes the act of making a new world.