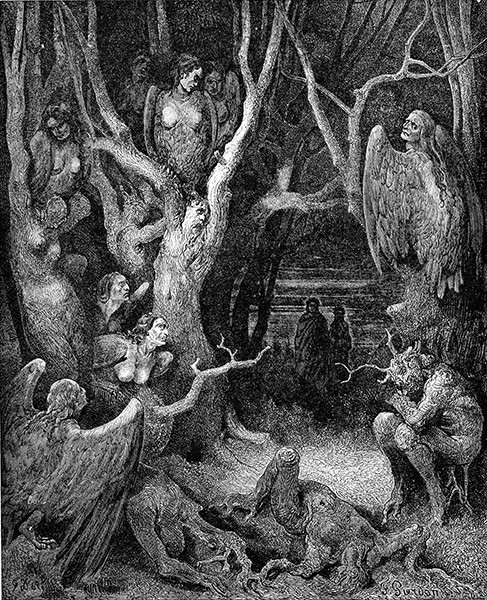 The readiness is all.

Sometimes life gifts a shock, an event that reveals its fragile preciousness, offers a moment of pause, a glimpse beyond the fabric of the interpenetrating and hypnotic rhythms of embodied existence.

Dante, beginning The Inferno, describes such a moment in one pithy canto:

Midway along the journey of our life

I woke to find myself in some dark woods,

for I had wandered off from the straight path.

Dante appears to describe a midlife crisis: a premonition of death in which life as lived thus far passes before one's eyes. With this perception of imperfection, one feels impelled to set it right—to realign with conscious or unconscious values, put away the frivolous and unnecessary, and focus on the essential.

For Dante, that powerful moment of awakening was the conception of a masterpiece, his rebirth, The Divine Comedy.

Whether it's accident or fate, biology or astrology that opens this portal, it doesn't matter. More to the point is how we use the shock of a fresh perception of ourselves and our deeds to find a path that is straight.

How interesting that almost every tradition's scriptures reference this straightness. For example:

Make straight the way of the Lord, as said the prophet Isaiah.

Get up! Stir yourself! Learn wisdom at the Master's feet. A hard path, the sages say, the sharp edge of a razor.

The shock of midlife is but one example, and there are many, almost always surprising events that can jar a person to wakefulness, to feel the beautiful, tragic profundity of existence.

Recently, the news of the death of a beloved friend and teacher caught me by surprise. The shock granted entry to a raw and open state, a sense of poignancy about myself and others. It swept away my habitual callousness and left me able to take in a larger spectrum of the ugly and beautiful, wrong and right, pain and pleasure together. I found I was able to feel a depth of compassion for others and myself that is ordinarily hidden from my consciousness.

I was reminded of the final passage from Gurdjieff's opus All & Everything in which his protagonist, the devil, says:

"The sole means now for the saving of the beings of the planet Earth would be to implant... into their presences a new organ... of such properties that every one of these unfortunates during the process of existence should constantly sense and be cognizant of the inevitability of his own death as well as of the death of everyone upon whom his eyes or attention rests."

It's a passage I have considered many times over the years, and feeling its veracity, set myself, as a youngster, to undertake and practice and continuously note the inevitable demise of myself and others. Ultimately, it was an exercise in futility, if not counterproductive, as it played into an habitual morbidity more than serving as a shock into greater perception and wakefulness. Perhaps I just wasn't ready for such an advanced practice.

That said, there are numerous prescriptions for meditation on death in the spiritual traditions, as Joyce suggests in Dubliners. ("The monks sleep in coffins, assert the guests; Mary Jane explains that it is to remind them of their mortality.") Jesuits visualize themselves as Jesus nailed to a cross, dying. Hindu saddhus eat, sleep, and meditate in the charnel grounds where the bodies of the dead are perpetually burning. The Sufi admonition is little different, but clear: Die before you die (and elaborated: "In order to be born, you must first die; in order to be die you must first awaken").

If a person is not a serious practitioner of one of these traditions, she is left to benefit from the concussions afforded by life—crises of various kinds, death of loved ones, birth of a child, our own near-death or otherwise life-shaking experiences—to be rattled awake, and face real life unmitigated by the familiar and known.

This kind of raw, perceptive wakefulness is not a mental thing. It doesn't come about entertaining a new philosophy or thinking different thoughts, or even doing some imported meditation practice. It is fundamentally an emotional event, a disturbance of our pattern, which is why such immediacy of perception can't be contrived.

After all, you can lead a horse to water, but you can't make him thirsty.