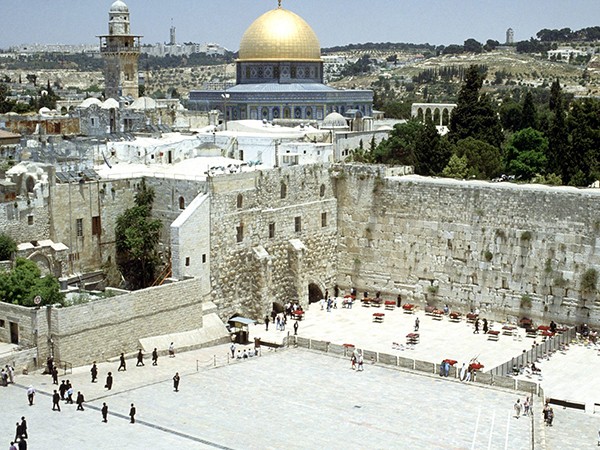 "Holy Love refers to the fact that when you really suspend all comparisons, all judgments, and all opinions, you will experience reality as an unalloyed positive value through all the sense modalities. It is pure goodness and its expression is always goodness."   —A. H. Almaas, Facets of Unity

We wandered through the tight, shadowed alleyways of the Arab market, or souk, looking for the entrance to the Kotel, the Western Wall of the oldest Jewish temple in the world, in Jerusalem. Here and there a sign would appear in Hebrew, English, and Arabic, and we would go in that direction, only to find ourselves in some deserted section of the Old City. Finally, after several reversals, at last the entrance appeared.

We descended a labyrinthine staircase with high stone walls and came through the gauntlet guarded by soldiers and metal detectors. It was intimidating, but as we left the narrow area and stepped into the expanse of the plaza, I was confronted by something like an invisible force field. It wasn't repellent but rather felt like the atmosphere had become palpably dense. I looked down at my son, who's nine, and he looked back inquisitively.

A few thousand people were gathered in growing density as we moved closer to the ancient wall, which rises 60 feet above the plaza. Many were praying with fervor and intensity, rocking rhythmically with their prayers; some were singing or chanting, and others prayed quietly, with a force of concentration.

The place had the quality of a beehive, with so many workers busy making a certain kind of energetic honey that could be felt and even almost tasted in the atmosphere.

After offering our own prayers, foreheads pressed against the ancient stones of the wall, we went through a gate and covered bridge into the area called the Temple Mount on the other side of the wall. This is the place of Dome of the Rock and the Al-Aqsa Mosque.

The Dome of the Rock is perhaps the single most impressive intact building I have beheld, so complex in its overall design and detail. It is a work of almost unfathomable grace and sacred geometry built in 700 CE around the foundation stone of what was the holy of holies in King Solomon's temple. For Muslims it is the sacred site of Mohammed's Shob-e-Miraz, or Night Journey.

Groups of men and women were gathered all around the plaza, some reading aloud from the Quran, others chanting verses in beautiful, resonant eastern melodies. Visitors went in and out of the dome, and then came the call to prayer, the haunting chant of Allahu Akbar, La Illaha Il Allah, Mohammed rasul Allah (Allah is great; There is no God but Allah; Mohammed is the Prophet of Allah). As the call came, people streamed into the mosque to pray.

The atmosphere had a different quality from the other side of the wall, but it was equally intense.

Later, we walked a few blocks to the Church of the Holy Sepulchre, where Jesus is said to have been buried and then rose again. The church is magnificent, albeit schizophrenic, because it is shared by every denomination and reflects all their unique architectural styles. As we arrived, the Coptic Christians were chanting in an alcove toward the rear of the church. Their voices were deep and resonant, and at first we thought they were chanting in Hebrew, for it surely was no western language, nor was it Arabic. Then we realized it was Coptic, the latest stage of the Egyptian language that the Coptics, the earliest if not original Christian sect, still use for their liturgy.

Soon the Roman Catholics arrived on the far side of the church, fired up the pipe organ, and began to chant their mass in Latin. It effectively overwhelmed the Coptics in their corner, though to their credit, they persisted and were still praying long after the Catholic service was concluded and the congregation dispersed.

Later, at a cafe we talked. "The Jews, Muslims, and Christians look different, but when they pray they are all doing the same thing," my son observed.

From our vantage point, all the religious people performing their rites were, with the special emanations of their prayers, making a kind of energetic honey—a nectar that is unusual and fine—and through the results of their continuous practices over thousands of years, have helped make Jerusalem a place that can only be called holy.

This honey-making, we felt, emanating the stuff of a more fully human inner life, is fundamentally good; even while, at the level of politics, people of different religions and ethnicities struggle to destroy one another's existence.

At this level of real prayer (or meditation, or conscious work, or mindfulness) there is only one effort, which is to emanate in a way that is balanced and human, so as to create a finer atmosphere for ourselves, for one another, and to fulfill our part in nourishing the cosmic harmony.

What is Jewish Renewal? Sponsored

Art of Business: Q & A with John Carroll, Healer