The Awesome Mystery Of Nature 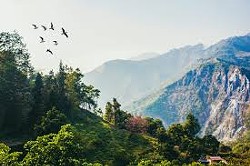 "What unity, for example, could be perceived by even the most brilliant physicist, philosopher, or theologian while he still trips absent-mindedly over a stool, becomes angry at being short-changed, fails to notice when he irritates his wife, and in general remains subject to the daily trivial blindness of the ordinary mind, working with its customary absence of awareness? Any unity he reaches in such a state can exist only in his imagination."

—Rodney Collin, The Theory of Celestial Influence: Man, The Universe, and Cosmic Mystery, 1954

For me, wellness begins in a worldview that perceives the unfathomable intelligence of nature and the lawful, balanced ecosystems that form her body. In this view, human, animal, and plant life are part of one organism. I'm a cell in the organ of humanity, in the body of organic life, in the being of Great Nature.

I experience the unity of nature not as a pleasant idea, but as a fact. With this perception comes a corresponding feeling of trust in her capacity to organize herself, and respect to desist from meddling in her designs. I also perceive that there is an energetic matrix, including consciousness, underlying the physical world of objects and bodies. In other words, physical phenomena do not give rise to life and consciousness, but rather consciousness and life give rise to physical bodies.

So the fractal ecosystem of nature exists atop a substrate pattern of life completely invisible to instruments that measure phenomena in the world of objects. The only instrument that I know of that can perceive and measure the underlying energetic matrix invisible to scientific instruments is the human instrument, with the caveat that the instrument is not only thinking, feeling, and sensing but is also conscious of itself.

To be in the face of the awesome mystery of nature gives rise to a profound humility, notably absent from the prevalent mode of science. Can we evolve a science and medicine that is able to be humbled in the face of this mystery; that works in our uniquely human manner with our big head brain, in harmony with our mother, the great body of which we are a part?

I suspect humanity has had such science and medicine in antiquity but we don't recognize it from the perspective and values of the prevailing paradigm. Its indications are present in the monuments and traditions surviving from the preindustrial past. Our current science and medicine are profoundly primitive, simply because they look at the part to the exclusion of the whole.

In contrast, holistic health modalities are so named because they address the terrain of the whole person. They take into account not only one's physiological state but also one's inner life and vital energy. They consider the environment in which a person lives as well, including the presence of toxins in food, water, air, and the electromagnetic spectrum; the presence of healthy, engaged, in-person relationships. They also consider the emotional atmosphere, the absence or presence of fear, anxiety, and depression. True holistic health modalities seek to find and address the causes of illness, not suppress symptoms with technology.

The holistic view sees illness as the means by which a body cleanses and rebalances within its own intrinsic, intelligent ecosystem. In this view, illness is something to allow and support with cleansing and nutrition, and with the result of increased resilience. Holistic health modalities see that suppressing symptoms, both individually and collectively, increase the force of the underlying causes of illness.

Can there be a science and medicine of wholes, that utilizes powerful methods of inquiry and discovery to work in harmony, rather than against nature; that includes the humility of the understanding that "I don't know"; that respects the underlying fabric of life and consciousness?

I believe there can be such a science, that humanity is destined for this. The first step, I think, is acknowledging the limitation of the worldview that sees nature as an enemy to be defeated with technology and begins to inquire into more fundamentally harmonious means of actualizing our purpose.