Famed for their reworkings of modern popular songs into a pre-World War II jazz-swing format, Postmodern Jukebox was formed by New York pianist and arranger Scott Bradlee in 2011. The orchestra’s versions of tunes by artists ranging from Lady Gaga to the White Stripes, Katy Perry, Radiohead, Outkast, and the Strokes made them a hit on YouTube in short order, winning them fervent fandom from the likes of Neil Gaiman, among others. Here, the outfit’s Grand Reopening Tour takes them to the suitably opulent setting of Troy Savings Bank Music Hall on October 28 at 7:30pm. (Chris Thile picks October 16; Ben Folds bops by October 17.) Tickets are $29.50-$54.50. 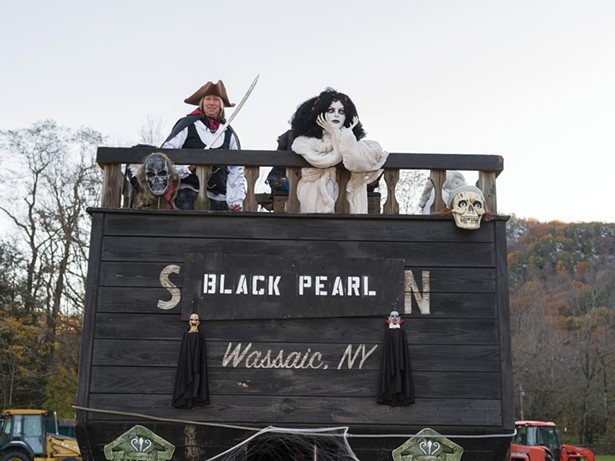 The ingeniously creative and community-minded folks at the Wassaic Project are back with another artistic family fright fest. Last year, they staged a haunted parade with artist-designed floats and tons of free candy. This year, they’re producing Haunted Hamlet, featuring seven PG-rated art installations/trick-or-treating stations around the grounds on October 30 from 3 to 7pm. There’s also a giant plinko game, a mutant forest, and a Halloween-themed “Let’s Make a Deal” game led by a zombie game show host. It’s followed by the Monster’s Ball at the Lantern with live music, DJ sets by Taraka, and a costume contest. (Monster’s Ball tickets are $20 and must be purchased in advance, and all attendees must wear a costume.)

Following a yearlong hiatus due to COVID-19, Safe Harbors of the Hudson will be hosting its second annual Newburgh Literary Festival. The weekend-long event will feature an in-conversation event with Joe Donahue, the award-winning host of WAMC/Northeast Public Radio’s “The Roundtable.” Eight nationally acclaimed writers from around the Hudson Valley will engage in paired readings and moderated conversations, including Pulitzer Prize finalist Evie Shockley and Erica Hunt, author of Jump the Clock: New and Selected Poems. Attendees can check out a local authors’ book sale and participate in a series of writing workshops. Learn about writing contemporary horror from David Surface, playwriting and dramaturgy from Shane Bly Killoran, and graphic novels from Drew Morrison.


Sculpture Show on View at Tilly Foster Farm |
through October 31

On October 30 at 9pm, come experience The Rocky Horror Picture Show the way it was meant to be: In a beautiful, historic venue like the Paramount Hudson Valley Theater in Peekskill, with live a shadow-cast performance by the Apoca-Lips troupe. In this cult classic, sweethearts Brad (Barry Bostwick) and Janet (Susan Sarandon), stuck with a flat tire during a storm, discover the eerie mansion of Dr. Frank-N-Furter (Tim Curry), a transvestite scientist. As their innocence is lost, Brad and Janet meet a houseful of wild characters, including a rocking biker (Meat Loaf) and a creepy butler (Richard O’Brien) during a series of elaborate dances and rock songs. Tickets are $10.


“Fragments of Time and Space” in Hudson |
through October 31

The exhibit “Fragments of Time and Space” at Carrie Haddad Gallery in Hudson brings together four regional painters—Anthony Finta, Ginny Fox, Carl Grauer, and Joseph Maresca—and pairs their work with abstract wall structures by Dai Ban. A show standout is Grauer’s Coniferous Sky, a five-foot-tall painting documenting a pine tree between November 2020 and March 2021. The trunk and its branches stand unchanged, dominating a sky that has been segmented to track shifting clouds and changing light. See website for gallery hours.