Out With the Old, In With Renewable 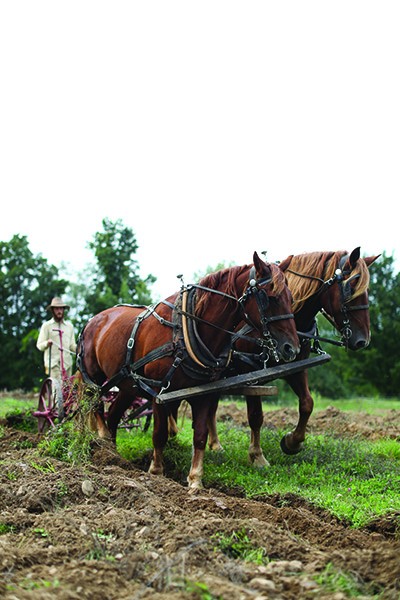 On an April afternoon, 50 business leaders, farmers, and local and state officials gather in a small barn at 5 Spoke Creamery in Goshen. Outside, 270 feet of solar panels glint blue in the afternoon sun.

"I hope this is a model for the rest of the Hudson Valley and New York State," State Assembly Member James Skoufis says. New York State's first commercial Property Assessed Clean Energy (PACE) financing helped fund those winking blue plates in the field by the creamery.

PACE financing is organized by Energize NY Finance, the state's new funding program for renewable energy and energy-efficient technologies on existing commercial buildings. The financing is based on the project's potential energy savings. The loans are repaid through annual tax charges on the property, not unlike other utilities like electricity or water. If the property is sold, the loan automatically transfers to the new owners.

At the beginning of the presentation, an introductory video is projected on a drop-down screen. A friendly faced Alan Glustoff, the owner of 5 Spoke Creamery, a dairy farm that specializes in cave-aged cheeses, is shown explaining the benefits of the solar-enabling loan while tending to his cows. He says that the solar array provides "more than enough power to meet 100 percent of needs and then some," while decreasing his creamery's environmental impact.

In 2013, the United States Environmental Protection Agency reported that electricity made up 31 percent of domestic greenhouse gas emissions. That same report stated that agricultural methane emissions contributed 14 percent globally, not including the electricity or transportation required to run the facilities.

As these gases rise into the atmosphere and block the sun's rays from escaping back into space, global temperature rises, ice caps melt, and severe weather wreaks havoc. By switching to renewable energy, the level of agricultural greenhouse gas emissions can be significantly decreased.

A recent report by the Environment New York Research & Policy Center found that New York has the potential to produce 11 times as much electricity from solar power as the state consumes annually.

In a 2003 presentation, David Wooley, director of Windpower NY, said that New York's wind energy potential, particularly around the farmlands in the Central and Western regions, is greater than that of California.

By switching to renewable energy sources, Hudson Valley farmers can not only minimize the amount of greenhouse gases emitted, but also save on costs. With financing programs like PACE in place, alternative energy sources are more feasible than ever before.

An Inventor Plants a Seed

When Ron Khosla and his wife, Kate, started Huguenot Street Farm on a 77-acre plot in New Paltz, he made her a promise. He would farm with her for two years, and then he would go back to the high-tech world, where he was the founder of several Internet-based tech start-ups. "But I couldn't leave!" Khosla says, laughter bubbling up. "There was so much innovation in farming. It was more fun than anything I was doing in the ether, in the fake world, in the virtual world."

His first agricultural adaptation was a solar-powered tractor constructed using a cultivating model from the `50s. "I just wanted more power, better torque curves, and no repair bills," he says. Instead of profiting from his solar-electric tractor schematics, he posted them for free online so anyone could build them. He estimates that there are now "hundreds and hundreds and hundreds" of tractors based on his design in use across the country.

Next came a do-it-yourself heating system for the greenhouse. The design cut their heating bills by 90 percent—which means, in Khosla's terms, the materials paid for themselves within the first season—and then he and Kate got a free vacation in Jamaica every year after.

They looked into solar panels next, but quickly realized that despite the grants and subsidies available, the quotes the solar installers gave them were astronomical compared to those listed online. So, as per his style, Khosla took matters into his own hands. They bought a truckload of solar panels and gathered a group of people to help construct them.

Their electricity bills were chopped in half, due in part to Khosla's fourth and officially patented invention: the CoolBot. The CoolBot is essentially a hacked air conditioner whose lowest setting is overridden, allowing it to pump frozen air into a tightly insulated space as an alternative to commercial walk-in coolers. While the CoolBot may not cool down as quickly as commercial coolers, it uses half the electricity. They've been sold to approximately 22,000 customers, the majority of whom are farmers.