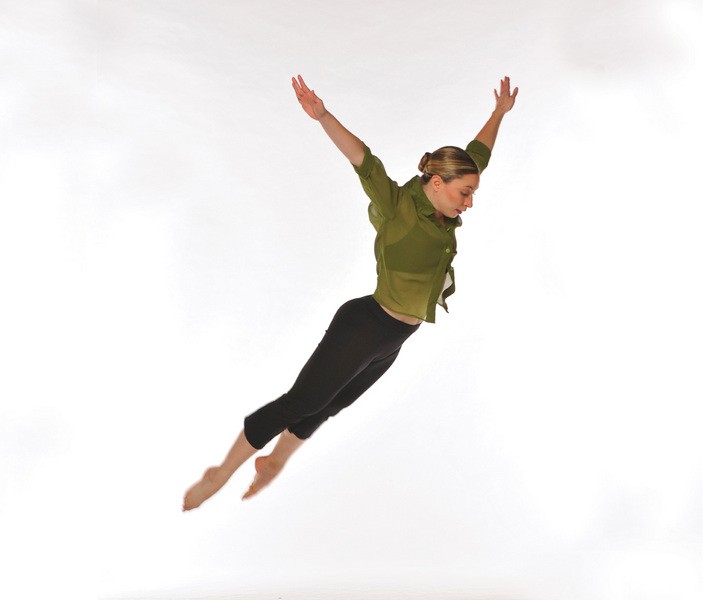 The Ellen Sinopoli Dance Company (ESDC) will be traveling a few exits down the Thruway from its resident perch at The Egg in Albany to perform at the Kaatsbaan International Dance Center for one night only on Saturday, December 3.

Settling in the Capital Region in 1991 after spending her early years training with some of the most esteemed teachers of modern dance (Ethel Winter of the Martha Graham Company, Viola Farber of the Merce Cunningham Company, and Dan Wagoner of the Paul Taylor Company, among others), Sinopoli has synthesized her diverse background into her own ebullient style, choreographing over 65 works. Asked where she gets the inspiration for her dances, Sinopoli says, “Whether it is an arresting Wendy Williams ceramic, a photography book of stunningly carved seats from Africa, the haunting story behind the movie The Secret of the Roan Inish, the stunning performance of bassoonist Krassimir Ivanov, the cloth paintings on the studio walls of Kaatsbaan, or the brilliant imagination of architectural designer Frances Bronet, the embryonic seeds are always there—just as long as I keep my eyes open and my body aware.”

Collaborating with over 25 artists of varied disciplines (including architectural designer Frances Bronet, sculptor Jim Lewis, and composer Hilary Tann), Sinopoli’s Spill Out!, a surreal, other worldly, athletic full evening multimedia work, was voted #1 of the top 10 shows of 2006 by the Albany Gazette. Voted one of the “100 Women of Excellence” by the Albany Chamber of Commerce, Sinopoli has also received the “Educator of Excellence” award from local ABC-TV affiliate WTEN.

Among the organizations having commissioned works from Sinopoli are the Schenectady Symphony Orchestra, (which included performing with the orchestra to compositions by Aaron Copland and Leonard Bernstein), The Egg (for their Leonard Bernstein “Living Legacy Celebration,” a collaboration with jazz clarinetist/saxophonist Don Bryon’s ensemble), and the Albany Symphony Orchestra. ESDC has performed at Avery Fisher Hall and St. Mark’s Church in Manhattan, Ozawa Hall at Tanglewood, the Inside/Out stage at Jacob’s Pillow, and has received funding from the New York State Council on the Arts for multiyear, general operating support, individual artist projects, and three long-term residencies at Kaatsbaan.

This year’s Kaatsbaan performance will include three works from the ESDC repertory; A Gathering in Red, Departing (with music by acoustic and electric violinist Cornelius Dufallo), the snazzy, sultry, effervescent Brink (with music by jazz trumpeter Dave Douglas), and Vooz-é-la (set to four songs by Zap Mama, who mixes soul, gospel, pygmy song, and Afro-Cuban rhythms), as well as a preview of a new work which will be premiered at The Egg in January 2012. An athletic work filled with joy, To Sing, Laugh, Play is danced to a score of excerpts from contemporary classical composer John Adams’s “John’s Book of Alleged Dances.”

A master teacher of dance technique, composition and improvisation, Sinopoli is currently on the faculties of Russell Sage and Siena colleges. Bringing dance to urban and rural schools in under-served communities through arts-In-education programs via residencies, workshops, and performances, ESDC exposes children to the creative process. By embodying the connectedness between art and everyday life, ESDC has illustrated to parents and teachers how contact with dance at a young age creates not only respect and understanding of the art form and its performers, but also plants the seeds that sprout future artists.

The Ellen Sinopoli Dance Company will perform on Saturday, December 3 at 7:30pm at Kaatsbaan International Dance Center in Tivoli. Tickets are $25 for adults, $10 for students. (845) 757-5106; www.kaatsbaan.org.