"I never thought I would make political art. Never!" remarks Elizabeth Phelps Meyer. But her new show, "Each Day, Water: A Monument for the Water Protectors of Standing Rock and Beyond," at Art Centro Gallery in Poughkeepsie, tells another story. The exhibit opens October 2.

Life changed for Meyer in 2016 when she saw a photo of army tanks aiming at Sioux teepees in North Dakota. Native American protesters at Standing Rock Indian Reservation were confronting the Dakota Access Pipeline, which was prepared to cross the Missouri River. "For me, Standing Rock was an awakening. I saw those tanks pointed at those teepees, and I said, 'I can't believe this is still happening!'" Meyer recalls. Four days after Donald Trump took office, he approved the Dakota pipeline, and on February 23, 2017, the last protesters were cleared from the Standing Rock encampment. But the "water protectors" movement continues, led by Native Americans throughout our continent. Currently, Louisiana activists are staging tree sit-ins to protest the Bayou Bridge pipeline. 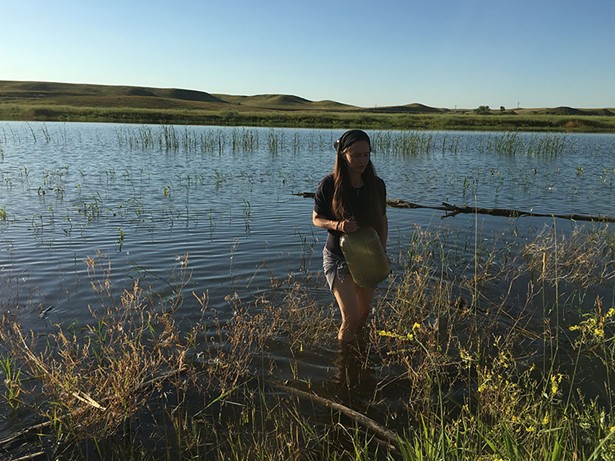 Meyer made a pilgrimage to North Dakota in July to extract water from the Missouri River and the Cannonball River. LaDonna Tamakawastewin Allard, one of the founders of the Standing Rock encampment, told Meyer: "Your art will help heal your own river"—meaning the Hudson. The artist also gathered water from the Hudson's headwaters, and from Henderson Lake in the Adirondacks.

"Each Day, Water" is an installation of 365 wood-fired porcelain vessels created by Meyer in the last two years. Mounted on the wall are cups bearing water the artist gathered. Visitors to the gallery are invited to bring water from their own locality—tap water, spring water, bottles filled in lakes or rivers—to add to the collection. This water will be poured into cups at the center of the gallery, which are set out in the four directions of the traditional Native American medicine wheel.

While visiting the Dakotas, Meyer asked water protectors and allies for statements, which she recorded. The show includes four listening stations with headphones, so visitors may hear these testimonies. As one attends to the voices, while gazing at the pottery, one can imagine that the vessels are speaking.

"When I started making the cups, I wanted them to be beautiful and to honor the water protectors, but I also wanted them to reflect the violence towards indigenous people," Meyer reveals. "It was a question of: 'How can I balance the beauty with the violence?'" Part of her strategy was to use porcelain, a material associated with European high culture, but to subject it to wood-firing, which creates erratic burn marks. Meyer also modified each cup before setting it in the kiln.

"Each of these cups is a circle that has been pressurized—stretched or bent or dented, or just ragged at the edge," Meyer reveals. We speak of the "mouth" of a cup, and the mouths of these cups have vivid expressions; some seem to be sneering, cursing, moaning, or singing. Looking at dozens of the cups, each one twisted or distorted in a different way, is almost like watching the play of...water.

Meyer doesn't sell her art, but offers it as a gift. On the last day of the show, anyone can take a cup, though she asks for a gift in exchange—specifically a donation to the Mní Wičhóni Nakíčižin (Defenders of the Water School) in North Dakota.

A series of lectures, films, discussions, and performances relating to the water protector movement will be offered at the gallery.

Elizabeth Phelps Meyer's show, "Each Day, Water: A Monument for the Water Protectors of Standing Rock and Beyond" at Art Centro Gallery in Poughkeepsie, will run October 2-27. (845) 485-8506.