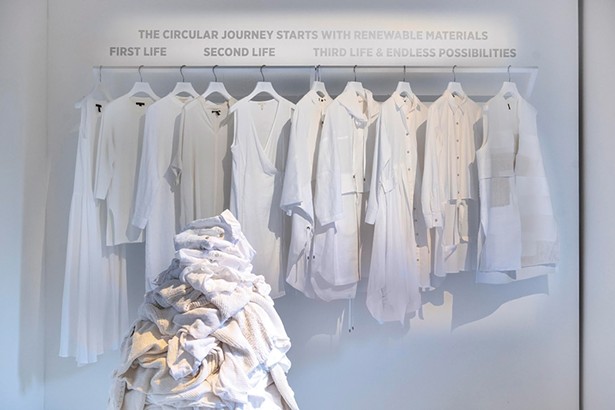 One million garments would be enough to populate a landfill. Instead, one Hudson Valley-based fashion brand wants to return garments to your closet and lead the fashion industry toward a sustainable future.

The Eileen Fisher headquarters in the Westchester village of Irvington are located in a 40,000-square-foot former Lord & Burnham factory, which manufactured greenhouses until the late 1980s. Today, the saw-toothed roof—designed to optimize light without trapping heat—looks like a row of yogis in downward dog position.

Eileen Fisher, the woman and the brand, was once associated with women who have tidied up and closed the door on the decade between their 20s and 30s, maybe even 30s and 40s, and are ready for the breezy, uniform-like garments of the unbothered.

In 2017, the popular fashion blog Man Repeller deemed the look "menocore" (after menopause) and announced that young women were now lusting for it. "Menocore is the aesthetic leap to styles we would embrace as middle-aged women, taking us forward in time to a more marinated version of ourselves, our mothers, and our world," Harling Ross wrote. This moniker, and sentiment, was echoed across fashion media.

Eileen Fisher eschews trends, but the resonance of the brand with the present moment is more than just aesthetic. In 2009, before the concerns about climate change had reached the fever pitch we're experiencing today, the brand began informally collecting used Eileen Fisher garments from its employees. By 2015, they were taking used garments back from customers as well and reselling them for a discount under the label Green Eileen, now known as Renew. That same year, artist Sigi Ahl paired up with the brand to create new garments and felted textiles from the old ones. These works have been exhibited and sold as part of the campaign Waste No More since 2017.

Eileen Fisher has now collected over a million garments, and the brand estimates they bring in 2,000 to 3,000 units every week. Each garment returned West of the Mississippi is sorted in Seattle, and everything to the East is sorted in Irvington. The Irvington operation, nicknamed Tiny Factory, was opened in 2017 across the street from the headquarters.

In February, the UN hosted a Sustainable Fashion Summit in New York to discuss how the fashion industry can support the goals of the Paris Agreement and other international environmental commitments. "Sustainability is no longer a trend, but a business imperative," says the nonprofit Global Fashion Agenda. An oft-repeated factoid that "the global fashion industry is the second most polluting industry in the world," has been debunked by experts. However, some of the industry's impact is confirmed in a 2009 Business for Social Responsibility report: 18 percent of carbon emissions from a single garment come from fiber production, 16 percent from yarn production, and 39 percent from consumer behavior (washing and, ultimately, disposing of it.)

"The best thing you can do for a garment is keep it as it is," says Carmen Gama, a designer at Eileen Fisher. But that's not always possible. Gama says that only 40 percent of the garments returned are sellable and resold through Green Eileen. The standard for sellability is high, and garments that make the cut are laundered locally in Westchester County. A quarter of returned clothing is termed "not quite perfect" with minor flaws and resold at select stores. The remaining 35 percent is too damaged to resell and falls under the re-manufacturing efforts of Waste No More, which has just launched its own website and social media channels.

Previously, these clothes were recycled into limited-edition garments, like a jumpsuit made from five to seven pairs of discarded jeans. Eileen Fisher is now focusing renewal efforts on the textiles by dismantling and machine-felting the garments to create new raw material. Fisher tells me that the impetus behind this shift is scalability.

"We've been trying to do both, and I think what we found with the clothes is that they're not so scalable. It's not so easy to do—they all become one-of-a-kind, practically," says Fisher. Now, the Tiny Factory hums with the sound of machines fondly termed Lanettes, after the woman who sold the brand its first felting machine back in 2015.

From the Andes to You: Ethical Alpaca Knitwear from ELEVEN SIX