We Are the Dreamers of Dreams 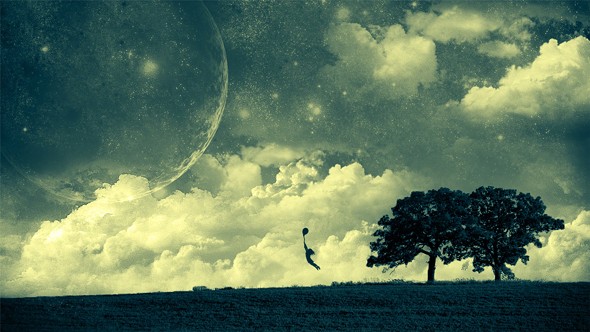 If you want to view paradise

Simply look around and view it

Anything you want to, do it

There's nothing to it

Raise your hand if, sometimes, you get overwhelmed by the world. And by "the world," I mean all the forces that must be reckoned with, both internally and externally: work, finances, marriage, family, physical and mental health, school shootings, climate change, childhood trauma, politics, ambition, social injustice, fear of death, and on and on. Your trigger issues around overwhelm may be different from mine. Perhaps you're struggling to deal with parents in decline, or relationship failures, or seasonal affective disorder. Combine this with the incessant input of news and information across ever-expanding multimedia platforms, and it can have a frenzying effect akin to listening to Billy Joel's "We Didn't Start the Fire" on repeat until you go slightly bonkers.

For me, it takes the form of feeling paralyzed by the devastating effect humans are having on the planet. There are specific stories, like the one I read in mid-February about a baby dolphin being passed around on an Argentine beach so people could take selfies with it. The dolphin reportedly died of dehydration. Or the larger story that Elizabeth Kolbert tells in her shattering The Sixth Extinction: An Unnatural History, about the mass extinction of other species we are currently perpetrating. Kolbert estimates plant and animal loss by the end of the 21st century to be between 20 percent to 50 percent of all living species on earth. Homo sapiens rules the earth with cruel indifference to other animals (save our beloved pets) and for the future of our own species.

It's more than enough to make me feel as if I've fallen in a hole, or to develop a sudden and troubling interest in hiding in one.

Thankfully, the human psyche runs on hope, a seemingly limitless fuel source that helps us envision change and work toward its implementation—regardless of whether or not we have any chance of success. It's easy to lose sight of how empowered we are, what degree of change is possible, and how many people are advocating new solutions to old problems. Part of our mission at Chronogram is to shine a light on people and projects that seek to redefine the status quo through imaginative engagement, to tell stories that chart new paths through creativity, curiosity, and empathy. (The metaphor of light here reminds me of that never-say-die proverb: It is better to light one candle than to curse the darkness.) To my ongoing amazement and gratitude, these light-worthy tales are thick on the ground—too many to cover comprehensively in a monthly magazine, even a regional one.

The process of change and adaptation begins with imagination. Psychiatrist Bessel van der Kolk, a renowned trauma expert and author of several books, including The Body Keeps Score: Brain, Mind, and Body in the Treatment of Trauma, says "Imagination is everything." In "Sing, Act, Dance, Heal" (p. 76), Wendy Kagan examines how creative arts therapy can be a portal to healing and growth that is unavailable through conventional talk therapy. In April, van der Kolk is leading an experiential workshop at the Garrison Institute on exploring the healing of traumatic stress through the arts. Creative expression, be it acting, writing, or dancing allows participants to embody new possibilities and rewire the brain to create new connections. Because of the neuroplasticity of our brains, we can literally become the change we wish to see.

For those of us raised within rigidly structured social environments, mental flexibility isn't always our first response. For a kid who went to Catholic school like myself, it's tough to imagine a mode of discipline in an educational environmental other than one based on crime and punishment. If you get caught breaking the rules, you suffer the consequences. It's just like our legal system, and similar in how it deals out penalties but not accountability. But a approach to discipline in the schools has been taking shape over the past couple of decades, one that puts the emphasis on responsibility over punishment. In "Restoring Community," (p. 22), Hillary Harvey reports on the restorative justice movement, which is influencing how schools use empathetic self-governance as an alternative disciplinary model.

As Mika Dashman, founder of the Restorative Justice Initiative, tells Harvey, "We need to disentangle the concept of punishment from accountability. We live in a culture that equates those two things. We make this assumption that when we put someone away, they're going to reflect on what they did and the harm they caused, but that's not necessarily what's happening at all." Restorative justice envisions the school as a stakeholder group who all take equal responsibility for maintaining their community. If harm is done by someone in the community, the group seeks justice as a way to restore the community, not punish an offender. This is an especially important development for black students, who are suspended or expelled at a rate three times greater than are white students. (This ongoing practice of isolating of minority students from pre-K through high school has earned the name the "cradle-to-prison pipeline.")

When faced with the enormity of the challenges facing us, it's refreshing to remember that we have the opportunity to imagine a different future than what we're living now, and the capabilities at our disposal to strive for it. Think of it as a restorative justice model for the planet. It's like the mind-science Willy Wonka drop in the film: "We are the music makers and we are the dreamers of dreams." We may not realize all of our ambitions, but we can begin by dreaming.