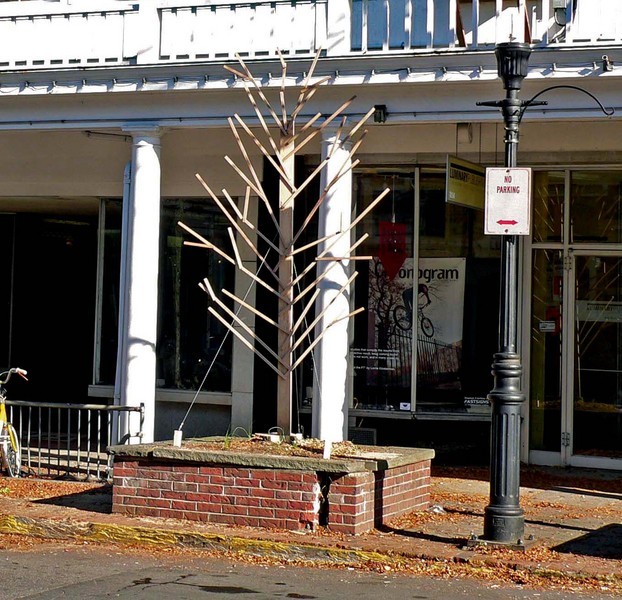 There’s no definitive story on why the trees were cut down outside our office in Uptown Kingston. Depending on whom you ask, it’s either due to a disease that was afflicting the trees, the branches overhanging Wall Street were a safety hazard, or the brick planters were being cracked apart from the inside out by the growth of the root balls. Some are certainly true—the planters are clearly crumbling—and some perhaps just rumors. This much is incontrovertible: One week in early November a crew of arborists with a bucket truck, a chipper, and a slew of chainsaws cut down six mature trees, leaving a handful of stumps and a street that had much of its scenic charm carted away as sawdust.

A few days later, a stenciled Lorax-esque graffito appeared on the surface of the stumps: “i am kingston.” And then came the plywood tree.

Just a two-by-four with two dozen crudely made plywood branches glued to it, planted in a hand-cut notch in the stump, and stabilized by three thin wires that appeared one morning. No paint, no varnish, no leaves, and no lights.

And yet. And yet, a grace note on a street full of stumps.

In music, a grace note is a kind of ornamental addition to the main note, playing off the main but stealing part of the time allotted for its own purposes, the accent often startling. On Wall Street, while we wait for new trees, or fewer trees, or no trees—whatever clangorous tune the city chooses to play, this grace note lingers, longer than expected.