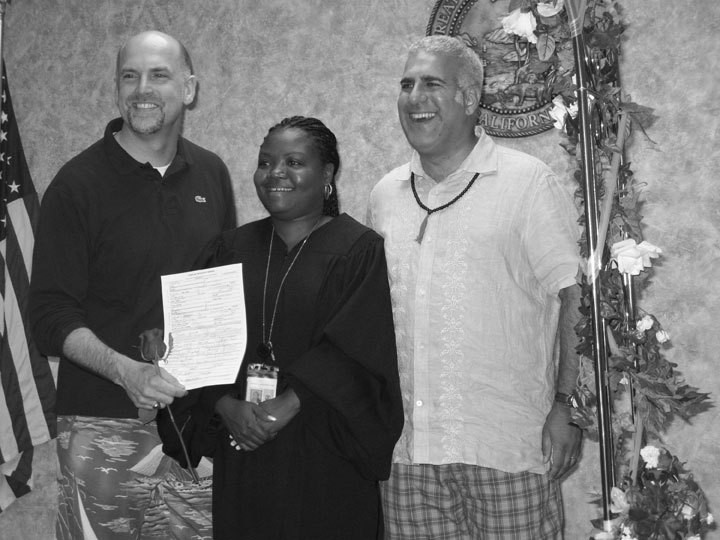 Lee Anne and I had been dating for almost a decade, and living together for five of those years, when we decided to declare our intention to bond for life in a public ritual. On Memorial Day weekend in 2003, we exchanged vows in a Quaker ceremony on a small island off the coast of Puerto Rico in front of our family and friends. Everyone was barefoot. The sun set in the Carribean Sea behind us. After the exchange of rings and vows, our friend Joe Brill shouted a solemn “Shazam!” and that was it. Lee Anne and I were committed. We repaired to the hotel for Coronas and shark nuggets.

But we were (and are) not legally married. Ours was (and is!) a spiritual marriage. Lee Anne has a perfectly functioning surname that she has kept. She is not my wife and I am not her husband. Lee Anne and I refer to each other as “partner.” (When I feel especially cheeky, I crib Spalding Gray’s line and call Lee Anne “my ex-girlfriend”—how Gray referred to his label-averse first wife.) The only time I refer to Lee Anne as my wife is in the presence of officialdom, where our alternative status might be a complicating factor. For instance, when we went to the emergency room last summer so I could get stitches in my elbow after crashing my bicycle, I introduced Lee Anne to the doctors and nurses as my wife. In the unlikely event that I was to go into a coma while getting sewn up, I wanted there to be no question as to who should call the shots regarding my health care. As Lee Anne and I are a “conventional” couple—a man and a woman—no one was likely question the validity of Lee Anne’s claim as my advocate or ask to see our marriage license.

This was not the case for my colleague Jay Blotcher. (Jay’s preview of the Hudson Valley Shakespeare Festival’s performance of the Bard-based farce “The Complete Works of William Shakespeare (Abridged)” is on page 121.) When Jay’s partner Brook was diagnosed with Lyme disease in early July and had to admitted to the hospital, Jay made sure to bring their health care proxy in case anyone questioned him. No one did, but it explained Jay’s response to my question about their recent marriage in California, “Why get married?”

“It’s not about the toaster,” Jay said, “it’s about the health care.”

Among other things, as Jay informed me. Like the 1,300 rights immediately conferred upon a couple when they are married—chief among them health-care benefits, health proxy, inheritance, child custody, and immunity against testifying against your partner—that are not covered by domestic partnerships or civil unions. For Jay and Brook have jumped through those hoops already: In April 2000, they were declared domestic partners by New York City. In October 2000, they celebrated a civil union in Vermont. In February 2004, they were the fourth same-sex couple to be married by New Paltz mayor Jason West. (All the same-sex marriages West solemnized were later annulled.) That’s why Jay and Brook flew to California to get married just days after Brook was released from the hospital. “Everyone should have the chance to get married, screw up, and get divorced,” Jay said.

For those unaware of the legal issues involved: On May 15, the Supreme Court of California declared the state’s ban on same-sex marriages unconstitutional. Same-sex marriages were solemnized beginning on June 16. On May 29, Governor David Patterson issued an executive order directing all state agencies in New York to recognize same-sex marriages performed in other jurisdictions, offering de facto legal reciprocity in New York for same-sex couples married in California, Massachusetts, and Canada. As is to be expected, conservative legislators have filed a lawsuit against the governor. The question of marriage equality is far from resolved in New York, to say nothing of the larger question of the nonexistent rights for same-sex couples on the federal level.

It’s a sad irony that Lee Anne and I, who do not wish to be legally married, enjoy almost all the rights accorded to married couples, while Jay and Brook, who’ve celebrated their union more times than Kid Rock and Pamela Anderson, still do not.

Congratulations Jay and Brook. Your new toaster is on its way. I hope it’s your last, but I’ll gladly send another if you need to tie the knot again. You must really like toast.

***Get your weekly dose of Chronogram on Monday mornings at 8:15 with Brian and Greg Gattine on “The Morning Show with Gattine and Franz.” WDST 100.1FM.

10 of Our Favorite Restaurants in Putnam County