Elephant in Kingston Closes After 12 Years of Business 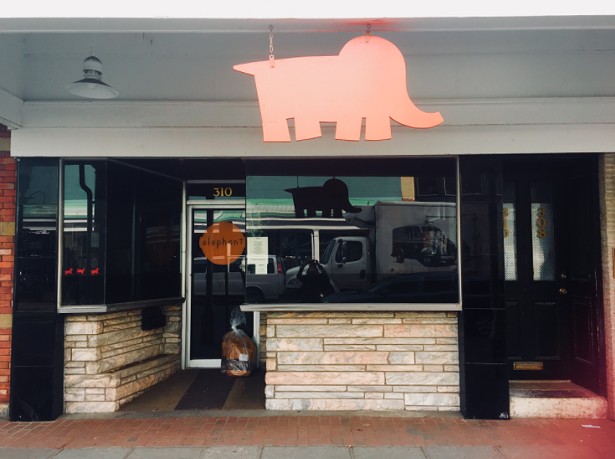 "What's the point of trying to please everybody? We can't fit them in here anyway."

Back in the early aughts, Lee Anne and I used to frequent a place for brunch called 23 Broadway. The food was mediocre, but the Bloody Marys were good, the atmosphere was cozy, and it was within walking distance of our house. It wasn't great, but it was our Sunday place and many a New York Times crossword was worked in its precincts.

Then one afternoon, we noticed something had changed at 23 Broadway. The steak and eggs were being served with duck eggs, gloriously rich and vibrantly golden-yellow; there was a thoughtfully curated cheese and charcuterie board; a small selection of tapas suddenly appeared on the menu, hidden on the back of the regular menu. The food tasted phenomenal. Someone who cared deeply about what he or she was doing was now cooking here.

After a couple more exceptional meals, I needed to find out who was behind this. So I got up from our table and walked into the kitchen. There, I found a big guy with a shaved head and tattoos on his arms nonplussed to see a diner stroll into his kitchen. I asked him what the hell he thought he was doing, and he told me. That's how Rich Reeve and I became friends.

Fast forward a few years. Joe Concra [1], an artist who owned a building Uptown on Wall Street, was in need of a tenant for his ground floor retail space now that the band who had been storing their equipment there, Mercury Rev, was moving out. Joe called his old friend Rich, who had cooked at a couple different restaurants since 23 Broadway [2]. Joe suggested that Rich, who had never owned his own place, should open a restaurant in his building. Lease terms would be favorable.

Now, for those who don't remember what Uptown Kingston was like in 2006, here's how I described it in a profile I wrote of Elephant shortly after it opened:

"Uptown Kingston is in a bit of a slump. Retail businesses have been especially hard hit, with vacant storefronts sprouting like so many daffodils. The bagel shop closed less than a month after it opened. Hickory BBQ, which took over a prosperous luncheonette from Jane's Ice Cream, is gone. The billiard hall that opened for a couple weeks in the former Woolworth's building is a glass mausoleum for two dozen pool tables. The city closed the Chinese restaurant with the 1950s "Chop Suey" sign for code violations. The parking garage at the corner of Wall and North Front Streets—always an eyesore, but a useful place to park—is ringed with a six-foot high chain-link fence and is being torn down."

At the time, life in Kingston was a bit of a bummer, but Joe convinced Rich and his wife, Maya Karrol, to take a chance. What followed was a restaurant build-out camouflaged as community barn-raising, with friends [3] pitching in their expertise—general contracting, electric, plastering, stencil creation, and painting, on a shoestring budget. Observing the building process as it progressed, the sense of shared vision from all involved was evident in the hard work that doubled as earnest play. The DIY, "let's-put-on-a-play" ethos was hardwired into the place.

Elephant, a 40-seat eatery, opened to acclaim in 2006 [4]. In the kitchen, Rich made a virtue of necessity: Instead of installing a commercial stove and ventilation system, an investment in the tens of thousands of dollars, he planned a tapas menu around his limitations. "One day I sat down and came up with 444 dishes I could do without a stove or a grill," Rich says. Some of those early dishes—roasted marrow bones, chorizo and chocolate, whipped salt cod crostini, blood sausage dumplings in ginger broth, pork belly and clams, snail toasts, and sautéed beef heart—not only subverted expectations but also compressed big flavors into small dishes with almost magical finesse.

Elephant represented a new spark of creativity [5] in the city, in the region, and it became a clubhouse of sorts for a cross-section of gourmands, record store employees, writers, yoga instructors, boutique owners, artists, restaurant industry folks from near and far, musicians, and culinary pilgrims from out of town, all grateful in their good fortune—that such a place as Elephant should exist in Kingston. That it should exist at all in a world of bloodless, lowest-common-denominator cooking and renew our faith in food.

Well, Elephant exists no more. On March 24, Rich cooked his last order of tacos al pastor [7]. Maya served the final glasses of Cava. The final song on the record player was "Tonight" by Iggy Pop: "I am going to love her to the end / I will love her until I die / I will see her in the sky, tonight."

Twelve years is a long run for a restaurant, especially one so innovative and expectation subverting. A long run for a joint that never played it safe, lived its ideals, and always played the music loud. If you didn't like it, you didn't have to be there. Maybe what bonded us to Elephant was its appeal to the uncompromising, punk rock part of ourselves that we still cling to, despite the day-to-day bullshit that grinds our souls down till we're all beveled edges and no jagged points. Or maybe the food was some of the most revelatory we're likely to ever eat.

[1] In 2010, Joe Concra co-founded the O+ Festival, which manifested the city’s creative spirit in a physical way, visually transforming Kingston with enormous and colorful murals painted on the sides of drab brick buildings.

[2] Lee Anne and I followed Rich around to each new restaurant like a couple of food groupies.

[3] Too many to name, but one not to be missed: Richie Serringer. RIP.

[5] And that spark kindled a fire that we are still basking in the glow of. It’s worth noting that Elephant was the trailblazer for many now-iconic institutions like Stockade Tavern, Fish & Game, Boitson’s, and Phoenicia Diner, to name a few. Those of us we enjoy the cultural flowering that’s taken place in Kingston in the past decade have a lot to thank Elephant for.

[6] One of the most hilarious moments of the 2014 O+ Festival occurred at the Literary Salon, when Rich took the stage to read Elephant’s Yelp reviews, accompanied by Sean Gallagher on accordion. Here’s an excerpt of one Rich read from Nikki B. of Flagstaff, Arizona: “Do NOT go here. There is a full-on lunatic working there! Because I need gluten-free, I asked a few questions about what I could eat that didn’t have gluten. Suddenly, a man who I can only assume is the chef, comes out from the back and starts yelling at me to get out, telling me that I have been yelling at his waiter. Because I asked a few questions! I never raised my voice until he pulled the table out for me and told me to get the F out. I’ve never been more shocked or appalled in my life. I am not a New Yorker, so maybe that’s my problem; I am just not used to this! Everyone should know about this lunatic.”

[7] Lee Anne and I ate it. The pork belly and pineapple tasted more bittersweet than usual.