Editor's Note: The Cave of Secrets 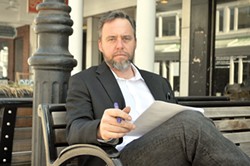 "Truth is stranger than fiction, but it is because fiction is obliged to stick to possibilities; truth isn't."—Mark Twain

Remember when people read novels? I suspect some of you still do. We review them in this magazine, for goodness sake, so I personally know a few people who do. And yes, it's true that copies of 1984 and A Handmaid's Tale started flying off the shelves last fall. (I wonder how many were actually read.) But who has the time and inclination to read complex narratives in 2017, when a cauldron of digital distractions sings its siren song on Facebook, Instagram, and Twitter? When the newspaper headlines would be entirely implausible if they appeared as plot lines on "House of Cards"— from the front page of the June 23 New York Times: "Shifting Funds From Poor to Rich Is Key for the Health Bill." It's hard to look away from the twisted reality, the emergence of a new normal that's anything but, unless you consider grown men behaving like power-mad kindergartners normal.

But this spring, I started reading novels again anyway. Out of desperation, really. How many times a day could I refresh my feed to check the latest outrage from Washington and maintain my sanity? And besides, Lee Anne and I had finished season two of Aziz Ansari's brilliant "Master of None" on Netflix. I needed distraction. I longed to read about people with some subtlety, depth of character, and trace of human feeling.

Luckily, there was a pile of unread books on my desk, many sent by publishers looking for reviews for their authors. Over the course of a month, I tore through a dozen books. Funny ones (Nathan Hill's The Nix), sweet and hopeful ones (Grief Cottage by Gail Godwin), goofy postmodern ones (Jonathan Lethem's A Gambler's Anatomy), epic histories (Hilary Mantel's Wolf Hall) and sprawling critical darlings (A Visit from the Goon Squad by Jennifer Egan). They were all lovely in their way, ferrying me across the expanse of a quiet afternoon or a midnight's insomnia (with only a few manic interludes of device checking, as per the new normal of our always on, always hungry digital consumption patterns).

The book that grabbed me though, was Paul La Farge's The Night Ocean. (Jennifer Gutman reviewed it in the March issue.) The book is ostensibly a historical mystery about an acolyte and sometime collaborator of horror author H. P. Lovecraft, R. H. Barlow, who may or may not have been Lovecraft's teenage lover for a brief period in the 1930s. The novel is a wild ride through a series of false narratives that ultimately yield a larger truth. (We can only hope for such an outcome from our current political moment.)

In one of The Night Ocean's plot threads, Lovecraft, in his mid-40s, visits the teenaged Barlow at his parents' home in Deland, Florida. The pair have bonded over their shared love of weird tales, which were published in pulp magazines, and Barlow shows Lovecraft his collection of books and magazines, kept in a closet he calls Yoh-Vohombis. (The name comes from a sci-fi horror story by Clark Ashton Smith, "The Vaults of Yoh-Vohombis" that's an Alien precursor.) Let's put aside for a moment the too-neat symbolism of the closet and Barlow and Lovecraft, doubly marginalized for their literary taste and sexual orientation. And don't let our minds wander toward what a terribly apt euphemism Barlow's Yoh-Vohombis might be for Lovecraft.

I mentioned earlier that the novel grabbed me. Here's why: I've spent time in a room very similar to Yoh-Vohombis. La Farge's novel sent me spinning back through time to my grammar school days and my friends Don and Jack. Don and Jack were brothers (and still are, presumably), two years apart in age. Don was the older one, and wore glasses. Jack tagged along after Don mostly.

Don and Jack (never Jack and Don; always Don first) lived around the corner, on 211th Street, and they went to public school. Curiously, all the rest of my friends, like literally a dozen of them, lived on 210th Street and all went to Catholic school. (Our house faced 28th Avenue, bridging the blocks.) My 210th Street friends—Tommy Reagan and his six older brothers, John Barbagallo, Christian Mueller, Joey Di Simone, Jeff Donahue, Joey DiPietro—were all sports nuts and we played every version of every ball game and variant of run-around grab-assery we could think of. On rainy days, we'd start a board game that would invariably never get finished because of a physical altercation due to a perceived slight or real instance of cheating. Cheating was just another part of the game on 210th Street.

Don and Jack never played on 210th Street. If I wanted to hang out with them, I'd ride my Green Machine (a much cooler version of a Big Wheel that had stick shift controls) around the corner and we'd play at their house. We wouldn't play sports—Don and Jack weren't sporting types. (I once tried to teach Don how to play golf and accidentally brained him on my back swing, sending him running inside crying. It seems like somebody was always running inside crying in those days.)

We playacted from movies and TV a lot, pretending we were Han Solo and Luke Duke and the Six Million Dollar Man in some odd cross-dimensional fictional mash-up. We constructed elaborate battle scenes with army men in the backyard and then blew them up with firecrackers. We made sci-fi movies with a Super-8 camera, simulating the turbulence of re-entering Earth's atmosphere by violently shaking the chairs we were sitting on in the cockpit of our spaceship.

But most of the time, we read Don and Jack's comic books in a walk-in closet that the brothers converted into a clubhouse filled with all manner of creepy stuff: glow-in-the-dark monster figurines; a furry hand from a gorilla suit; diorama kits based on horror movies like Creature from the Black Lagoon; and comic books with titles like Tales from the Crypt, Creepy, Eerie, Haunted Horror, and Weird Tales. We called it The Cave of Secrets.

It wasn't particularly scary, and nothing much happened there except kids exploring the strangeness of the world outside our insulated childhood. The strangeness was allowed to expand and fill the room. Of course, in childhood, it was easier to keep the horror stories bottled up in The Cave of Secrets. Now they're printed on the front pages of newspapers.