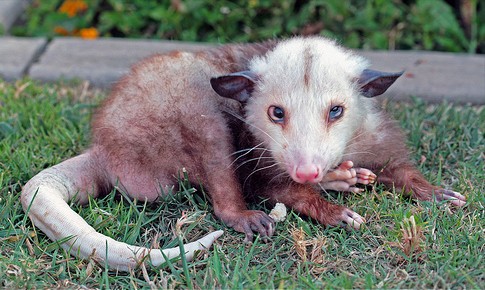 Here are a few things I found out this month while putting this issue of Chronogram together. They run the gamut from tips on how to get a better night's sleep to the Lyme disease-fighting power of opossums. Even in issue 286 of my editorship of the great enterprise that is Chronogram, there is still plenty to learn: about the Hudson Valley, about the world, about myself. (A few years ago we toyed with the idea of changing our tagline from "Arts. Culture. Spirit" to "Local. Global. Cosmic.")

In a yang world, we can all use a little yin. Enter Yin Yoga. As Mary Angeles Armstrong reports ("Turning Inward With Yin Yoga," page 80), the constant sensory bombardment of the technological innovations of 21st-century existence has our mental chatter at an all-time high. We jump from one excited state to the next like the agitated primates we are. (It's called "monkey mind" for good reason.)

Unlike the more active styles of yoga like Hatha, Vinyasa, and Ashtanga, Yin was developed as a preparation for meditation. Think of Yin as the middle ground between active and restorative yoga, balancing long, gentle poses with tuning in to the intuitive wisdom of the body—a state difficult to explain on an intellectual level. Practitioners describe being able to access a "whole-body consciousness" through Yin that helps recalibrate the mind/body equation. Next time you can't sleep, try a few forward folds instead of an Ambien.

Simone de Beauvoir's insights into misogyny are more relevant than ever.

"No one is more arrogant toward women, more aggressive or scornful, than a man who is anxious about his virility." —Simone de Beauvoir. Despite great advances toward gender equality, there's still a general environment of hostility toward women in our society, personified by high status sexual predators like Roger Ailes, Bill O'Reilly, and President Trump. The words of French philosopher and social critic Simone de Beauvoir from her groundbreaking study of sexual repression, The Second Sex, ring as true today as they did in 1949, as Eric Francis Coppolino reminds us ("Beltane: In Search of Venus," page 99).

Don't take a job as a postal worker in Flushing.

The US Postal Service released its annual report on dog attacks on mail carriers in April and noted a slight uptick over 2015 ("While You Were Sleeping," page 20). Here's the interesting bit: The Queens community of Flushing (population 72,000) ranked 27th in the country with 22 attacks, beating medium-sized cities in the top 30 list like San Jose, California (population 1 million) and Las Vegas (population 600,000), each with 21 reported attacks. It's puzzling to think that a less-than-two-square-mile patch of Queens would have more attacks than an entire city. But lest we forget, our combative commander in chief is from Queens. Which reminds me of a joke from the old neighborhood:

Q: What do you think of Flushing, Queens?

Betsy DeVos is unqualified to be secretary of education.

The Hudson Valley is at the forefront of cutting-edge manufacturing.

Unless you're in the business, you probably don't know that there are over 1,000 manufacturing operations in the Hudson Valley. Every day we drive right by nondescript commercial buildings housing some of the region's most innovative businesses, making everything from pharmaceuticals to aerospace products. Manufacturers in the Hudson Valley, like elsewhere in the US, are on the cutting-edge by necessity: Simple manufacturing can be done much more inexpensively elsewhere. What's left? Small-scale, cutting-edge, advanced manufacturing outfits serving clients that demand high precision and incredibly low tolerances. Peter D. Martin speaks with local manufacturers about what's taking shape in the sector this month ("Fabricated Reality: The Hudson Valley's Hidden Manufacturing Industry," page 26).

"When the Hudson Opera House first reopened in 1998, people said the small cadre of volunteers restoring it were crazy," writes our Hudson correspondent, Zan Strumfeld ("Hall of Change," page 89). The historic building, once the site of lectures by Ralph Waldo Emerson and Susan B. Anthony, had sat empty for over 30 years, and renovation on any scale was a daunting task, especially given the disheveled state of Hudson in the `90s. And yet, and yet. Dreamers dream, and put dreams into action. As went the Opera House, so did the city, riding a wave of change over the past two decades. As HOH Executive Director Gary Schiro notes, "This building has helped transform the city." On April 22, the Hudson Opera House celebrated its grand reopening with hundreds of supporters decked out in ball gowns and top hats cheering on the multimillion-dollar rehabilitation project and the theater's renaming as Hudson Hall. Concerts are planned throughout the month and beyond.

In the February 2012 issue of Vogue, Joan Juliet Buck wrote an admiring profile of Asma al-Assad, Syria's first lady, titled "A Rose in the Desert." The article lauded the Assads as a "wildly democratic" couple who made Syria the "safest country in the Middle East." The piece was published right as Bashar al-Assad was launching a murderous campaign against his own restive citizens, who were inspired by the Arab Spring that was sweeping across the region. (According to the Syrian Observatory for Human Rights, over 400,000 people have died in Syria between March 2011 and March 2017.) Buck gets her own profile in our pages this month ("Moral Tales from the World of Chic," page 66). She talks with Sari Botton about her memoir, The Price of Illusion, which details Buck's triumphs, humiliations, and her resilience.

Worried about Lyme disease? Get a pet opossum.

In her interview with Diane Greenberg of Catskill Native Nursery, our gardening expert, Michelle Sutton, discovered an interesting benefit to having opossums in your backyard ("Our Gardens as Ecosystems," page 51). Unlike deer, which can spread Lyme disease, opossums love eating ticks, and can consume up to a few thousand a week. Greenberg suggests leaving dead trees in place for opossum habitat.

So class, what did we learn? Here's a three-question quiz to test your knowledge.

A. The writings of Dian Fossey

B. The dances of Bob Fosse

What are postal workers most afraid of?

A. Rain, hail, sleet, and snow

B. Dogs from Flushing, Queens

Why shouldn't you write about dictators and their families?

B. They cheat at board games