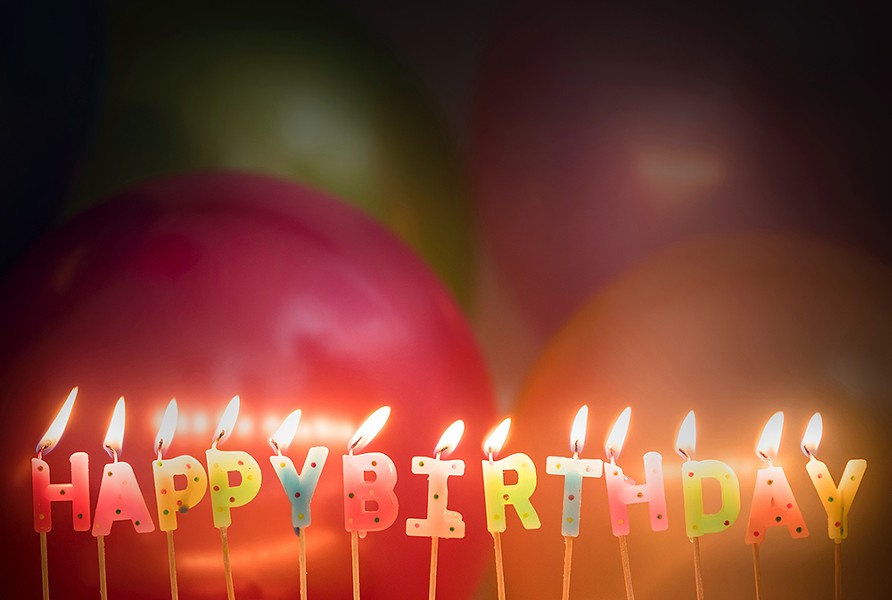 Recently, I celebrated a momentous birthday. By recently, I mean early November. By celebrated, I mean it was technically a celebration ("the action of marking one's pleasure at an important event or occasion by engaging in enjoyable, typically social, activity."), though those in attendance may have felt otherwise at times.

And by momentous, to be clear: it wasn't one of those decade ending/beginning birthday years with a zero on the end. Nor was it the kind of meaning-laden birthday when you hope someone will throw you a big party, and then you get anxious about it and arrange it yourself and invite everyone you know and my goodness, most of them show up and it's overwhelming, like you're getting married to yourself and you regret it all later—but mostly the expense and the megalomania that drove you to want to be feted by hundreds of people. No, this birthday wasn't momentous in that way—this birthday had an 8 on the end of it.

My recent birthday was momentous in the sense that I learned valuable lessons about what not to do on my birthday. While these lessons are somewhat specific to me, a 48-year-old, gender-conforming white male, I hope their wisdom is general enough that non-binary Mongolian schoolchildren and polymorphous perverse Uruguayan gauchos (Chronogram is big in the pampas) can find some guidance/benefit/consolation in my words. So, here's a list of dos and don'ts (mostly don'ts if I'm being honest with myself, though perhaps there's been altogether too much of that already).

Do have a party.

After reading what's to come, you might think better of hosting or attending any kind of birthday gathering. There are a lot pitfalls when it comes to birthdays. But remain calm, be brave, follow my advice, and you might just make it through in one piece.

Do listen to your wife.

I know I've given this advice out before, on multiple occasions, but it bears repeating. She grapples with the thorny reality that you often choose to ignore. When she asks you, "What do you want to do for your birthday?" and you say, "I'd like to have brunch at an expensive, out-of-the-way restaurant that's miles and miles from anywhere," listen carefully to her when she suggests that perhaps it would be easier on your friends and family if you just had a few people over to the house instead. Stubborn and spoiled rotten person that you are, you will think you are "compromising" by proposing a lunch at your favorite French restaurant instead. When your wife ever-so-gently makes the comment that not everyone likes French food, or the formality of a white tablecloth restaurant, and again advocates for a low-key get-together at home, do not exclaim, "Well it's my goddamn party! If I can't eat at Le Canard maybe we shouldn't do anything at all!" and then descend into the type of petulant silence that drives your wife around the bend.

This may seem obvious, but imbibing bubbles before you've had a substantial meal is not a wise choice, as it will set you on a path to early-onset inebriation, which will have other cascading effects despite the fact that it's seems perfectly reasonable to drink Champagne at any hour in a French restaurant.

Don't give a speech.

You'll be sorely tempted. The notes you've prepared will insistently whisper from your pocket, "Read me!" The Champagne and the subsequent Cotes de Rhone will ally with your notes and argue that the time is ripe for you to regale those assembled with witty bon mots. But if you're honest with yourself, you'll acknowledge that no one wants to hear you give a speech as much as you do.

This notoriously pessimistic 19th-century German philosopher really has no place at a birthday party, despite your recent obsession with some of his ideas as they relate to your midlife crisis. Whatever you do, don't start explaining his theory of the futility of desire. Schopenhauer's basic argument is a double-bind: either you have goals in life, in which case you haven't achieved them yet and you're suffering, or you achieve your goals and then you're hollowed out on the far shore of desire, wondering what all the fuss was about to begin with. Don't try to explain the difference between telic (goal-oriented) behavior and atelic (non-goal oriented) behavior and how you're pursuing more atelic activities, like yoga and mindfulness meditation, which will theoretically result in less suffering in your life.

Don't give out books as presents.

In certain cultures, it's common practice for people to give presents on their birthday. Hobbits, for instance, have this lovely custom. It's a wonderful sentiment, but unless you're giving people stuff they really want—Bitcoin is a suitable gift for almost any occasion—skip it. You may already have bought a dozen copies of the book you've been reading to ease you through your midlife crisis—Midlife: A Philosophical Guide by Kieran Setiya—but you don't have to follow through on your grand scheme. Just leave the books ungifted. Being given a book is like being given a homework assignment—it creates an expectation that the book will be read. Are you planning on a quiz as well?

And remember: It's your birthday. Just try and have a good time.