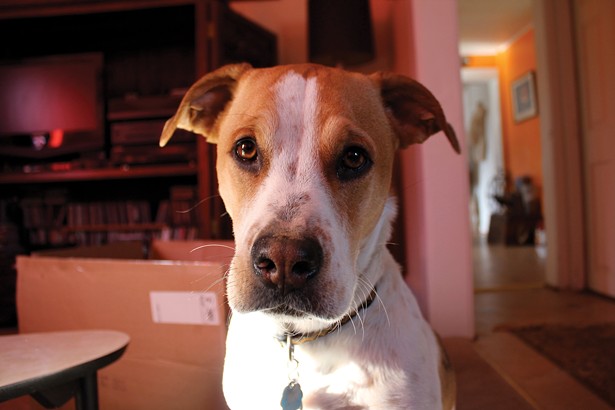 Years ago, we had a groundhog problem. Not only were they eating everything we planted in ourgarden, but the bandits were quite discerning about it, waiting until our veggies and berries were at the peak of ripeness. I’d inspect the strawberries one evening, thinking, “Tomorrow will be the day to enjoy a bowl of strawberries,” and in the morning, they’d be gone, eaten by the plump, scurrying critters who lived under the shed.

A couple days after such an incident, I decided to take action. I got up before dawn with murder on my mind. But first things first: I let Shazam out to relieve himself and fed him breakfast. Then, I went back upstairs to my office window, which has a good view of the shed and the 30 feet of lawn between it and the garden. I crouched in the window with a pellet rifle like Oswald in the book depository.

When the groundhog appeared, peeking its little head out, I took aim, caressed the trigger with my finger, slowed my breathing, and waited. When the groundhog came fully into view, I was just about to shoot when Shazam—who I thought was inside the house—jumped off the deck and grabbed the groundhog by its neck. Shazam shook the thing so hard it kept slapping against the sides of his face. By the time I got downstairs Shazam was poking the dead groundhog like it was a broken toy. When it didn’t get back up, Shazam, our sweet, adolescent pup/natural-born killer, gave me a delicate lick on the shin and trotted back inside. We never had groundhog trouble after that; or, not for long anyway. Shazam was so proficient that our neighbor Vicki made him a medallion for his collar that notched his kills.

When we adopted Shazam he was named Red, which made some sense as his head was reddish brown with a white stripe running down his nose. And he was supposedly from Louisiana. I cannot remember why we decided to name him Larry at first, but that lasted only a day or so before Lee Anne came up with Shazam, which was the word Joe Brill said at our commitment ceremony to formalize our union. Shazam had many aliases: Shazamalama Ding Dong, Love Muffin, Lama, Smushy Face, Dog Breath, and Nature Boy among them.

The moniker Nature Boy came about because of Shazam’s penchant for standing stock still with his head thrust in a bush or hedgerow, as if in a reverie. This may or may not have had something to do with the time he found a sandwich in the bushes outside the Catholic church down the street. We walked past those bushes every day on our way to the park. One afternoon, Shazam poked his head into the hedge and came out with an entire submarine sandwich, still wrapped in paper. Normally, I tried to keep our sensitive-stomached dog from eating ground scores, but the situation was so delightfully strange that I stood there and watched him eat the whole thing, paper and all. I’ll never understand why someone stashed a hero in that hedge, but Shazam inspected that bush closely every day thereafter.

Shazam was an alpha (runs in the family) and did not back down from pecking-order challenges. He never met a canine he didn’t want to make a beta, regardless of its size. As Adie, the owner of Rudy, a goofy beta, said of Shazam: “Macho was part of his charm.” Or, as Steven put it in a letter to Shazam: “You maintained territorial reign without having to invoke aggressive pronouncements. OK, there was that one gopher…oh, and UPS, USPS, and Fed Ex…but nonetheless, you weren’t a brute.”

Shazam was a cuddler and a lover. After a bracing walk on a winter’s morning we would often take to the couch and I would read while Shazam crawled on top of me and burrowed his cold, wet nose in my armpit before falling asleep. Sometimes he would stick his head in my crotch and hold it there and let me scratch the back of his neck. That was his happy place.

Shazam was a dog’s dog. He loved to swim, hike (he bagged 22 of the 35 Catskill peaks above 3,500 feet) catch Frisbees, destroy plush toys, chase deer, eat garbage, roughhouse with other canines, roll in dead things, menace the mailman, and sleep it all off on the couch.

One of my favorite memories of Shazam is the time we ran away from the dog warden. The city had decided to crack down on people walking their dogs off leash at the park. The dog warden had been driving around the park in his little white van handing out tickets to folks for their dogs being off-leash. A few people I knew had been ticketed, and the fine, with court fees, was close to $100.

One fine morning, Shazam and I were walking in the park when I saw the warden’s white van coming over the hill. And he saw us. Unleashed as always. I turned to Shazam and said, “We’re gonna make a run for it, buddy.” As the van bore down on us, Shazam and I took off. We jumped a low stone wall and ran across the grass and through the trees and across the bridge to the train tracks along the river where the city property ended. The dog warden had no jurisdiction here. But we didn’t stop and gloat or jeer at the dog warden in his little van. We kept going. We ran all the way home, two creatures simply delighted to be alive, to be running through the early-morning streets, to have found such a fine companion. Such a damn fine companion.