August 26, 2011
Last Updated: 08/07/2013 4:28 pm
comment
Chronogram received a gratifying shout-out in the Metropolitan section of the New York Times on August 5. In an article chronicling the “Brooklynization of the Hudson Valley,” we were referred to as “green, hip, and upscale” in a sentence stringing together Dia:Beacon, the Culinary Institute of America, the area’s colleges, and the Omega Institute as examples of a shared urban arriviste sensibility. Peter Applebome, author of the piece—titled “Williamsburg on the Hudson” in print and “Hipsters on the Hudson” online—describes the Brooklynization process as “the steady hipness creep with its locavore cuisine, its Williamsburgian bars, its Gyrotonic exercise, feng shui consultants and deep clay art therapy and, most of all, its recent arrivals from New York City.”

We’re grateful to the Times, and Peter Applebome (whom both the Jason Stern and I spoke to) for the kind words. It’s flattering to be grouped with the institutions we admire most, and to be singled out as a publication of note.

As pleased as I am, the piece makes me sad. I don’t question the premise of the article. As financial writer Daniel Gross posted on Twitter: “The NYT, tiring of  ‘Brooklyn is awesome’ articles, turns to ‘place to which Brooklynites flee is awesome’ articles.”  The Gray Lady has a weakness for the thrill of discovering trends in out-of-the-way locales like Brooklyn and the Hudson Valley.

The problem with the article isn’t the faulty logic behind schlepping out a dozen exurbanites who say things about the Hudson Valley like: “There’s nothing I can’t do living here, and it’s nice to fall asleep and wake to birds singing rather than trash trucks rolling down the street.” And Applebome, to his great credit, takes an offramp on the Hipster Highway to talk to some disaffected and economically challenged locals in Beacon and Hudson about the lack of jobs before setting back off again toward NoBro (or “North Brooklyn,” what one Beaconite now calls his town because of the influx of peeps from New York).

The point missed is simply this: the Omega Institute, locavorism, artist rebels, Chronogram, the CIA, even deep clay therapy, have all been resident in the Hudson Valley for many years. These things weren’t packed in an overnight bag with a Dave Eggers novel and a six-pack of Pabst Blue Ribbon by missionaries taking the train up the Hudson. Maybe they were brought in by someone from New York years ago. Who knows? We all have to be from somewhere. I myself am from that bastion of the un-hip, Queens.

And while we may lack many of the amenities of city life—odd public transport, Korean barbecue, professional basketball—the Hudson Valley is chock-full of creative, hardworking folks who can’t be defined so narrowly by the Times, nor can they be displaced by those who can. The beauty and ugliness of everything in the Hudson Valley cannot be summed up in 2,500-word piece in the Times. Thank goodness.

Many thanks to Dorothy Gambrell, who allowed us to reprint the “Tall Tales” cartoon from her entertaining Cat and Girl series (updated twice weekly at www.catandgirl.com). It’s worth noting that in the final panel, the word “Beacon” was originally “Portland.” Maybe Oregon will be the next frontier for all those Kings County pioneers. I can see the headline now: “Carroll Gardens on the Columbia.” 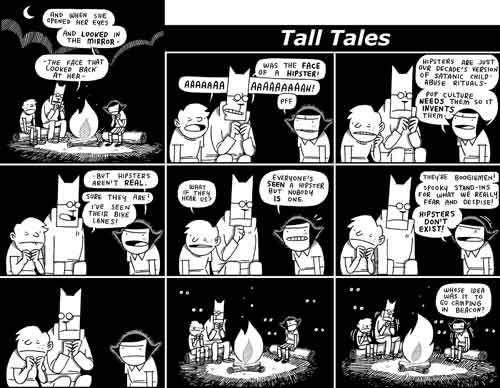 Daddy Long Legs to Stomp in Hudson and Beacon