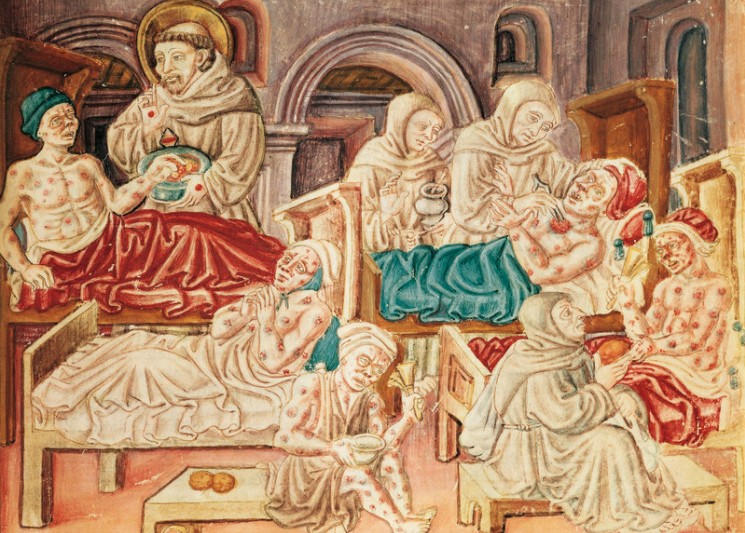 Between 1348 and 1359, the bubonic plague killed 30 percent of the population of Europe. By the end of the 14th century, the Black Death is estimated to have caused the deaths of 50 million people in Europe, Asia, and Africa. The practice of quarantine was developed as a way for coastal cities to protect themselves against the Black Death. One can imagine the city fathers of old Venice holed up in a castle and wringing their hands and saying in unison, "Something must be done!" and not having a clue as to just what that might be. (Not that I think less of them for it. They were doing the best they could. I often feel the same way when trying to make simple repairs around the house.)

In a medieval mirror of our times, quack cures were all the rage during the Black Death. Bubonic plague treatment fails included bloodletting, flagellation, rubbing onions on the buboes, drinking vinegar, injecting disinfectant, doses of ultraviolet light, and hydroxychloroquine. Actually, I'm not sure about the last three, but I believe they were suggested by a very, very smart, perhaps brilliant man. (What contemporary historian Jean Froissart wrote about doctors in the Middle Ages might just as easily apply to the current occupant of the White House, who has taken to offering medical advice of late: "Doctors need three qualifications: to be able to lie and not get caught, to pretend to be honest, and to cause death without guilt."

But, back to the Venetian city fathers—if all else fails, blame foreigners. Someone must have said, "Look fellas, it's clear that this plague thing was brought here by outsiders who eat bats and pangolins and stuff you buy at a wet market. Anybody know what a wet market even is? Giuseppe? Giancarlo? Dennis? Somebody make a note to find out. Last thing we need in Venice is a wet market. It's wet enough as it is. Irregardless. What's that Guiseppe? Irregardless is not a word? Who says? Webster? Webster Who? Never heard of him. Let's just move on with fewer distracting etymological discursions. And just to be clear Guiseppe, irregardless is not wrong, it's just a nonstandard variant. It might be clunky and deeply upsetting to all who care about "language," but don't tell me it's wrong. Those people can go stuff it in their pangolin and eat it. Anyway. Here's my big idea: We'll keep the ships with the anteater noshers at anchor for 40 days before we let them land. No one gets on, and no one gets off. That way, by the time they get off the boat they'll have exhausted their stores of non-kosher animals and we'll look like heroes for really doing something about this whole plague problem. Can I get an Amen fellas?"

The word quarantine comes from the Italian quaranta, meaning 40. But why 40 days? Why not 45, or 35? Why not a month or a fortnight for this medieval anti-contagion policy? My research indicates it has to do with connecting to a higher power, like running your e-commerce fulfillment through Amazon. If you were a 14th-century city father in charge of creating guidelines for public health, you didn't have a wealth of knowledge to draw on. Sure, there were the texts of the Greek physicians Galen and Hippocrates. Maybe you had access to some Islamic medical insight by way of the writings of Avicenna and Averroes. But you were pretty much making it up as you went along. And the best way to do that, and invest yourself with supernatural authority, was to root your logic in the Bible, the Wikipedia of premodern life. All the answers you would need could be found there.

The number 40 is imbued with massive symbolic and religious significance in the Judeo-Christian tradition, and pops up time and again in the Bible. That said, Howard Clarke, in The Gospel of Matthew and its Readers: A Historical Introduction to the First Gospel, notes that "At the time, 40 was less a specific number and more a general expression for any large figure." If that's the case, why bother with overheated symbolism at all? Just sayin'.

During the Noachian deluge, rain fell for 40 days and 40 nights. Moses and Elijah both fasted for 40 days and nights during their desert campaigns. (These were separate instances, not a coordinated hunger strike.) The Israelites wandered 40 years in the wilderness before reaching the Promised Land. (As a non-Jew, I have many, many questions about this: Were people not super pissed with Moses after about four hours of wandering? Speaking only for myself, I know how cranky I get when someone I'm traveling with doesn't know where they're going. How did they get deliveries of toilet paper if they didn't have a fixed address? Did they just write c/o General Delivery, the Judean Desert? Was there no cell service? I hate it when I'm out in some backwoods place—I'm looking at you, Delaware County—and my Waze app won't work.)

The New Testament also leans heavily on the numerical significance of 40 as well. Before his temptation, Jesus fasted for 40 days and 40 nights in the desert. (This leads one to believe that perhaps the J Man was having some kind of malnourishment-related hallucination rather than an actual parley with Lucifer. Just think of poor Tom Hanks in Cast Away. Jesus was probably wrestling a cactus by the end of it, thinking he was giving Satan a thrashing.) The period between Jesus's resurrection and his ascension into heaven was also 40 days. (I would be remiss if I didn't just mention the word "zombie" here.)

Back, again, to the Venetian city fathers. With the above religious boxes checked off, a 40-day period of containment was enacted as the norm. Now, here's the fun part: As luck would have it, the bubonic plague had a 37-day period from infection to death. European quarantines were highly successful! All the infected would be dead by the end of the quarantine. Sometimes just trying random shit works. Anybody wanna shoot some Lysol with me?