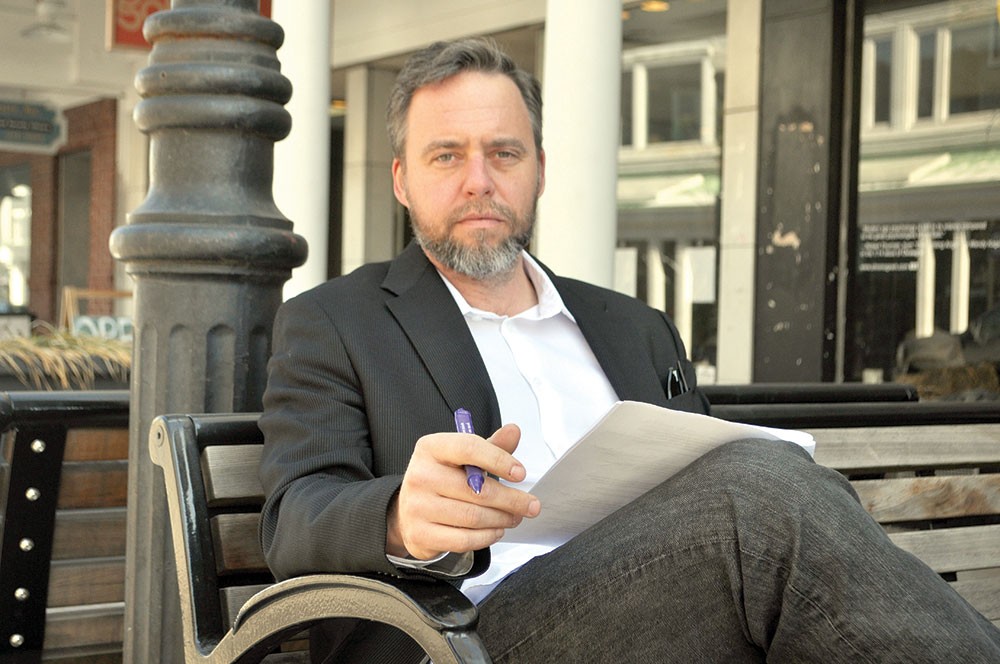 You're probably put off already by the title of this piece. Not another take on the genital-grabbing antics of Donald Trump! Fear not. Although the story I am about to tell takes places in the home borough of the Republican presidential candidate (Queens, the land of my own birth and rearing), I come neither to bury, nor praise, Trump1. I'll leave that to Larry Beinhart. His "Ode to Autumn" can be found here.

Regarding "locker room talk": I was reminded of an unfortunate incident from high school, triggered2 by a comment from our art critic Sparrow. (His appraisal of Lyle Owerko's "The Boombox Project" at Hudson Opera House appears here) Sparrow, knowing my regular exercise regimen, suggested that since I spend as much time as anyone in locker rooms, that I would be an expert on the proper etiquette of locker room talk.3 Now, while it's true that I do see the inside of a locker room a few times a week, namely the men's locker room at the YMCA in Kingston, most of the talk is centered on the health complaints of the geriatric men whose workout schedule I seem to be in sync with. One delightful exception4: Two men discussing when they like to have sex. They're in the next aisle over; I can't see them but I can hear them clearly. One says he likes it in the mornings. The other says he's more of an "afternoon delight" kind of guy. Typical locker room talk, right? As I pick up my bag and leave, I poke my head around the corner to see the two men getting dressed. They both had to be in their late seventies. There is hope for us all yet!

But on to my locker room story. It starts with a girl. Eileen Connelly. I scoped her in her hot pink denim miniskirt at the dance and got my friend Scott Dumbrowski to play wingman with her friend while I made time with Eileen. Things worked out well for me that night, and Eileen and I started dating. As did Scott and Eileen's friend, whose name is lost in the mists of time. No doubt she never thinks of me, as I have no part to play in her story, whereas she has a crucial Rosencrantz and Guildenstern-type role in mine.

Eileen and I dated for a couple of months, but then something went wrong—I think I behaved strangely in the straining and awkward way that 16-year-old boys have of trying too hard to impress; although maybe it was just Eileen didn't really like me—and she dumped me. Which was fine-ish, except that it seemed like I should make a play to get her back, if only for form's sake.

So I composed a note5, laying out my "feelings" for Eileen and expressing my fervent hope that she would reconsider her termination of our relationship, which had really only started. No frottage or anything. The note was full of all manner of ooey-gooey bits detailing how much I liked Eileen and how pretty I thought she was. The best effort of a budding literary stylist.

The way the note was to get to Eileen was through Scott's girlfriend, who was Eileen's best friend. Scott was to pass the note to his girlfriend after soccer practice, she would then pass it on to Eileen, and Eileen would read it and swoon. And then Eileen and I, and her hot pink denim miniskirt, would frottage away to the sounds of "I Melt with You" by Modern English. Well, that was how it was supposed to work. Except that Scott turned out to be an asshole.

Some things you should know about Scott Dumbrowski: He attended the same grammar school as me; he traveled to and from school with me every day, an hour each way on the bus; he was a ginger (I assume still is); he was on the soccer team with me; he was a close friend whom I trusted with things like notes containing declarations of love.

On the way to soccer practice on the fateful day I handed the note, Scott decided to read the contents of the note aloud to the rest of teammates, all 15 of them crammed into the minivan6. As I crawled over the seats trying to get at Scott, the team hooted and hollered derisively at my purple prose. By the time I reached Scott, he was done reading the note. The fight was brief, and Scott stomped me. I spent that practice, and the rest of the season, being mercilessly teased by my teammates, which I responded to by starting fights with them, an offense punishable by running laps around the park. My teammates soon began joking that I should have just joined the track team instead.

I didn't take the bus to school with Scott after that. I didn't go out for the soccer team again the next year either. I got my revenge on Scott, but that's another story. Needless to say, I'm not a big fan of locker room talk.

1 One theory I've been floating lately: The real legacy of the Trump campaign could be the death of white male privilege. Nearly every outrageous utterance Trump makes seems designed to pull back the curtain on how power works in America. He gloats about gaming the system to not pay taxes and boasts about sexual assault. In the open! The first rule of power is that power doesn't need to justify itself. If I didn't know better (and I might not), I'd be drawn to think that Trump is running a long-duration performance piece critiquing the structure of power in America. It's like he trying to ruin white male privilege for the rest of us! (White males, that is. Sorry ladies. And people of color. And the trans community. And the struggling everywhere.) Of course, as my colleague Peter Martin chillingly reminded me, white male privilege is evergreen. It will take more than the inflammatory flim-flam of one orangutan-haired billionaire to subvert the dominant paradigm. That's up to us. And it doesn't happen on Election Day—if you want to stare into the face of hegemony, just look at Hillary Clinton—but every day thereafter, when we demand real change from our government, not the lesser of two evils.

2 There are no warnings when it comes to the triggers of memory; the mind just fires away.

4 Though clearly I shouldn't be telling you this.

5 Yes, an actual paper artifact. Back in the pre-Internet days when we had to fight off wooly mammoths on our way to school, sending bits through intermediaries was a thing.

6 The minivan is standing in for the locker room. As we practiced at Kissena Park, some distance from our school, the rides to and from practice served as our ersatz locker room.