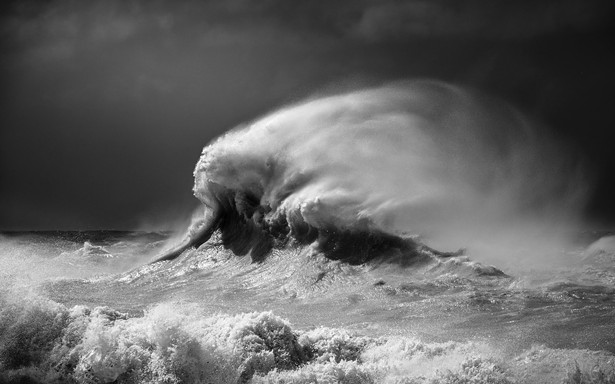 Pareidolia is the tendency to perceive a specific, often meaningful image in a random or ambiguous visual pattern—like seeing the face of Jesus in your toast. The term comes from the Greek words "para," meaning beside or beyond, and eidolon, meaning form or image. Once thought of as a symptom of psychosis, pareidolia is now recognized as a normal human tendency.

In his 1995 book The Demon-Haunted World, Carl Sagan theorized that pareidolia stems from an evolutionary need to quickly recognize faces. "As soon as the infant can see, it recognizes faces, and we now know that this skill is hardwired in our brains," Sagan writes. "Those infants who a million years ago were unable to recognize a face smiled back less, were less likely to win the hearts of their parents, and less likely to prosper." To Sagan, the fact that we see faces in rocks and clouds and bowls of spaghetti is just an anthropomorphizing tick we developed along our evolutionary path.

(Intriguingly, face-recognition software is also prone to pareidolia, with computers sometimes seeing faces where none exist. Instead of evolution, it is the algorithm and training data that they are programmed with that's the cause.)

Pareidolia is new to me (the term, not the experience; I once saw the face of Margaret Thatcher in a whorl of dog fur). I was turned on to it by our writer, Mike Cobb, who used it in reference to the work of photographer Rachael Talibart. She shoots seascapes that seem populated with all manner of creatures, both human and mythological, and she acknowledges a propensity for pareidolia. "I definitely have that tendency!" Tablibart told Cobb. "Pareidolia is a sign of our imagination at work and enriches our experience of the world." Sedna, Talibart's photograph of a wave, appears on the cover this month.

Related The Seductive Ocean Photography of Rachael Talibart: "Oceans & Odysseys" is Now On View at Sohn Fine Art in Lenox

Learning about pareidolia sent me down a delightful rabbit hole; one of the pleasures of editing this magazine is the never-ending journey of discovery it takes me on, even 28 years later. (This is my 329th issue as editor of Chronogram.) Allow me to share with you some of the other delightful tidbits I picked up this month.

The Sound of One Dog Eating

In contrast to the extra-sensory visual perception of pareidolia, the legacy of Pauline Oliveros (1932-2016) is in Deep Listening. The practice, developed by the composer and musician, explores the difference between the involuntary nature of hearing and the voluntary, selective nature of listening. A longtime resident of Kingston, the late experimental music innovator is the subject of a new documentary by Daniel Weintraub, Deep Listening: The Story of Pauline Oliveros, will be screened this month at the Rosendale Theater.

Related Deep Listening: The Story of Pauline Oliveros: The New Documentary on the Revered Musician Screens at the Rosendale Theater

I mused on Oliveros's Deep Listening practice—which I admittedly know precious little about—while walking Clancy in the park at dusk on the evening before the first frost. I decided to remove my earbuds and stop the relentless aural barrage of podcasts for a few moments. (How many podcasts do you listen to regularly? I must be up to nearly 50 in my regular rotation, and I can hardly keep up with them—the audio equivalent of cliche-but-true pile of unread copies of the New Yorker. According to DemandSage, as of June 2022, there were 2.4 million podcasts globally.)

The park was near-dark and empty, so it was easy to focus on the sounds around me. I heard three distinct layers: the low-toned background hum of traffic on Route 9W; the high-pitched chirping of nocturnal insects; and a middle tone, the susurrus of leaves rippling in the wind. The sounds bled together to make a song of sorts, but I could pick out the separate layers, like different instruments in the orchestra. And then, I detected a new layer: a deep, guttural rustling punctuated with frenetic outbursts of ripping paper. A quite familiar sound: Clancy rooting in discarded food wrappers. I put my earbuds back in.

Last month marked the opening of the David Rockefeller Creative Arts Center, located on the campus of the Pocantico Center of the Rockefeller Brothers Fund in Tarrytown. Carl Van Brunt took a trip down to Westchester to see the inaugural exhibition, "Inspired Encounters: Women Artist and the Legacies of Modern Art," and reports on the show in the Guide (page 68). The new arts center is located in a building designed by William Wells Bosworth in 1908 as an orangerie for John D. Rockefeller, of Standard Oil and richest-person-in-modern-history fame.

Related “Inspired Encounters: Women Artists and the Legacies of Modern Art”: Through March 19 at the David Rockefeller Creative Arts Center

Like "pareidolia," I was unfamiliar with the word "orangerie." Perhaps you are, too. Allow me to enlighten us both. An orangerie is a building dedicated to growing citrus fruit where the trees can be protected in winter. Not just a greenhouse, an orangerie was also a status symbol between the 17th and 19th centuries. (Seems that Rockefeller was late to the game.) The wealthy would often entertain in their orangeries in inclement weather, and the buildings, built in the classical style, would often contain fountains and grottos. Given the recent devastation of the Florida citrus crop by Hurricane Ian, it seems like a missed opportunity not to have kept a couple of fruit trees. Perhaps a grotto as well. And who doesn't aspire to grotto-level wealth?

Not So Random Harvest

In our June issue, Noah Eckstein reported on the initial planting of legal, adult-use marijuana in New York by a select group of hemp farmers licensed by the state to produce the first crop of weed since the passage of the MRTA. With a conditional adult-use cannabis cultivation license, cultivators were allowed to grow one acre of outdoor flowering canopy or 25,000 square feet in an indoor greenhouse. The cultivators Eckstein spoke to were wary but excited about growing their first marijuana crop.

Sow it Goes: The First Legal Weed Harvest in New York
We check in about the harvest with the first group of farmers allowed to grow legal, adult-use marijuana.
By Noah Eckstein
Legislation

As I write this, it's late October and all the farms who were part of the state's initial cadre of marijuana cultivators have harvested their plants. For this month's High Society report, Eckstein circles back around to the same farmers he profiled earlier this year. I don't want to ruin the suspense about whether the growing season was successful or not, but one grower told us they harvested over 30,000 plants. Which I learned is quite a lot of weed.

“Inspired Encounters: Women Artists and the Legacies of Modern Art”