Editor's Note: Gone to the Dogs

Davey McGahee,the protagonist in T. C. Boyle’s redemption farce “Miracle at Ballinspittle,” is a down-at-the-heels everyman. A New York City construction worker, McGahee and a friend decide, on a drunken whim, to visit a religious shrine in Ireland where a 15-year-old girl supposedly had witnessed the statue of the Virgin Mary move.

When McGahee arrives at the holy site, much to his surprise (and to those around him), the statue denounces him as a sinner, and reveals a shocking vision of all the food he’d ever eaten: “surrounded by forlornly mooing herds of cattle, sad-eyed pigs and sheep, funereal geese and clucking ducks, a spill of scuttling crabs and the claw-waving lobsters, even the odd dog or two he’d inadvertently wolfed down in Tijuana burritos and Cantonese stir-fry, truckloads of potatoes, onions, avocados, half-eaten burgers, and fork-scattered peas, the whole slithering wasteful cornucopia of his secret and public devouring.”

Boyle’s satire of human appetite is over-the-top to be sure, but poses a searing question to those of us who eat animals. As the narrator in “Ballinspittle” plaintively asks, “Who hasn’t laid to rest whole herds to feed his greedy gullet?” If I were to put myself in place of McGahee, how many cows would I face? How many truckloads of pigs? Which schools of fish and in what profusion? How many geese, ducks, and chickens would eye me balefully? The scene is a horror to contemplate.

I was reminded of Boyle’s story by a number of e-mails I received this month. A couple were from animal refuge/rescue operators, seeking publicity for their tireless advocacy for nonhumans. These are fine organizations—Catskill Animal Sanctuary in Saugerties, which recently rescued 41 chickens from a meth lab in Kansas; Pets Alive in Middletown, which has opened a food pantry for animal owners that can’t afford pet food—and I look forward to documenting their achievements in an upcoming issue.

Brian Shapiro, executive director of the Ulster County SPCA, had also called me, hoping we would help promote the SPCA’s annual benefit gala, the aptly named Fur Ball, on March 6 at the Kingston Holiday Inn. (For information: 845-331-5377x211.) By the time you read this, however, the Fur Ball is most likely either sold out or already past. If you want to spend a night out for a great cause, the SPCA is holding another fundraiser at Unison in New Paltz on April 23, “The Best of Friends,” an evening of stories, poems, and reminiscences about the relationship between people and dogs, presented by the Mohonk Mountain Stage Company and Snakeland Players.

I admire the heck out of Shapiro, whom we profiled in these pages two years ago shortly after he took over as head of the UCSPCA. A vegan, Shapiro is deeply committed to the cause of animal rights without being righteous or proselytizing. The man just wants to get animals adopted into good homes; if you want to talk about the best way to cook tofu, well he can do that, too.

Lee Anne and I adopted our dog, Shazam, at the UCSPCA 18 months ago. And while I’m ashamed to admit it, we have become the type of pet owners I always found exasperating until now. You know the type. People who leave the party early because they have to get home to their dog. People who talk incessantly about their pets like they were exceptionally bright children. People who accept compliments on behalf of their pets’ good looks, as if they shared DNA. People who worry if their dog is getting along with the house sitter while they’re on vacation.


We even cook for our dog. Now wait, before you judge, let me explain. After we adopted Shazam, the dog revealed himself to have a very sensitive stomach, not being able to tolerate dried dog food without a bout of diarrhea. Don’t get me wrong, the dog will eat anything—horse poop, six-week-old deer carcass, you name it—he’s just not able to process it effectively. The vet recommended a short regimen of chicken and rice. Not arroz con pollo mind you, just boiled chicken and white rice. That was over a year ago. We’ve tried to get him back on dog food, but his intestines don’t cooperate. (Yes, we’ve tried several brand of über-expensive organic dog food, as well as the raw meat diet.) So twice a week, we boil up a chicken and four cups of rice for Shazam. We top off each serving with a dollop of olive oil for his coat. No doubt Shazam eats better than a significant number of people on this planet.

Which brings me to another e-mail I received this month, from Evan Stormo, who took exception to the article we ran last month profiling Julie Powell, in which the memoirist/butcher posed next to a phalanx of dead pigs in the meat locker at Fleisher’s. Mr. Stormo poses the implicit question hanging over Boyle’s “Ballinspittle”: “Why are some animals used as companion animals and others consumption animals? What criterion makes an animal friend or food?” (The full text of the letter begins on page 14.)

It’s an ethical quandry for all pet-loving carnivores. 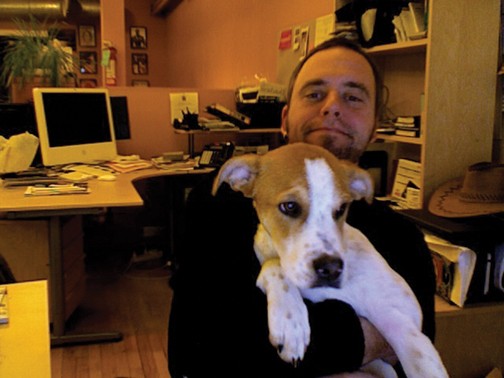