Editor's Note: Beauty and the Bureaucracy 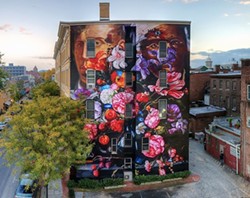 When Chronogram pulled up stakes in New Paltz and moved to Kingston in 2004, it was a practical decision: Commercial space was cheaper in Kingston. Wall Street was a sleepy thoroughfare, with more storefronts empty than not and a handful of restaurants and retail businesses catering to professionals clustered around the county courthouse and office building. IBM had moved out of the area in '95, taking with it the bedrock of good jobs that had served as a central pillar of the city's economic prosperity for decades.

It seemed like every time a new business would open, an existing one would close. I joked that the main leisure activity in Uptown was to watch the tumbleweeds as they rolled down Wall Street and bet on which one would reach the crumbling municipal parking structure first. A group of artists and health care professionals banded together to produce the first O+ Festival in 2010, thinking it would probably be a one-time only be-in. Each business opening, each cultural happening, felt like a community barn-raising. There was no coordinated plan and there was no coordinator. People tried stuff out: some of it felt immortal and true, and some if it fell flat and was forgotten. The city might not endorse your project, but it wouldn't stand in your way.

Fast-forward 15 years. The first floor of our building at 314 Wall Street, vacant for many years, is now home to Outdated Cafe, lauded for its chic intersection of vegetarian cuisine, idiosyncratic design, and community spirit by the New York Times, Vogue, and Japanese travel magazines. Kingston's first boutique hotel, the Kinsley, is about to open. (There are others in the works.) A former factory is now a tony events space. Historic buildings have been repurposed as bookstore/bars and cocktail lounges. The Kingston Green Line is about to open, transforming a long-disused railbed into a path of dreams for parents with kids in strollers. Multimillionaires and billionaires are buying up commercial properties in a real-life game of Monopoly. And a $62 million mixed-use development is now slated to be built where that crumbling parking structure used to be.

So much for tumbleweeds. What happened?

As northward migration from New York City has increased, the region's cities and towns have changed substantially. Beacon went from a city with shuttered storefronts on Main Street to one with new construction visible above the tree line from the Newburgh-Beacon Bridge. Hudson's mayor told me last year that his city was "attempting to manage its success" with regard to rising housing prices, housing shortages caused by the short-term rental market, and further development. Grassroots groups and ad hoc coalitions across the region are grappling with how to deal with rising housing prices, sometimes referred to by the politically loaded term gentrification.

In Kingston, one of the biggest changes to the visual landscape in the past decade has been the painting of more than 30 large-scale murals across the city. They're the work of artists operating under the aegis of the O+ Festival, a three-day art, music, and wellness celebration that takes place Columbus Day weekend. O+ is not just a series of concerts and art installations, but an attempt to empower a community to take control of its well-being. (O+ has also launched festivals like its Kingston flagship in other communities like North Adams, Massachusetts.) O+ brings artists of all stripes together with medical professionals: artists get free medical exams and wellness services; the public gets the art. Murals are year-round artistic legacy of the festival.

For nine years, the O+ has worked with artists and property owners to put up murals across the city. The murals vary greatly from one another, in style and content, the output of a range of artists both local and international in renown. Regardless of what you think of them—the murals have their critics—these large-scale paintings have put the city on the map as a place where culture gets done. There's no other place in the Hudson Valley that looks like Kingston.

One entity that O+ has not worked exceedingly closely with is the City of Kingston itself. As in the Wild West days of its birth, O+ continues to be the go-between connecting artists and property owners, with a rigorous internal vetting process, but no municipal oversight. Perhaps not for long. In late May, Kingston released a draft copy of its Art in Public policy, which would "establish guidelines and protocol for works of art that interact with the public way." If adopted into law, the proposal would set up a five-member Art in Public Panel—appointed by the mayor—which would review applications, but not on the basis of content (just size, placement, and materials). According to Mayor Steve Noble, the impetus for the public art legislation arose after a mural, defaced by graffiti, was painted over by the city in 2017. The mayor claims he did not know it was an O+ mural, nor did he know the location of the rest of the public art in the city. At the same time, the city was setting up, for the first time, an Arts Commission and the hiring of a municipal arts administrator. So why not draft legislation that codified a municipal public art process and offer assistance to artists in the process through its fledgling arts bureaucracy?

Some however, see the public art legislation as a solution in search of a problem. Others hint darkly that a cabal of realtors and developers don't want any more "edgy" art that might interfere with a bull market in real estate. Still others say that O+ itself is part of the gentrification problem, "artwashing" the city and making it ripe for speculation and development.

At a recent public hearing on the matter, many in the community expressed their skepticism that any legislation was needed, and whether putting veto power over public art projects in the hands of a mayor-appointed committee might stifle creativity. It might. Or it might not. The devil will be in the details of the Art in Public Panel, and whether it seeks to accrue power over time, like most government committees. But one thing seems clear: The Wild West days are over in Kingston. Beauty and bureaucracy will likely have to coexist, however uneasily.

7 New O+ Murals to Watch Out For

O+ for Health and Wellness