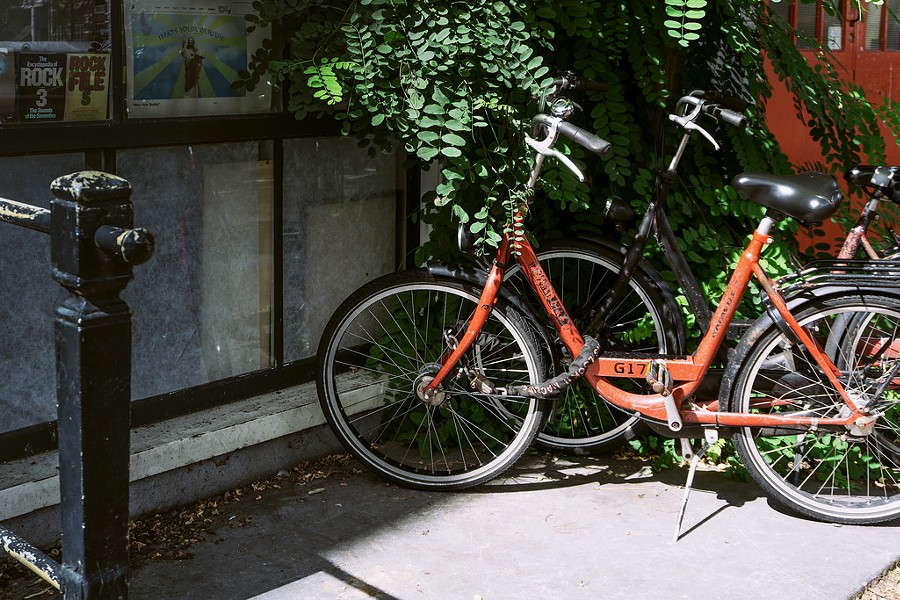 The trip was Karl's idea, I was just along for the ride.

Karl, an economist of my short acquaintance who worked at Bard College's Levy Institute and a fellow cycling enthusiast, was going to be in Amsterdam attending a conference around the same time I would be visiting family and friends in Ireland and the UK. What if we both tacked on a week at the end of our trips and pedaled from Amsterdam to Copenhagen? It was the fall of 1998, I was not quite 30, and a bicycle trip along the Northern European coast seemed like an adventure, but not too much of an adventure—there were some unknowns involved, as well as some exertion, by no physical danger. (It's not like we were riding from Sarajevo to Belgrade, if you recall world events of the period.)

The two main unknowns were as follows: We didn't have bicycles and we didn't know where we were going. To clarify: We knew that Copenhagen was about 500 miles to the northeast of Amsterdam, but we weren't sure of the best route for bicycle travel. We needed maps, which we purchased in a charming bookshop that specialized in travel literature, first-editions of 19th-century explorers' memoirs, and maps. (Remember, dear reader, that a mere 20 years ago, GPS-aided mapping apps were not on handheld devices.)

The bicycles were another matter entirely. Karl had assured me—based on his experience doing this elsewhere—that it would be easy to buy second-hand bicycles at a bike shop in Amsterdam, which we would then sell once we got to Copenhagen.

I had arrived in Amsterdam a few days before Karl and I were scheduled to rendezvous to hang out with my college buddy Johnny Love, who managed what was then mainland Europe's only improv theater, Boom Chicago. His social group consisted of a demimonde of artists, comedians, and grifters.

At a warehouse party the night I arrived in Amsterdam, after inquiring as to where I might buy a used bicycle, I was approached by a guy named Max who said he had exactly the item I needed. Max then took me to his apartment (I think we definitely smoked some weed), where there was a 10-speed touring bike taking up the almost the entirety of his child-sized living room. It had a lock, too, which was good, as I was going to need that in my travels. Trouble was, the lock was engaged between the wheel and the frame, and the Max didn't have the key. Max had stolen the bike just yesterday, a fact he offered cheerfully, as if the freshness of the theft was a major selling point. He'd let me take it off his hands for 40 guilders, all I'd need to do was go out in the morning and buy a hacksaw and cut through the lock. Max would let me do it in his apartment. And how perfect was it that I was leaving town, as Max's neighbor would never know of his involvement.

Despite Max's offense—he did invite me into his home and get me high, he reminded me—I did not buy the purloined Schwinn. Karl and I met up a few days later and it was as easy as Karl said to buy second-hand bikes. We rode off from Amsterdam's city center on a November afternoon as a light rain was falling. This was to be one of the lightest rains of our journey. It turns out that November is the rainy season in Northern Europe. It rains—a lot. The postcards in the tourist shops make jokes about it. Bad weather is a thing, like traffic in LA.

Nowhere is this more so than in the Dutch province of Friesland on the northwestern tip of the country jutting out into the North Sea. Karl and I had decided to take the coastal route, envisioning bucolic seaside touring past windmills and blonde barmaids. Friesland, however, had other ideas. It seems impossible that rain, which falls from above—the operative word here being falls, which implies vertical motion—could assault one in a purely horizontal manner, but I had never experienced Friesian rain. Rain so hard and so thick that Karl and I rode past the sign of the hostel we were supposed to stay at one afternoon. Just a few feet off the road, it was obscured by the sheer density of the material erupting out of an upside-down water volcano and crowding out the air itself.

Because of the aggressively inclement weather, Karl and I spent a lot of time in cafes and bar either waiting out downpours or drying out from downpours. We spent a lot of time talking, and we spoke a lot about Karl's work on the Universal Basic Income, which in 1998 seemed like a radical idea to my American ears, despite its partial adoption in some European countries. The central premise is as simple as it sounds: people receive a regular sum of money and services from the government, which is enough to live on. If they want to work to make more money, they are free to do so, but no one has to worry about their basic needs being met.

Karl made the point that we don't have a work ethic, but rather a money-making ethic. We all work because we need money, not because we love work. (I encourage you to write me if you disagree.) If we didn't have to work our weekly 40 hours (or more) trying to make ends meet, what unrealized human potential might be unleashed?

Karl has become one of the leading scholars and advocates for the Universal Basic Income over the last two decades. Our conversations on that long, wet ride led to me ask him to write an article for Chronogram. What Karl wrote then (From the Archive, page 19), which seemed so speculative to me, now seems weirdly prescient. At a time when digital behemoths like Google and Facebook make wealth not jobs, and the increasing automation of jobs—not only of manual labor but also the coming wave of robot lawyers and doctors—perhaps a work-free future isn't such a far-fetched idea after all. I mean, if I didn't have to work, I might make it back to Friesland for another bike trip with Karl—in April, the dry season.