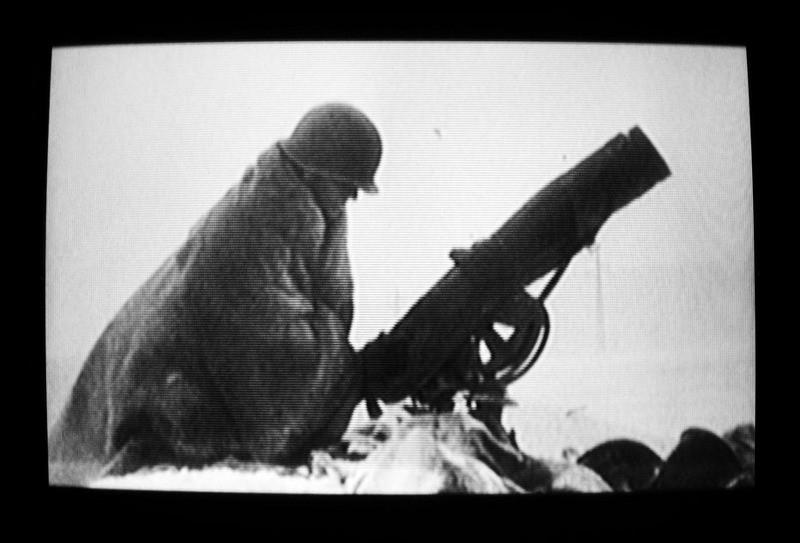 Though I was born 13 years after it ended, World War II was the war of my childhood. The Big War, the Good War—it was the war of all wars, the war that made every American feel righteous and brought prosperity to the country. It was the war of Eisenhower, president when I was born, and Kennedy, president when I started school. The Second World War defined every adult I knew. Everyone had a story about what they did, where they were, how they changed. And it was the war of everyone’s entertainment. I watched WWII played out constantly on television, in a show called “Combat!” with Vic Morrow as Sgt. Saunders, and in old movies like Flying Leathernecks and Hellcats of the Navy. As a kid, I figured all wars were fought in French villages, in fighter-bombers over Guadalcanal, or in submarines deep in enemy waters. Regardless of the service branch or theater, in every movie there was always a clown and always a naysayer in every military unit, and the naysayer was always killed, and sometimes the clown was too, in the more poignant pictures. And of course, at the end of every picture, we won.

As I got older, the other war of my childhood became more and more present. I was probably around 11 when I started paying attention to the evening news, where, as we all now know, the Vietnam War was fought in America’s living rooms. At first, it was just more battle footage on the tube—we had a black-and-white TV, so the newsreels easily blended in with the old movies. But little by little came a bleaker awareness. I was 12 when four student protesters were killed at Kent State by National Guardsmen; I remember a political cartoon of a soldier with a chart labeled Body Count, and four black slashes beside a single entry, “Kent State.” When I was 13, my older brother began talking about being drafted, worrying about his lottery number, and contemplating Canada. I began to listen more to what dissenters like Jane Fonda and John Lennon had to say about Vietnam. I had already figured out that the course of events there was being charted by men no honorable person could emulate: men with names like Westmoreland, Calley, and Nixon.

And in the end, of course, we lost that war, and more than 50,000 American servicemen and -women had died for—what? By the time I got out of high school, “soldier” was a dirty word, and the idea of service in the military was no more reasonable to me than flying to Mars. This was my dialectic of war, a childhood of anti-Hitler glory, and an adolescence of anti-Vietnam bitterness. And though my attitude toward the military has grown considerably more complex since, I am all too aware that just about everything I know about warfare comes, in one sense or another, from stories and pictures.

What got me thinking about this now is the impending appearance of Ken Burns’s new documentary, The War. Depending on whether you have cable or not, you are more or less aware that this behemoth meditation on World War II will be aired in September; since I still get my television from an antenna, I spend a lot of TV time watching PBS, and am all too aware that this is the network’s Big Event of the fall. I have decidedly mixed feelings about 14 hours of Ken Burns earnestness about anything these days, but I have seen clips of the new film and have to admit it looks compelling.

Then again, I am fascinated by anything that has to do with war, as only someone who has never been in one could be. I remember the stunned awe I felt for the first half-hour of Steven Spielberg’s Saving Private Ryan, in which he portrayed the ferocity of the D-Day landing on Omaha Beach. I expressed this admiration to my friend Tony Vaccaro, who actually fought in Europe in WWII, and he told me dryly that as bad as Spielberg made it look, the truth was many times worse. Tony, who went on to photograph for the best magazines of his day, has an amazing archive of pictures he took as an infantryman, and those pictures are another way I have come to internalize an experience I’ve never had. In a picture someone took of him, he stands in uniform draped with a camera and a carbine, staring glumly at the photographer. “Before the war, I was always happy, always smiling,” he told me. “After it was over, I didn’t smile for two years.”

We seem always to be at war, or recovering from war, or preparing for it. The warrior is never far from our consciousness. In every culture, he is a standard male archetype of strength, loyalty, and iron will. There is something fearsome about him, and something potentially malignant. This warrior ideal is not a part of our image of the World War II soldier, who is more often cast as a regular Joe with a job to do. Even John Wayne at his most gung-ho is more a soldier than a warrior—a figure driven by duty more than psychic calling. When the Vietnam fighter was cast as a warrior, he had gone over to some dark side, like the sadistic Robert Duvall helicopter commander in Apocalypse Now, or the rampaging Sylvester Stallone in the Rambo movies.
Since the 1980s, we have courted this dark warrior mentality with manic enthusiasm. You see it everywhere now, in business, in reality TV, in professional sports, and, of course, in the news out of Iraq. In a time of fear, hatred, and irrational carnage, an era so hungry for heroes that every deceased soldier, police officer, and firefighter gets conferred with the title, the warrior has become a potent anti-hero. In many ways we are our art, and if the images in films like Jarhead and Hotel Baghdad can be believed, our ideal warrior has become an agent of mayhem and brutality. One of the best ways to support our troops would be to get them out from under the burden of such a warped role.

I have far more respect for soldiering now than I did as an 18-year-old, but still wonder about the tragic compulsion that seems to draw men to it. Maybe there is some terrible yin-yang balance at work in the universe, in which Woman represents life-through-birth and Man death-through-war. Do we as a sex actualize some deep part of our collective soul through warfare? This is a dark question for a dark age. We can gaze upon the glories and terrors of war forever, but can its image ever help us understand its meaning?

View From The Top war Vietnam the documentary