The rolling hills of northeast Dutchess County, abutting the Connecticut border, weave together a picture-perfect patchwork of requisite red barns, sprawling old estates, and scores of handsome horse farms that pinpoint the region as an equestrian epicenter. Departing briefly from the rural setting is a trio of small enclaves—Millerton, Amenia, and Millbrook—each proposing satisfying pockets of culture, shopping, dining, and diversion, despite differing in character and approach.

The three communities are loosely threaded together on a stretch of Route 44, and dipping into any of them delivers diverse encounters with linger-worthy establishments—from teahouses and coffee shops to indie movie theaters and old bookstores—all designed to make life slow down...and for the moment to be savored. Boutiques abound in human-scale locales where mom-and-pop shops prevail. The quality of the culinary scene is first-rate, and farm-to-table is not a clichéd marketing ploy but simply the norm.

Each destination balances the evergreen with evolution, offering establishments that have long anchored the areas mixed in with new ventures that are ushering in fresh energy and transformation. On the fringes of town, well-kept parks, rambling private gardens, and a recreational rail trail (fitting, given that each settlement touts its own historical ties to railroads) promise plenty of opportunity to hike, bike, and simply be.

Commerce, culture, cuisine, and caffeine converge on Main Street—a service-oriented function that the village center has fulfilled, albeit in ever-changing forms, since the days when three railroads met here in the mid-19th century. While the trains have been gone since 1980, this small village, with less than a 1,000 residents, still packs a commercial punch that far outsizes its dimensions, thanks to its well-trafficked location. Set at the crossroads of tony sections of Connecticut, Massachusetts's culture-packed Berkshires, and eastern New York State, the ebb and flow of transient traffic at its Tri-State coordinates ensures that Millerton's walkable main drag continues to thrive and grow.

Caffeine cravings are indulged at a duo of locally favored, Manhattan-worthy (little wonder, since both outlets have sister operations in New York City) village mainstays. At java mecca Irving Farm Coffee House, fresh coffee comes locally roasted from the outfit's nearby 2015-debuted coffee roastery; this spring, look out for a revamped breakfast/lunch menu that will pair local ingredients with international flavors. Tea connoisseurs, meanwhile, congregate to sip on locally crafted artisanal teas at the family-run Harney & Sons—a selection of the company's 250 tea varieties can be sampled in the tea tasting room, while smartly packaged teas in tins and satchels line the gift shop walls; and a back tea lounge is open for lunch.

That jolt's put to good use while pounding the pavement for Millerton-style retail therapy. Gilmor Glass helped usher in the artistic/craftsmen movement in town when it opened its massive shop 20 years ago; fine glass-blown stemware and home accents fill the lofty gallery, while glass-blowing demos and workshops unfold in the adjacent factory. Older still are a duo of shops-that-time-forgot at Terni's (dating to 1919), which sells hunting and fishing gear, or Saperstein's, across the street, a 70-year-old clothier.

Main Street has firmly emerged as an antiquing destination in recent years. While the Millerton Antiques Center, a massive antiquing emporium with 37 dealers, has been going strong since 1990, neighboring antique store Hunter Bee's opened in 2008 bolstered the town's antiquing cachet. More followed suit, with the most recent newcomers joining ranks in 2015: Jennings & Rohn Montage, run by a husband-and-wife team who pair antiques with rotating art shows, and Christopher Todd Antiques & Interiors, which mixes antiques with contemporary accents, as well as interior design services. Hunter Bee co-owner Kent Hunt welcomes the additions, stating, "We think it's great because we now are a real destination for antiques." 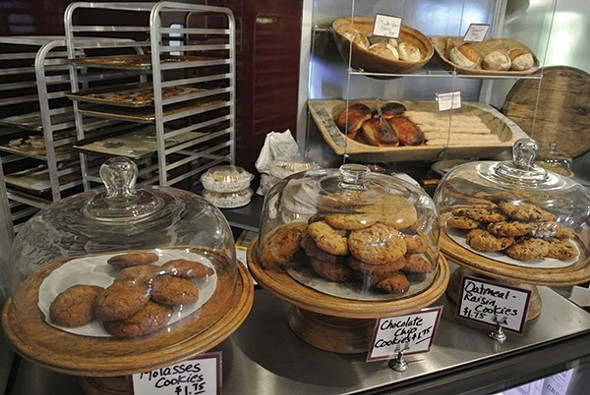 South Center Street, an offshoot of Main, has seen some spillover, with two new establishments opening in the last year. At the T-Shirt Farm, local personality Sal Osnato vends a selection of tees printed on-site, with a penchant for rock 'n' roll themes. A couple of buildings down, Hathaway Young opened in August as a bakery, specialty foods shop, and catering service, and serves breakfast and lunch. It joins longstanding Main Street restaurant favorites like tapas joint 52 Main, the retro Oakhurst Diner, and New American eatery Manna Dew Café.

Main's cultural hubs include the four-decade-old Oblong Books & Music, a well-stocked book and music shop, with a dedicated kids' space. The five-year-old Music Cellar offers all-ages music lessons (on a pay-what-you-can basis) and a recording studio. Cinephiles, meanwhile, flock to the three-screen The Moviehouse, which, since 1978, has screened first-run and indie films, documentaries, and cultural programming (like The Met Live in HD, and new for 2017, the TED Cinema Experience) in a 113-year-old clock tower-capped building.