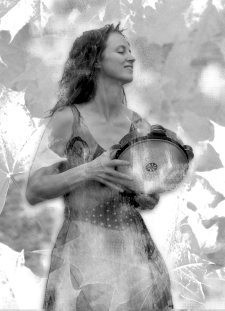 I recently lamented to my friend Kevin that my muse had been hibernating.  He explained that my well had probably run dry after my most recent creative spurt, and it was filling up again.  He assured me that the muse would soon return.

Two days later, a disc by frame drummer Layne Redmond appeared in my mailbox, Invoking The Muse.  I put it on and immediately felt a connection.  I dropped everything and began to dance.  Over the next few days, the dancing had become an obsession and part of a daily ritual involving a flowing white dress.  There was no question I needed to write about Redmond.  I took her book, When The Drummers Were Women, on a hike and sat under my favorite waterfall reading about the history of the frame drum in women's spirituality.  When I got home, I played my own frame drum a while.

That night I received an email from my friend, painter Melissa Harris.  "Do you have a frame drum?"  she wrote.  "If so, can I photograph you wearing a flowing dress, running through my back meadow with your drum?  Preferably in morning or late afternoon light.  I had a vision in my shamanic journey group the other night that I want to paint."

I rushed to contact Redmond.  I knew she'd love the story.

"Sharon, this is fantastic!"  she exclaims.  "You know, our consciousness is a continuum, and we're all just a minute fraction of that whole vast continuum of consciousness.  There's something really powerful happening."

Though Redmond isn't overly optimistic about the state of the world and doesn't believe in harmonic convergences and that sort of thing, she does believe in the power of the web of inspiration, our creative interconnectedness.  "The only way we'll survive these times is by becoming extremely creative," she says.  The cultural creative is being ignored, the people who have a spiritual view of where they want everything to go.  I think even the Democratic party is terrified to address us.  We have to step outside the box they're trying to keep our minds in."

Redmond has quite an impressive trail of creations behind her already; so many, in fact, that it would be impossible to mention them all here.  To scratch the surface, this one-time leader of the drumming troupe Mob of Angels was voted Percussionist of the Year two years in a row by Drum magazine; her CD, Trance Union, was voted best percussion recording; and her instructional video, Rhythmic Wisdom, was voted Percussion Video of the Year.  In 2000, that same publication listed her as one of the 53 Heavyweight Drummers Who Made A Difference in the '90s - she was the only woman on the list and one of the few listed who hasn't been in a commercial pop, rock, or jazz band.  While performing and recording on European and American labels for over a decade with master drummer/scholar Glen Velez (of Paul Winter Consort fame), she researched the history of the frame drum in religious and cultural rituals for the book When The Drummers Were Women, which recounts the lost history of female percussionists in Mesopotamia, Anatolia, Egypt, Greece, and Rome.  Redmond was the first woman to have a signature series of world percussion instruments with Remo, Inc., has lectured at numerous colleges and conventions, and has performed at festivals all over the world.  And all because of the small, hand-held frame drum.

As for her explosive creativity, she explains that drumming is one of the oldest techniques for accessing the deepest part of consciousness.  Her own creative well is very deep, so full all the time, in fact, that she couldn't possibly bring all her ideas to fruition.  Her latest CD is just one of those ideas that materialized, and it's nothing short of perfection.

Invoking The Muse consists of nine tracks, each one dedicated to a different muse, each one completely miraculous in technique, each one a flaming expression of Redmond's tribal heart.  This recording is exciting, gorgeous, weaving the rhythm of the frame drum with melodious strings, wind instruments, and female chant.  Lengthy liner notes explain Redmond's thoughts in detail, and she brings Hudson Valley favorites aboard on this gem of a journey: vocalists Ruth Cunningham and Laurel Massé, flutist Steve Gorn, and percussionist and producer Tommy Brunjes, plus violinist Vicki Richards of Florida.  Redmond plays several sizes of Remo frame drums on the recording, as well as Remo Tar, Bullroarer, Tar-Rine Tambourine, Mbira, Tibetan bowl, and India string bells.  The CD is starting to get some serious attention - it was the August featured album on John Dilberto's syndicated radio show, "Echoes," which plays on over 150 NPR stations.  Redmond has her fingers crossed that it'll be featured on the Grammy website.  She explains how the CD came into being.