Driving on the Oblong: Route 22 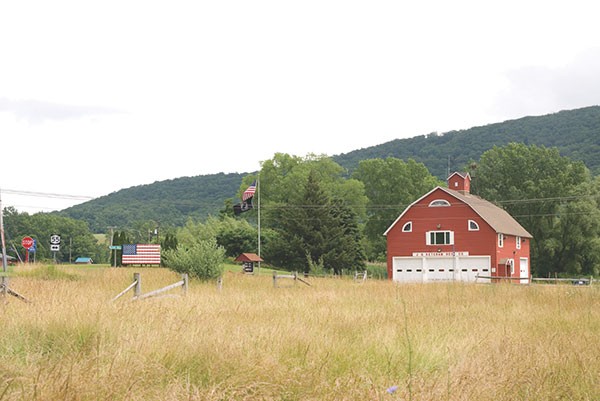 The Oblong is a special place. Two miles wide and sixty long, this stretch of territory along the New York/Connecticut border was being disputed by New York and Connecticut back when they were just colonies. But as European settlements took hold, the Oblong benefited from being settled largely by peace-loving Quakers.

Today, the region is still a largely gentle place: rolling, pretty farmlands and forests interrupted occasionally by towns that have grown more in personality than they have in size. Take a ride down the highway through the Berkshire foothills—as close as you can get to southern New England without leaving New York—and let the peaceable essence of the Oblong fill your soul. Bring your camera or your sketchbook or your journal—the gentle, rolling Oblong may stir your soul.

You can start in Dover Plains and drive the merged Rt. 22/Rt 55 down through Wingdale, a hamlet once dominated by a state psychiatric center that closed in the 1990s and is rumored to be haunted. More happily, in Wingdale, you can find the quiet beauty of the Slocum-Mostachetti Preserve. The preserve is located about a mile west of Rt. 22 on Pleasant Ridge Road, and the ridge lives up to its name; here you'll find good walks, abundant wildlife watching, and an entrée to one of eastern New York's lesser known blessings, the Great Swamp.

The Great Swamp is 6,000 acres of precious wetlands, and is looked after by two nonprofits, the Oblong Land Conservancy and the Friends of the Great Swamp. Slocum-Mostachetti is an upland suitable for hiking; other preserves are better viewed from a kayak or canoe. As you're traveling down Route 22, pause a moment and appreciate this ancient miracle that provides the Harlem Valley with drinking water and a riotous variety of wildlife with a place to call home.

Heading south on Route 22, you'll enter the pleasant Dutchess County town of Pawling. Pawling, like Wingdale, is a station stop on Metro-North's Harlem Valley line—a singular spot as the rail line intersects with the Appalachian Trail here. Take a ramble in the Pawling Nature Preserve, near the Pawling/Wingdale line off Quaker lake Road, and you may find yourself meeting folks who've been rambling all the way from Maine or Georgia.

The village of Pawling is a great place to stop for lunch, or pick up a picnic to take along. You'll find plenty of choices, from sit-down dining to pizza by the slice; you can rent a bike for your exploration.

You'll also find a rich history and a proud one. Pawling is where the Quakers established their home base around 1720, and abolished slavery in 1767, nearly a century before the Feds got around to it. They also opted out of the Revolutionary War, but the war came to town without a welcome mat: wounded soldiers were healed or buried on the aptly named Purgatory Hill, and George Washington spent two months here, headquartered at the preserved John Kane House. Also preserved is the Oblong Meeting House, emblematic of the simple worship tradition of the Quakers and commandeered for a time by the Revolutionary officers as a hospital.

Proceed south on Route 22 and you'll find yourself crossing the Putnam County line into Patterson, another historic corner of the Great Swamp/Oblong region. Take a self-guided walking tour of historic churches in the hamlet, or ponder the adventures of Sybil Ludington, a teenage girl sometimes called the "female Paul Revere," although her ride was actually longer than his, sneaking past Tories on a rainy night with the news that Danbury was in flames.