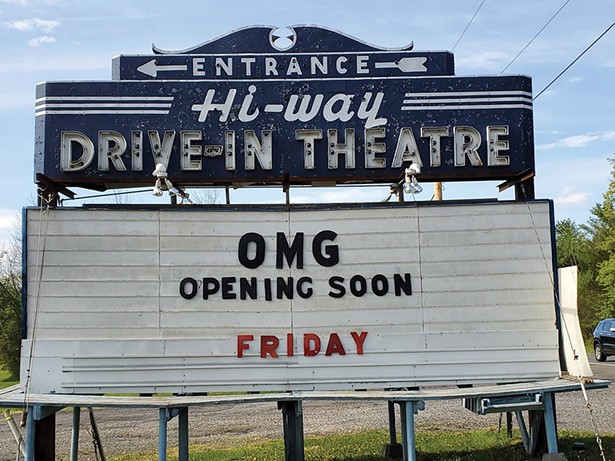 On May 15, drive-ins hit play, reopening for the first time since New York went on pause in March. Opening weekend, cabin-fevered New York residents turned out in droves. "We could've easily filled up twice over," says John Stefanopoulos, co-owner of Four Brothers Drive-In. The Amenia destination, which is limiting capacity for their single screen to 70 percent, or about 80 to 90 cars, has sold out every day they've been open. "We had thousands of people calling and emailing every day." Across the river in Orange County, tickets for Warwick Drive-In's Memorial Day weekend screenings sold out within an hour of going live.

Per New York State regulations, Hudson Valley drive-ins are requiring guests to have masks or a face covering for entry to the premises. Additional safety precautions include increased spacing between parked cars, enforced social distancing in food and bathroom lines, and extra sanitation measures. In order to minimize in-person interactions, most local drive-ins are also offering online ticketing.

Although the COVID-era drive-in experience looks different, with no lawn chairs or picnic blankets to speak of, the chance to escape the house for a purely recreational outing is a treat after months of sheltering in place. Stefanopoulos, who is a longtime believer in the drive-in revival, believes the COVID stir-craziness is only stoking a pre-existent flame.

"When mall society came in, they took drive-ins out, but Small Town America is coming back," he says. "You see that in Beacon, Hudson—places that have mom-and-pop stores. Drive-ins have a role to play on the entertainment side. There is a massive resurgence in the industry. Then you put the pandemic on top of that, and people don't even care what movie is playing. They just want to get out of the house."

With their BYO seating model, drive-ins are almost uncannily well-designed to provide safe entertainment in a pandemic. They offer what an indoor theater with a circulated air system cannot—a contained mini ecosystem for each guest or group. NBC reports that across the country "mom and pop drive-ins have seen spikes in revenue and a massive increase in demand in recent months."

While the current national estimate of around 330 drive-ins is far down from the peak of 4,000 in the 1950s, entrepreneurs are perking up at the resilience of the drive-in model and the resurgence of interest. The day we spoke in May, Stefanopoulos had already received nearly two dozen calls from around the country asking for advice on how to open a drive-in or interestested in franchising. "California, Carolinas, Chicago, Texas. I've had calls from everywhere," he says.

It's not just movies the drive-ins can offer. Amid the pandemic, these businesses are also renting their sites and particularly well-qualified infrastructure for socially distant events. Overlook and Hyde Park theaters are showing plein-air films Friday through Sunday, with their venue reserved for graduations the rest of the week. "We've had an astronomical demand in private bookings for parties and events," Stefanopoulos echoes. "We're in talks right now with a bunch of concert bookers and comedy clubs from the city that want to do live shows up here."

While New York slowly creeps back open, what lies over the economic horizon is unclear. But with cinemas low on the state's list of businesses scheduled to reopen, drive-ins could be the only moviegoing option for some time, hinting at a good season ahead. "It's hard to gauge from now," Stefanopoulos says. "But my prediction is that we're going to be really busy."