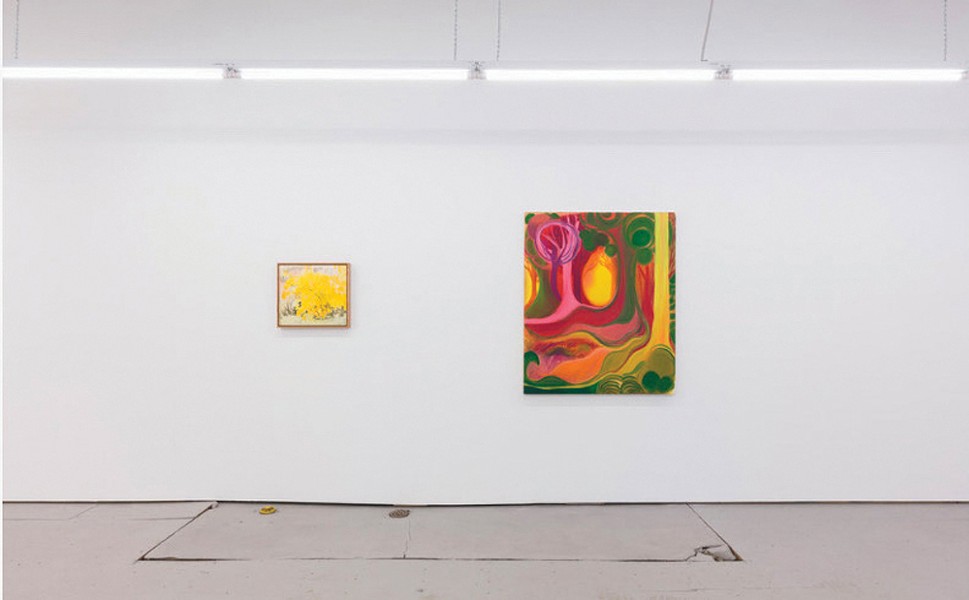 Lois Dodd is 93. Shara Hughes is 39. Their ages are mirror images, and their art is also, to some extent. Dodd came of age during the ascendancy of Abstract Expressionism and rebelled against its pure existential bareness. She painted snapshot-like images of daily life: pine trees glimpsed through the skylight of a barn, a sheet drying on a clothesline. Hughes creates fantasy landscapes in vivid, impossible colors. Hughes's paintings look like Dodd's canvases if they literally burst into flame.

There is a mother-daughter dynamic between them, on an artistic level. Maybe it's the music they listen to. One can imagine Dodd playing cool jazz on a stereo, and Hughes listening to techno on headphones. But both artists seem to point toward buried memories. Dodd specializes in moments so small we don't quite notice them. Hughes delineates dreams so disturbing we immediately suppress them. How did the two artists unite for an exhibition?

"We came up with the idea through speaking with Shara, who very much wanted to do an exhibition with Lois," explains Franklin Parrasch, cofounder of Parts & Labor Beacon. This artistic conversation between Dodd and Hughes began with a real conversation. Dodd visited Hughes in her studio in Brooklyn. (Both artists paint in oils.)

The two artists have clear affinities. Dodd's Forsythia, April (1976) is an explosive blast of yellow, with a few gestural gray branches. Dodd captures the way you look at the blaring yellow of a forsythia and for a moment see no shape—the color overwhelms your sense of form. Hughes's Clearing (2018), with its dazzling blue-violet sky, has a similar charge.

Nearly all the shows at Parts & Labor pair a young artist and an influential elder (or historical figure). The paintings of the two artists are hung alternately, so that they "communicate" across the room. The gallery itself is a collaboration, between two successful Manhattan gallerists, Parrasch and Nicelle Beauchene.

Parts & Labor opened in May 2019 in a building that had been an auto shop for vintage Porsches. "There's an indie band called Parts & Labor; I love that name," Parrasch admits. "And I figured, we're in an auto shop—let's go with it!" He also has a gallery in Los Angeles, Parrasch Heijnen.

The gallery reopened in July, as part of the cautious reanimation of the art world. "People are buying art all over," Parrasch remarks. "The gallery in LA sold out two shows in a row, and it's quite busy in New York." Clearly a certain number of the quarantined feel that if they have to stare at a wall all day, they might as well put something lovely on it.

The gallery is only open Saturday and Sunday. Parrasch suggests making reservations, but if the gallery is empty one can walk inside. (No more than four people are allowed in at a time.)