Down to the Bone: Elizabeth Lesser Finds Lessons Within 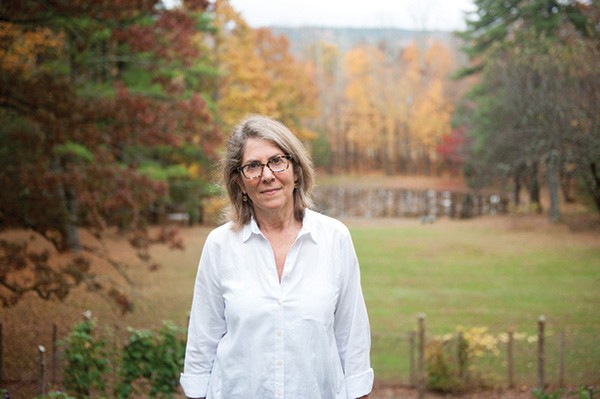 Elizabeth Lesser looks right at home in front of an overflow crowd at Woodstock's Kleinert/James Center for the Arts. The best-selling author and Omega Institute co-founder has just returned from a West Coast book tour for her stunning new memoir Marrow: A Love Story (Harper Wave, 2016), and there's a special joy in sharing her work with her neighbors.

Lesser has had the same Woodstock address for more than 30 years. Her son's family lives next door, and she takes daily delight in her grandchildren. But like so many of her peers, she took the long and winding road home.

Her childhood began in the Long Island suburbs. Her father was a "Mad Men"-era ad exec with a yen for the north woods; her mother an English teacher with activist leanings. "Whereas most adults were trying to be Ward and June Cleaver, my father and mother were aiming for Henry David Thoreau and Rosa Parks," Lesser writes. When they summarily uprooted their four daughters and moved to Vermont, the "back to the land" lifestyle failed to erase certain urban obsessions; the New Yorker remained "my parents' holy text."

The second of four sisters, Liz Lesser was typecast by family lore as the smart, bossy one. Maggie, she writes, was "the 'good' one—the well-behaved girl, the one my mother could depend on. And our shy littlest sister was Daddy's favorite, overrun by her big sisters, forever locked into being the baby." Both born in August, they were made to share birthday cakes. Maggie blew out the candles; Liz scowled.

And rebelled. From an early age, she challenged her family's hierarchy and her parents' zealous disdain for religion. "I was born with a spiritual ache in my bones," Lesser writes, and it's tempting to think it came right from the marrow.

In true hippie style, she left college to work as a midwife and childbirth educator, move to California, and follow her bliss. But her Sufi teacher Pir Vilyat Inayat Khan was "not your run-of-the-mill guru." Fluent in seven languages, he dreamed of creating a holistic learning center modeled on the ancient libraries of Alexandria. "Remember, this is a time when words like holistic, yoga, and meditation were still considered flaky," Lesser says. She and then-husband Stephan Rechtschaffen, a holistic MD, were living in a Berkshires commune when Khan tapped them to run the school he called Omega. Lesser was 22.

The young leaders rented spaces in New York and Vermont for four years before finding the former Camp Boiberik in 1981. A tumbledown Jewish kids' camp founded by the Sholom Aleichem Folk Institute, its property outside Rhinebeck included 140 acres of woods and meadows and a swimming lake. "Dutchess County was very rural back then, not at all the Hudson Valley Hamptons," Lesser notes. The name Omega came from the teachings of radical French priest and philosopher Pierre Teilhard de Chardin, whose term "Omega Point" describes the peak of consciousness and unity all life is trying to reach. (In an interesting footnote, de Chardin was exiled by the Vatican to Poughkeepsie and died in a Catholic monastery that's now the location of the Culinary Institute of America. "He's buried six miles down the road," Lesser says.)

Omega had found its home, and so had Lesser. For the next 25 years, she "lived and breathed it. I never did anything else." Her dedication helped build the Omega Institute into a world-renowned learning, spiritual, and arts community that now hosts 30,000 visitors a year.

Meanwhile, Lesser raised her three children and started writing books, first The Seeker's Guide: Making Your Life a Spiritual Adventure (Villard, 2000), then the New York Times bestseller Broken Open: How Difficult Times Help Us Grow (Villard, 2004). In it, she used her own divorce to explore how calamities can shake people awake. After its breakout success, she appeared on "Oprah" and national radio with "all my dirty laundry flapping in the breeze for everybody to see. I didn't mind that much, because we're all embarrassingly the same," she explains. "We're not really unique in our heartbreaks and longings. But I felt bad for the family members I kept dragging onto the page, so I said I'd never write a memoir again."

Instead, she started a novel. "I wanted to write a book about the vague notion we call authenticity. We all nod our heads with 'to thine own self be true,' but we don't really know what that means. Do we have an authentic core that's unique to each of us?" she asks, adding, "I tend to write about large perennial unanswerable questions." Her novel's leading character was "a woman politician running for office, trying for authenticity in the most inauthentic world." (Hillary Clinton, anyone?)