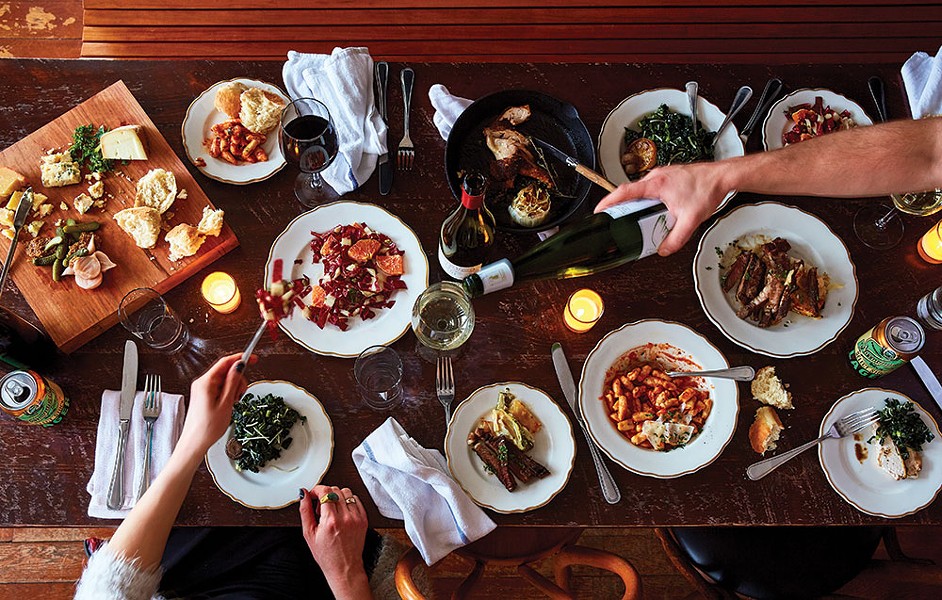 Geography and topography affect our experience of the world and the ways we interact with the environment and with each other. Urban terrain is smooth, fluid, dynamic, technologically and mechanically networked, and integrated at multiple levels. The city is a model of the synaptic connections of our minds projected onto the world, and, like it or not, we become enmeshed within its matrix. Capital is king; natural systems are confined, managed, and suppressed. Actual connections between people in real space and time are rare and fragile.

Communities nestled in the mountains emerge under very different conditions. Our mechanical and technological connectivity is blunted by the barriers of high peaks and climatic extremes; mountain communities retain some of the primal isolation imposed by the Earth's contours. We spend more time outside, whether for work or play, and nature's forces are experienced directly. We barter and trade.

Combine aspects of the two habitats, urban and mountain, and hybrid communities with distinct sensibilities emerge.

I've lived in Ulster County since I left New York City in 2004. My life in Delaware County began in 2009 when I first visited Plattekill Mountain, where I am now director of the Snowsports School. My first visit there was like stepping back into time; I grew up in Colorado, and Plattekill evoked childhood memories of places like Loveland Ski Area and Arapahoe Basin. Originally a logging operation, Plattekill's hemlocks were clear-cut in the 19th century for the tanning industry (a familiar story throughout the region). Skiing began in 1958, and Plattekill became known for the longest and steepest terrain in the Catskills at a time when ski operations were popping up all over the region (the Catskills have been home to as many as 24 ski areas). The first floor of the now three-story lodge was built in 1961, after the first lodge burned down. Plattekill is not a resort—it's a true ski area, nestled in bucolic Meeker Hollow, surrounded by farms. Telemark skiing is big here, and it's one of the few places that offers rentals and lessons in freeheel skiing. Owners Laszlo and Danielle Vajtay have kept this mom-and-pop operation open against all odds since 1993. Alan Cumming is a regular, and can often be found après-ski in the third-floor bar heated by a large woodstove. A hidden gem, Plattekill is the ski area you remember from your childhood, even if you never went there as a child.

I gave my very first Telemark lesson to Rob Howard, a photographer who lives in nearby Hobart, where my partner Kate and I have a repurposed construction trailer with a woodstove and composting outhouse on five acres with a spring and spectacular views, all for less than the cost of a semester at the college I attended.

Rob introduced me to Table on Ten in Bloomville in the summer of 2012. The intimate restaurant in a restored 1860s Italianate house is known for artisanal, wood-fired pizzas topped with ingredients sourced locally and seasonally. Dutch-born owner Inez Valk, a former model, sums up the restaurant using pizza as a metaphor: "It serves as the perfect platform for whatever is at hand, foraged, found, brought to us. Drawing a circle, gathering, finding ways to make it all come together, serving it up (often to the people who provided it); a little sourdough circle, emblematic of the overall narrative." Table has been featured in stories in Conde Nast Traveller, the New York Times, and Bon Appetit, but you still feel like you've stumbled onto a best-kept-secret each time you visit. Of particular note are the mushroom pizzas, with shiitakes, creminis, mozzarella, garlic, sage, and parmesan; and the marinated fennel, preserved meyer lemon, feta, and parsley pizza.

Understatement and simplicity, where farm-fresh ingredients are foregrounded and flavors are complex (often enhanced by processes of curing and fermentation), but preparation is uncomplicated, are characteristics also shared by Brushland in Bovina. When owners Sara Mae Elbert and Sohail Zandi met in the summer of 2012 in New York City, they were both questioning the sustainability of their lives there. As Elbert tells it, "it's an oft-heard story that begins and ends with two kids caught up in the service industry, hoping for something more than late nights closing down other people's restaurants, wondering if spending just as much on rent as you make every month is sustainable (it's not) and assuming that making a big change—shaking up what you know as 'the good life'—is impossible." Shortly after meeting, Zandi left the city to work on a farm, milking a Dutch Belted herd and making washed-rind cheese. A few weeks in—lungs full of fresh air, the simple act of shopping farmers markets and making dinner at home every night—it was clear to both that there was no going back.