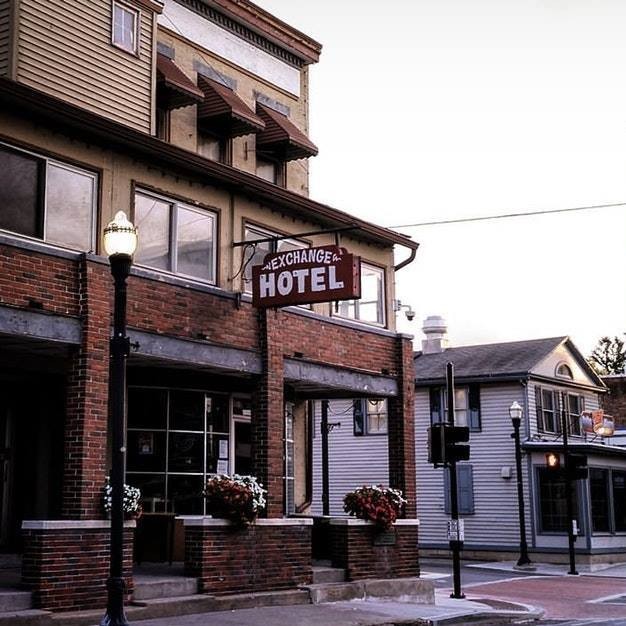 The phrase “great dive bar” might have been an oxymoron in decades past, but today hometown bars wear the moniker like a badge. While some newer establishments are trying to create this authentic hole-in-the-wall, been-there-forever vibe, readers instead chose the nearly-a-century-old Saugerties bar the Exchange Hotel as their top pick in dives.

“The Exchange is a local legend,” says Nicole Buono, daughter of co-owners Donna and Anthony Buono. “It’s one of the oldest businesses in the area and has been a staple business within the Saugerties community for years—with hopefully many more to come.”

Built in the 1820s, the Exchange was formerly a hotel with a restaurant and bar, named aptly so because it was a place where horses could be exchanged during long travel; the horse stables were located behind the building, where the dining area currently stands. It was purchased in 1929 by the Buono family and has remained in their hands for the past 91 years. Today, the Exchange is a classic dive bar equipped with a pinball machine, pool table, and fully functioning pay phone.

“The Exchange has always been a family-run business, you can find either owner at the bar on any given day; they are the life, soul, and heart of the business” Buono says. “A lot of people say you haven’t experienced Saugerties unless you’ve been to Exchange. Parents will bring their kids in on their 21st birthday to enjoy their first alcoholic beverage, like a rite of passage. We have a lot of regulars, many who have become like a family; they always sit in the same seat and our bartenders know exactly what to pour when they walk in.” It has even been featured on the “The Tonight Show” during a sketch last year in which Saugerties native Jimmy Fallon and country artist Jason Aldean sang about visiting a hometown bar on Thanksgiving Eve.

Though the coronavirus pause put a dent in the Exchange’s day-to-day, they remained open for takeout, selling out of their popular pizza within hours for the first few weeks. Months later, they’ve kept rolling with the changes, evolving as needed, including patio dining during Phase 2 of reopening. “This is the longest amount of time in history the Exchange has ever been closed to the public, except during Prohibition—it’s rumored we were open during that time, but we cannot confirm nor deny,” Buono says. “The Ex is truly the oldest bar in town and we have tried to keep its character alive throughout the years. While many things in Saugerties have changed, the Exchange has remained the same.”