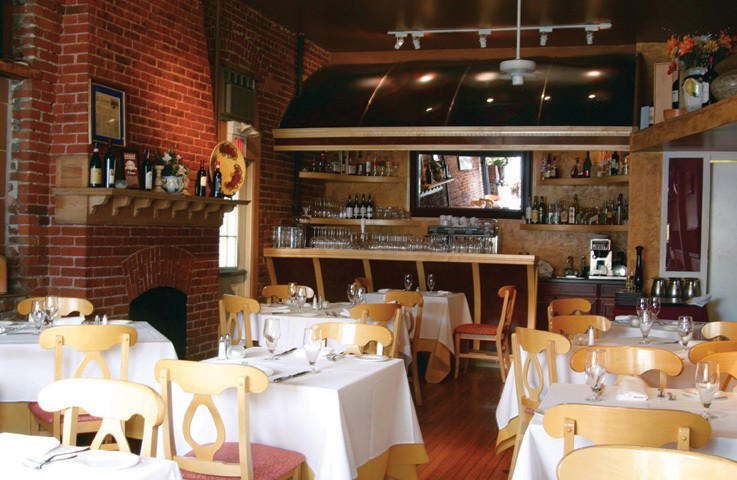 The Hudson Valley is known for its robust and forwarding thinking food scene. With The Culinary Institute of America (CIA) nestled in Hyde Park, the area is home to some of the best chefs in the country, and many of the world-class restaurants peppered throughout the region serve local milk, cheese, meat, vegetables, and wine. Spotlighting the area as a culinary destination, the 4th annual Hudson Valley Restaurant Week (HVRW) will run from March 15 through March 28 to feature the area as a culinary destination.
During the event, more than 125 participating restaurants in Westchester, Rockland, Orange, Putnam, Dutchess, Ulster, and Columbia counties will offer a specialty menu with three-course prix-fixe lunches at $20 and dinners at $28. (Prices do not include beverages, tax, and gratuity.) Restaurant goers will get to choose from a wide variety of cuisines including Nuevo Latino, Moroccan, Portuguese, Brazilian, Greek, French, Italian, Swiss, and the many slants on regional American fare that flourish locally.

Hudson Valley Restaurant Week organizer Janet Crawshaw says the two-week celebration has really taken off since it started in 2006 with 70 restaurants. “[Restaurant Week] showcases the Hudson Valley as a great culinary destination and it brings awareness worldwide, or certainly across the country, that there is something happening here.”

For the first time this year, Restaurant Week will include weekends. An estimated 150,000 people are expected to dine out, about 25,000 more than in 2009 when 87 restaurants participated. “It really gives restaurants an opportunity to introduce themselves to brand new customers and it also gives them a chance to say thank you to returning customers by giving them this great deal,” says Crawshaw, publisher of Valley Table magazine, which focuses on regional farms, food, and cuisine. According to surveys, at least half of the customers who dined out were trying the restaurants for the first time.

Crawshaw says she plans to go to as many restaurants as she can and hopes others will do the same. “I want to hear that the restaurants are buzzing and that the people are really enjoying themselves.”

Business Booster
The event revs up business in a lagging economy. Many restaurants report a 20 to 50 percent increase in sales. “Restaurants and the food industry in general are a big part of our local economy,” says Crawshaw. “And by jumpstarting it this way, everyone who is involved in that industry has the potential to do some additional business. [Restaurant Week] generates a lot of goodwill and a lot of good times.”

Part of the reason Restaurant Week is growing and dubbed the most successful dining promotion in the Hudson Valley is due in part to a massive marketing campaign, which features ads in the New York Times. The Metropolitan Transportation Authority (MTA) has signed on as a promotional partner, and their support is likely to trigger more train traffic. The MTA sent out HVRW flyers to its commutation ticket holders and advertised in Grand Central Terminal. Approximately 40 participating restaurants are in walking distance to a Metro-North station. “People do come from New Jersey, Connecticut, and Philadelphia for Restaurant Week,” says Crawshaw.

If your belly is full and you need a nap before heading home, about 20 inns, bed and breakfasts, and hotels are offering discounted rates during the two weeks in March, including the gothic-style Thayer Hotel on the grounds of West Point in Orange County.

“If people are coming out of the city, it would be great if they would take the drive and spend the weekend or spend an overnight, but it’s really easy if they want to hop on the train and when they get off they can literally walk to a great restaurant,” says Crawshaw.

The Gold Standard, a marketing communications and public relations firm headquartered in Katonah, has been on board to help spread the word of HVRW since the beginning.

“In the Hudson Valley, you can eat well and explore where the food comes from,” says Nancy Gold, president of The Gold Standard. Gold is an organic gardener and known to grow her own vegetables.

Chefs Weigh In
Local restaurants are gearing up for the event and have high hopes that it will fill seats during a notoriously slow month for the industry and tourism in general. “The good thing about HVRW is that it really kind of fills the void during the week, especially in this economy,” says Charles Fells, co-owner and chef of The Artist’s Palate, a contemporary American eatery located on Main Street in Poughkeepsie. The restaurant has participated in HVRW almost every year since it opened in 2007. Fells owns the restaurant with his wife Megan, a CIA grad. In December, Megan appeared on the Food Network’s “Chopped,” a cooking competition hosted by celebrity food critic Ted Allen. One of the restaurant’s signature dishes is Maine lobster mac and cheese, which costs $12 at lunch and is also served as an appetizer at dinner. This year, the Artist’s Palate will offer three to four choices in each category of appetizer, entrée, and dessert on its HVRW menu. (The restaurant is not participating in the event on Friday and Saturday nights.)