On a balmy Tuesday in New Paltz, developer Luis Martinez is talking excitedly about two passion projects he's working on.

One is La Estancia at the Ridgeview, an estimated $50 million project that Martinez's construction company, Lalo Group, has proposed, aimed at bringing residences, a boutique hotel, spa, restaurant, and retail space to a long-neglected lot in downtown New Paltz.

The other project is also in development and extremely important: His eldest daughter's quinceañera.

"It took us almost a year," Martinez says about planning his daughter's upcoming 15th birthday, a major milestone celebrated in Hispanic cultures, typically with a lavish party. This one has 314 invited guests, including this writer, who was handed an invitation after the interview.

After spending just a few minutes with Martinez, one might conclude he's just as passionate about bringing people to his big family party as he is about bringing them to a new home smack in the middle of New Paltz. He says his job as president of a construction company isn't a job at all, primarily because it quenches his desire to give back. He's now hoping his desire turns into steel and glass, a lasting mark on the community signed with his name.

Finding that name took a while. 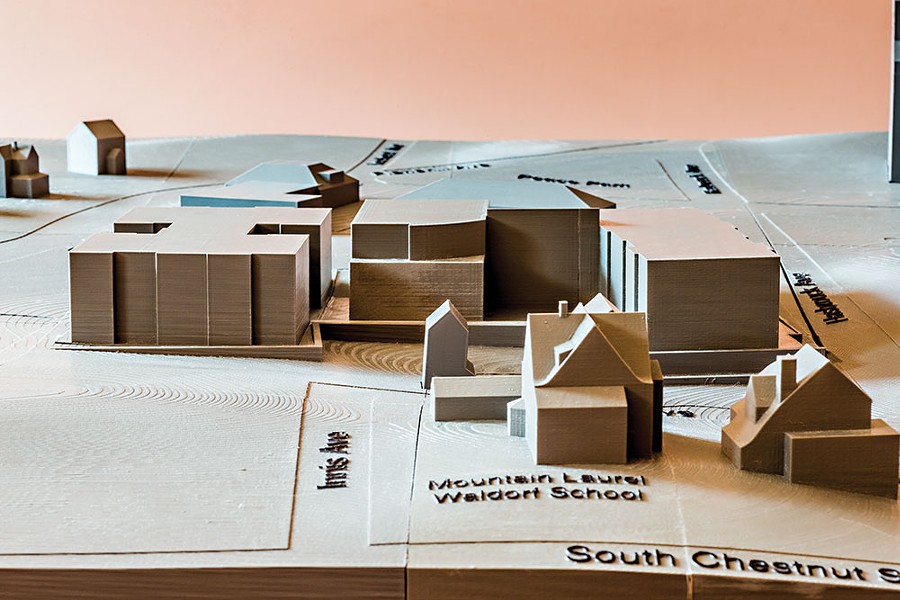 What's in a Name?

When Martinez was three and living in northern Mexico, his father was killed after a wedding. According to the story he was told, his father broke up a fight involving his brother. But as his father walked out of the party at the end of the night, someone fatally shot him.

Though his mother, Maria Luisa Reymundo, later met and married another man who would assume a parental role for Luis, growing up without a birth father in his Mexican town immediately made him and his younger brother Jesus outcasts to their peers. They'd tease him and scorn him— constant reminders of the loss of his father and his name.

Reymundo soon moved the family to America, first to Florida, then to New Jersey, and finally in 1992 to New Paltz. She and her new husband found jobs at Dressel Farms, selling strawberries and working as foreman, respectively. Martinez and brother Jesus, meanwhile, enrolled in New Paltz schools, where they had to quickly adjust to life in a quieter town near mountains and farms.

"When I came here I went into the classroom and I was the only [Hispanic] kid," says Martinez. "I didn't see a black kid or Spanish kid, or even one who was a mix of everything."

He loved growing up in New Paltz and spent years working at Dressel. During the summer, he'd start a shift at 6 am, picking strawberries for four hours as the sun rose over the Shawangunk Mountains. He'd help pick the apples during the late-summer harvest, then make cider. He never felt stressed out on the farm.

Jesus, meanwhile, was beginning his amateur boxing career, scoring three early knockouts at age 18. Jesus also longed to make an impact in others' lives, so he started befriending young people, some affiliated with gangs based in Newburgh. He'd help arrange dances for at-risk youth, then take kids to the gym to box, hoping to turn around their fortunes while giving them a new place to hang.

Early in the morning on May 9, 1999—Mother's Day—Jesus offered a friend a ride home after a party in Plattekill. After Jesus and his friend got out of the car, they ended up talking for a while on Renwick Street. Sometime after 4 am, a car drove by and gunshots rang. Jesus was fatally shot in the head.

To this day it's not known whether Jesus was targeted, but reports at the time detailed that Jesus had befriended a member of Newburgh's Mexican Mafia, La M.

Martinez had already lost his father. Now he lost his brother. He was uncertain about his future. He left for Seattle for a brief respite, which is where his construction career took off. Disillusioned with an opportunity in the city's restaurant industry, Martinez scrolled the classified ads and found a client in need of a construction team for a job.

Martinez knew four guys laid off from the restaurant industry, so he grabbed them with promises of pay, then grabbed a bunch of used tools and began his first job. Within 12 weeks he employed 14 workers and was landing jobs that paid up to $2,000 per week.

He had found his calling building homes and helping to give others the opportunities that he had in New Paltz, the opportunities that his brother wanted to give kids. He came back to New York in 2001, ready to make his impact. Instead of naming his business after his father's name, Martinez, he opted with Lalo—a diminutive form for his middle name, Eduardo—and started installing drywall in the New York City area under his own moniker. Lalo Dry Wall, later renamed the Lalo Group, has contributed in projects including Morris Heights Medical Center and Senior Housing in the Bronx, the Fulton Avenue Residential Complex in Brooklyn and City Point in Brooklyn, a more-than $7 million mixed-use complex.

At City Point, Lalo Group completed carpentry and drywall installation, according to Kieran Power, senior project executive at ZDG, LLC, the lead developer at the site. He praised Martinez's work and said he'd recommend him "for any complex project."

As his New York City portfolio grew, Martinez sought more work in Ulster County, wanting to build for people living and working in and around his hometown. In 2010 his team worked on Vineyard Commons, a 185-unit senior housing complex in Highland.

Working on others' developments was fine, but Martinez wanted to be the lead developer of something new for his hometown and home region. He bought a lot in Plattekill where he's proposing an apartment complex with 88 market-rate units. The idea there is to give middle-class workers in Newburgh the opportunity to live in garden apartments in nearby Plattekill, while boosting that town's tax revenue.

In August 2015, Lalo Group bought a lot in New Paltz known informally as "the Pit" for $1.25 million. Across from Village Hall, the site is an overgrown wooded lot that until the 1940s was home to the Tamney Hotel, and now it could be the future home of La Estancia at the Ridgeview.

The project was first proposed as a development with a 96-room hotel and 81-unit condominium complex standing seven stories above ground. Residents of the village pushed back against the height of the condominium structure and potential traffic issues.

Martinez has since altered the plan; it now features a 97-room hotel and separate residential complex with 70 units in three above-ground stories. A restaurant, day spa and 5,000 square feet of ground-floor retail space all hope to attract tourism. Martinez hopes to solve some of the traffic issue with a two-level underground parking lot capable of housing 400 vehicles.

There have been other issues to iron out, including the development's water source (Martinez says it'll be repurposed local storm water). That, with the added foot and vehicular traffic, plus the increase to New Paltz's downtown population, means La Estancia at the Ridgeview would dramatically alter the village. Martinez has continued to engage the public through the proposal process, attending public forums and luncheons to address concerns and answer questions.

"I appreciate that Luis is following this route" says New Paltz Village Mayor Tim Rogers about the public forums and feedback sessions over La Estancia. "If you're gonna try to pursue a big, ambitious project, this is how you have to do it."

Martinez says La Estancia will address the village's need for accommodations for tourists to the Shawangunk Mountains region and visiting family members of SUNY New Paltz students, plus provide incentive—through downtown apartments that provide walking access to shopping and dining—for graduates, young professionals and downsizing retirees to stay in New Paltz. In fact, La Estancia is Spanish for "The Stay."

"It's very difficult to accomplish anything, because so many people want things to remain the same. So this is very ambitious of him and generous of him," says Suzanne Holt, director of the Ulster County Office of Economic Development, and a New Paltz resident. "He's a very successful builder in New York City, and he doesn't have to be building here. He's doing this because he cares about this community.

A lot is riding on this project for Martinez. Besides the obvious shifts La Estancia at the Ridgeview would cause in New Paltz, this is an opportunity for a local guy who picked strawberries at the nearby farm to stamp his identity—the Lalo name—in his hometown. Martinez knows he can't get to groundbreaking without a public buy-in. (The development's website indicates a hope to build in 2018, but he's realistic about an even slower timetable.) He says he's more than prepared to see that through. "In life, we have to take risks," he says. "If I stop and don't pursue it, then I'll be a loser. It's gonna be a tough thing, but I want to bring something nice to the community."

He doesn't want to lose this, primarily because it can be a home for so many people in a place where he's always felt at home, even when his family took a hit, even when he wasn't sure of his identity. "They can live in this place," he says about his three children ages 10 to soon-to-be-15. He wants them to stay in New Paltz, if they so choose. "This is the future of me and my family, and I think it can be the future for all the families here in New Paltz too."

But before he gets there, he has to finish planning the quinceañera.