In early May, three urban designers—Anna Dietzch, Kaja Kuhl, and Liz McEnaney—launched the Design for Six Feet Initiative, an effort to reimagine public space in response to COVID-19. The trio soon gained a global following on Instagram. "We wanted to bring like-minded people together who were excited to view public space differently and connect in person in a safe way," says Kuhl. (Interestingly, the three designers have not met in person since the project began, conducting all of their planning for in-person community building virtually; McEnaney was stuck in Dubai from March 15 through August 15.)

The initiative's first project was aiding the city of Hudson in setting up its Shared Streets program, which reduced vehicular traffic on Warren Street and open up the thoroughfare for expanded retail, restaurant, and pedestrian use this summer. They next connected with the city of Newburgh, which wanted to create its own open streets plan, with the added wrinkle of designing it specifically for play. Instead of implementing their own agenda, the designers wanted to engage in a community dialog. "Our goal was to amplify other's voices and prepare the way for their ideas," says Kuhl.

Working with the Awesome Newburgh Foundation, the City of Newburgh, Columbia GSAPP Hudson Valley Initiative, Department of Small Interventions, the Fullerton Center, and the Newburgh Armory Unity Center, Design for Six Feet created a design competition that called for outdoor installation proposals in public space that respected the need for social distancing while also providing activities for children. Over 70 proposals were submitted, ranging in scale from individual play elements to systems that would transform entire blocks. Three winning design teams were chosen by a jury of Newburgh residents, but Kuhl hopes that all of the designs (viewable at designforsixfeet.org) will have a life outside the competition. "We'd like to see community partners utilize them as much as possible," say Kuhl. "We're hoping a lot more of these ideas can be adopted by others and answer the question: Can more public outdoor space adaptations for children happen in other communities as well."

Each winning design team received a stipend to develop their idea, and one project, Makerboards, submitted by DownupNY, a Vassar student-led design team, was about to be deployed in late September (to coincide with Newburgh Open Studios) in the field on the corner of Broadway and Liberty Street. DownupNY's Makerboards are a series of mobile windows that invite kids and families to co-create (while mitigating exposure)—from dry-erase art creations to musical compositions to a simple game of checkers.

The second project to be built will be Starr Whitehouse Landscape Architects and Planners' Imagination Pavilion, which will launch outside the Newburgh Free Library on October 17 in conjunction with an event celebrating the life of Harriet Tubman. Starr Whitehouse's pavilion is a kit of parts to assemble a friendly urban space for creativity. A story space by day, a shadow puppet theater by night. The pavilion is designed to be mobile and adaptable for multiple uses. 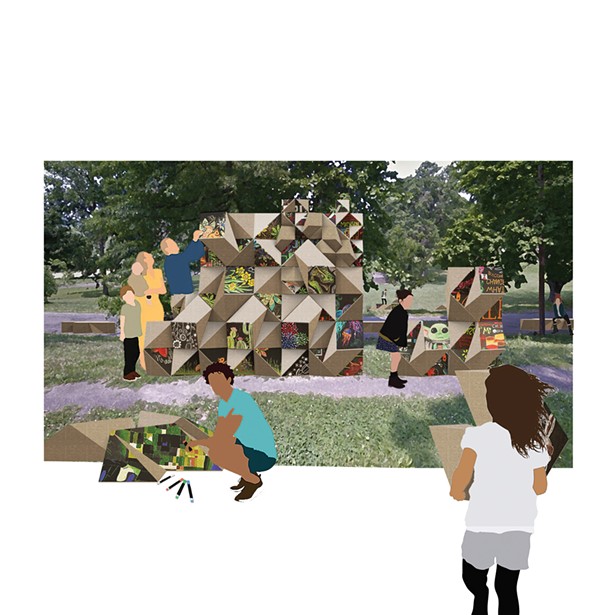 The competition's third winning entry is Anoushaé Eirabie and Yaxin Jiang's Play + Paint, which creates a collaborative street art experience through decorating folded elements that stack and combine into growing sculptures. The duo is in the process of finding a local fabricator for their idea, which, once built, will reside outside the Newburgh Armory Unity Center.

"The pandemic has exposed the bad that we've already had and made it more acute," says Design for Six Feet's Anna Dietzch. "Can we shape this crisis moment into a more holistic conversation with different cities and towns about public space?"