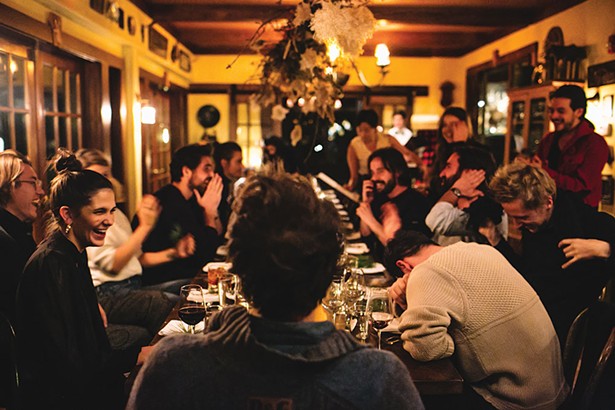 Atop the mountain above Tannersville sits Deer Mountain Inn, a restored lodge and boutique hotel with a fine dinner menu from an ambitious head chef.

Yarrow, agrimony, devil's paintbrush, buttercup—purple and yellow Catskill wildflowers line the grass path. We weave past the ruins of an old resort and through its once regal gardens on our way to a small pond. I'm wading through the meadow with Ryan Tate, and we're going to ogle the trout that arrived this morning via coolers on the back of a flatbed truck.

"Beaverkill Trout Hatchery stocked 75 fish here this morning. Full-sized trout. That means I need to get to work," Tate says, "and come up with a program, like, right now. Before the heron come." As we approach the pond's edge, he hands me a scone. "What's this?" I ask.

Tate is head chef at the Deer Mountain Inn, a restored lodge and boutique hotel on the mountain above Tannersville. He has long hair and two solid black bands tattooed around his right arm, above and below the elbow. He's wearing a black Deer Mountain Inn t-shirt that says "Culinary" across the back.

Tate's culinary philosophy involves making the most of the ingredients around him. While we're waiting for the new trout to reveal themselves, he tells me that he forages reindeer moss and red clover just across this field and ramps up the hill. We joke about his no-joke desire to forage frog legs next. This spring, he and his team tapped six maples in the woods behind the inn, harvesting six quarts of sap. Next year, they plan to tap 50. And the farm they're planting feet from the kitchen door is now on its second season of herbs, squash, rhubarb, fennel, nasturtiums, tomatoes, and two kinds of blueberries.

"Maybe we'll have a big party down here, and have guests catch the fish, and then plank them around a big fire." We are just about to give up on throwing makeshift fish food into the water. The soggy crumbs float around, neglected. Some shadowy bodies are visible below the surface, but it's clear that trout have no interest in scones.

I consider tossing what's left of my pastry into the wildflowers but it feels somehow rude, so the remainder ends up in my jacket pocket with my notebook. We make our way back through the meadow to County Road 25 and, across it, to the inn.

The Deer Mountain Inn—the DMI—began as the summer estate of the Colgate family. In its next life, it may have been owned by Jack "Legs" Diamond, the famous, Prohibition-era bootlegging gangster who's said to have taken a particular interest in Catskills real estate.


Now, on 160-some wooded acres laced with trails, the cedar-shingled main house offers six guest rooms. Each suite, with its cozy nooks and dark wood details, is named for a person of local significance—even if that significance has been more or less forgotten by history. This list includes the original founder and some prominent visitors to the Onteora Club, a utopian artists' retreat founded by Candace Wheeler and her brother Francis Thurber in 1887, known for hosting many a writer, painter, actor, and thinker (the Hudson River School painters, John Burroughs, Mark Twain) in its heyday. The private community lies barely a mile up the road.

Upstairs from the guest rooms is a cozy attic complete with red velvet billiards table, body-sized pillows, fireplace, flatscreen TV, and fine wine honor bar. Downstairs from the guest rooms, a sprawling dining room adjoins an intimate bar, mountain house art on the walls, and leather couches in the corners. The whole space is bookended by fireplaces and lit otherwise by a series of vintage lamps, antler-laden chandelier included. Wrapped around the front of the house, multiple levels of porches—offering no shortage of Adirondack chairs, log benches, and upholstered patio furniture—face the breathtaking mountain ridge on the horizon.

Thursday through Sunday, when afternoons of hiking and lawn games wrap, the in-house restaurant opens for business. That's where we find Tate again, running the show in the kitchen. 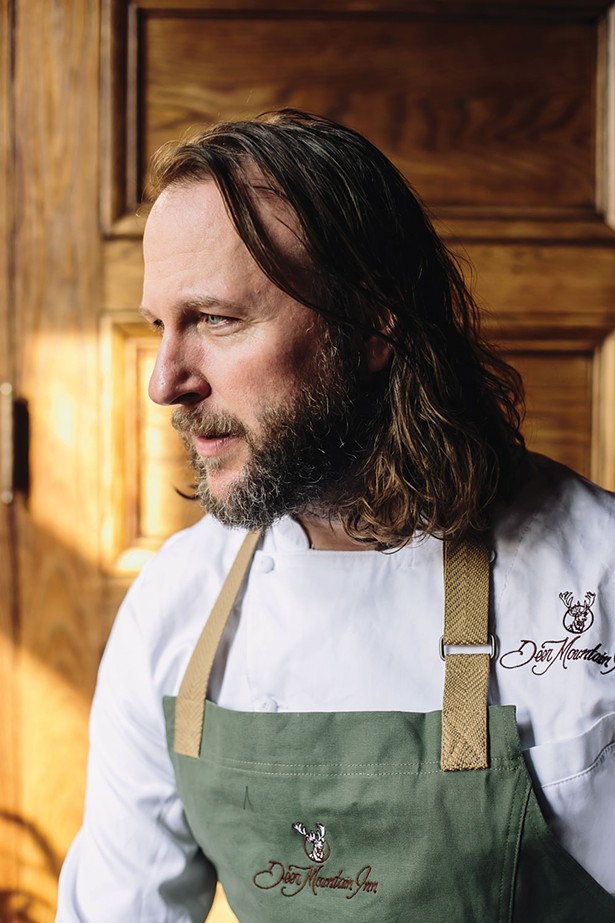 "I wholeheartedly want this to be one of the best restaurants in the world—not just in the the Catskills or New York," Chef Tate tells me.


When Tate helped open TriBeCa's Le Restaurant, his food—artful, adventurous, and surprising dishes offered exclusively as a five-course $100 tasting menu—earned him a star from Michelin (and several from other critics). Before that, he had been chef de cuisine at SoHo's Savoy. After Le Restaurant closed, the West Village's Blenheim welcomed him with open arms as executive chef. Blenheim got a nod from Michelin as well—inclusion in the Michelin Guide—the review stating: "When a restaurant sources ingredients from its own farm in the Catskills, it clearly takes its farm-to-table ethos to heart." But, as Tate's upstate move goes to show, when it comes to farm-to-table, you can always up the ante.