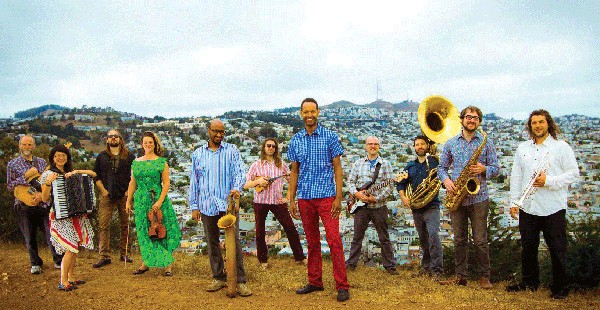 Western-dwelling lovers of exotic, exceptional music are delighted. But who among them could've predicted the international success of the Ethiopiques series? The compilation CDs, 29 so far and all released by French label Buda Music, assay the golden age of indigenous Ethiopian and Eritrean popular music. We're talking about the 1960s and '70s, when sweltering native rhythms, ululating Arabesque vocals, bold American soul- and European-brass-band-style horns, Memphis-stew funk grooves, and fuzzy psychedelic rock guitars slithered together in torrid, packed Addis Abeba nightclubs. It's this period and place that directly informs the music of the Boston-based Debo Band, which will perform at Bard College's Fisher Center on November 19.

"I guess the popularity of Ethiopiques kind of reached its peak in 2005, when [director] Jim Jarmusch used some tracks from the series in Broken Flowers," says Ethiopian-American saxophonist and band leader Danny Mekonnen, who was born in the Sudan in 1980 to refugees from dictator Mengistu Haile Mariam's violent, state-sponsored Red Terror campaign. "I think the music has mainly been popular in the West among music critics and underground listeners; it's not like it hit the mainstream. But one of the reasons I think people here have come to love it is because it's just the right mix of the familiar and the 'weird.'"

Yet for all its fervor for the West African sounds of 40 years ago, the 11-piece Debo Band, which started in 2006, is not bent on simply recreating the past. To the core Ethiopiques-era template of five-string and electric violins and droning accordion—instruments not usually identified with the style that make for some intoxicating new twists on a mode of music that's already plenty spicy to begin with. Add to this the trilling, mysterious, and unfathomably deep vocals of singer Bruck Tesfaye, and one ends up with an innovative, gloriously colorful aural hullabaloo for the head and the hips.

Debo Band debuted on disc in 2012 with a self-titled effort on the famously forward-thinking Seattle indie label Sub-Pop, best known as the home of alt-rock acts like Nirvana, the Shins, and Fleet Foxes. With sizzling movers like "Asha Gedawo," "And Lay," and "Habesha," Debo Band instantly won over the pundits at NPR, Pitchfork, Tinymixtapes, and other critical outlets. But the real test came in 2009, when the group toured Ethiopia for the first time. "We were never interested in being a cover band and didn't know if people there would like what we were doing with the music," Mekonnen says. "But the reaction was really positive. One of the Ethiopian musicians at a festival we played at told us, 'Your band has its own sound.' To me, that's the biggest compliment a band could hear."

Debo Band will perform in the LUMA Theater at Bard College's Fisher Center in Annandale-on-Hudson on November 19 at 8pm (a preconcert talk with the artists will take place at 7pm). Tickets are $15. (845) 758-7900; Fishercenter.bard.edu.