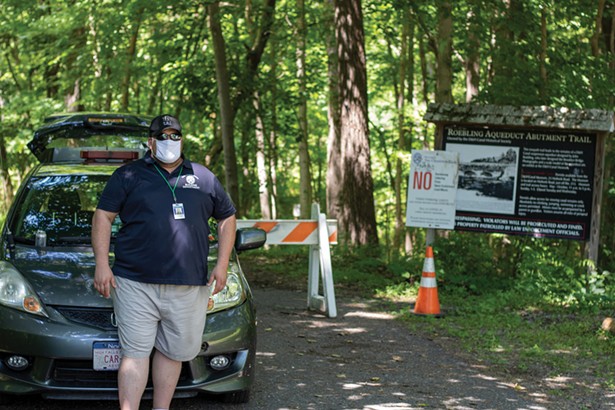 As New York City's balmy spring weather morphs into the static heat and humidity of summer, its residents look to escape.

The Hudson Valley and the Catskills have always been an escape valve for New York City, but the advent of social media has revealed more obscure locations to visitors. Some of these Instagram-famous spots are beautiful but dangerous, and out-of-towners can find themselves imperiled.

Nearly three dozen people have died on the Delaware River since 2014, many of whom were visiting the area to go tubing, including a New York City man on July 19 of this year. On the popular Breakneck Ridge outside Beacon, Jason M. Kindopp, a Brooklyn man, fell to his death in July 2018. Last month at Skydive the Ranch in Gardiner, William A. McCartin of New York City died after jumping out of an airplane and failing to deploy his parachute. (A week later, a Gardiner resident, David H. Richardson, died at the skydiving facility while trying to execute a "swoop landing.")

We've chosen two Hudson Valley spots city residents have flocked to in recent years to examine how these deaths happen—and how local authorities are struggling to make them safe.

High Falls is a series of waterfalls, deep pools and rough shallows on a stretch of the Rondout Creek about 10 miles southwest of Kingston in the hamlet of High Falls. Ulster County Sheriff's Detective Lieutenant Abram D. Markiewicz, a former member of the sheriff's dive team, says people need to be rescued from the Rondout in this area nearly every summer. "It was just understood that somebody was going to [need rescuing]—one or two people every summer," he says. "Maybe we went one year with nobody."

The Rondout here is owned by Central Hudson Gas & Electric, which operates a small hydroelectric plant at the head of the falls. The plant's federal license requires the creek to be accessible to boaters and hikers. However, entering the creek itself is trespassing. 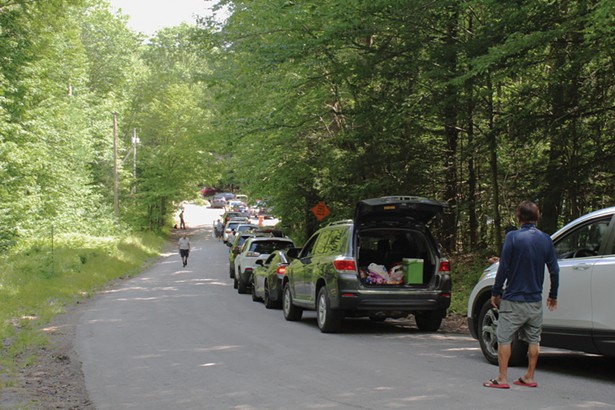 This did not stop scores of people from wading into the creek every weekend and jumping off the ruins of the Roebling Aqueduct Abutment, a former aqueduct of the D&H Canal that crossed the Rondout, designed and built by John A. Roebling, who is also responsible for the construction of the Brooklyn Bridge.

On June 23, 18-year-old Chris Bamba, a Kingston native, died after jumping from the abutment, according to an Ulster County Sheriff's Office spokesman. Bamba did not know how to swim. Seven people have drowned at High Falls since 2001, according to Marbletown Supervisor Rich Parete.

Though local residents have been going down to High Falls for generations—whether to legally walk along the creek or to trespass into the creek itself—Parete says things have changed in recent years. "People are taking pictures and putting them on social media, so we we've gotten a lot more interest from people coming from out of town," he says.

In the four weeks before Chris Bamba drowned, there were more than 200 Instagram posts geotagged with "High Falls, N.Y.," which can refer to either the hazardous stretch of the Rondout or the hamlet surrounding it. Forty-four of the posts were of High Falls itself, featuring twenty-somethings in bathing suits posing on boulders, swimming, drinking, and jumping off the abutment.

Carole and Richard Eppley, who run the non-profit High Falls Conservancy, say local youth have always swum at High Falls. "The kids who live here see it as a kind of legacy right to swim there," he says. The couple makes a distinction between local residents and people from elsewhere swimming at High Falls. "Because of [local youths'] life-long relationship with that part of the creek, they know where the danger spots are," Mr. Eppley says.

There's a whirlpool at one spot in High Falls, he says. In another area, the creek floor abruptly drops off. Lt. Det. Markiewicz says sheriff's deputies either educate the swimmers about the dangers of High Falls and shoo them away, or ticket everyone in the water for trespassing. "We've done it both ways over the years, and it just seems for a myriad of reasons—neither one seems to be any more or less effective than the other," he says. "It's certainly an issue that's larger than just going down and writing trespass tickets."

Residents of Marbletown also complain about the effect the crowds have on their community. Supervisor Parete said visitors from elsewhere "just take over the town" in the summer and speaks of visitors disrespecting the area. Out-of-towners would pack for the day, bringing coolers, floatation devices, speakers, grills, Sternos, and other supplies, Parete says, using the area as their bathroom, "crapping on paper plates and throwing them in the woods." Several local groups go to High Falls to clean up the mess. High Falls Conservancy volunteers recently hauled away about 20 trash bags of garbage from the area, according to Richard and Carole Eppley.

Chris Bamba's drowning seems to have made High Falls turn a corner. Shortly after his death, Central Hudson posted private security guards on the property tasked with making sure no one brought day-in-the-sun accoutrements down with them. A municipal employee is posted on town's land in the area. Both patrol High Falls for swimmers. Visits during the first two weeks of July saw High Falls deserted.

Central Hudson spokesman John Maserjian points to fencing erected in areas of High Falls prior to Bamba's death as evidence of the company managing visitation, as well as agreements with local law enforcement allowing them to automatically charge trespassers.

Supervisor Parete says Central Hudson had done an about-face in recent weeks, meeting with town officials and committing to hashing out a more permanent solution for next summer. "We're not interested in people coming in from out of the area [who] just go down there and spend the day and litter, take up our town resources with their parking — and they don't go into local stores or restaurants," he says. "They need to go find another spot...they're just really becoming a burden."

Carri Heberger, the manager of the High Falls Food Co-op, says High Falls was vastly different when she moved to the area 26 years ago.

"All the swimming holes had much less people," she says. "I hardly go anywhere anymore, as far as our little secret spots, because nothing's secret anymore, and they're all covered in trash and thousands of people. So they're kind of gone in a way."

Kaaterskill Falls, located between the Greene County hamlets of Palenville and Haines Falls, can be treacherous. There were six deaths in the area and 34 rescues from 2000-2016, according to the Department of Environmental Conservation (DEC). Many of the deaths were from slipping and falling off either tier of the 231-foot falls.

Kaaterskill Falls is different than High Falls since it is on state parkland and can be legally accessed. The DEC estimate that 100,000 people visited the Kaaterskill Falls area in 2019, more than twice the entire population of the surrounding county.

Town of Hunter Supervisor Daryl Legg says the area is only getting more congested. "It grows every year exponentially because of social media," he says. "It's all over the internet." Hunter residents are "very dismayed with the whole situation," Legg says. When asked if there was a division between local residents and people from elsewhere at Kaaterskill Falls itself, Legg replies there is not; he only knows of one local resident who goes there anymore.

A big issue is garbage. At the end of the day, trash is everywhere, Legg says. He blames the mess squarely on visitors from downstate."Unfortunately, they don't take all the stuff they brought with them back. It is state land, and the land is for everyone to use, but it's not for everyone to abuse," he adds.

Legg says he feels the visitors did not have a positive impact on the local economy, since they generally only came up for the day and pack their own food. Greene County Director of Tourism Heather Bagshaw did not respond to repeated requests for information about the impact of Kaaterskill Falls on the local economy.

Kaaterskill Falls has been given numerous safety improvements over the past few years. A 200-foot cable was installed as a handrail; a 200-foot stone staircase was constructed to connect two trails; an observation platform was erected to allow a safe way to view the upper falls from above; a new trail was blazed to allow easy access between the fall's different levels; and several trails were rehabilitated or improved, according to a July 10 statement from the DEC. "During this time when more New Yorkers are seeking an escape to nature, DEC is continuing to responsibly oversee the health and safety of visitors to Kaaterskill Falls and remain committed to working with local law enforcement, community stakeholders, and other partners to help address challenges created by increased use in the Kaaterskill Clove/Fawn's Leap area and other areas in the Catskills," according to a statement from the DEC.

The improvements have "absolutely" made the area safer, Supervisor Legg says, pointing in particular to the stone staircase. I ask Legg if Kaaterskill Falls was safe. "As safe as can be," he responds. "Anything you do has an inherent risk to it. You're hiking on loose shale, you're up near the third-highest waterfall in New York State."

"Anything can happen at any given time," he continues. "So yeah, I'd say they made it as safe as they possibly could without restricting people from going there."