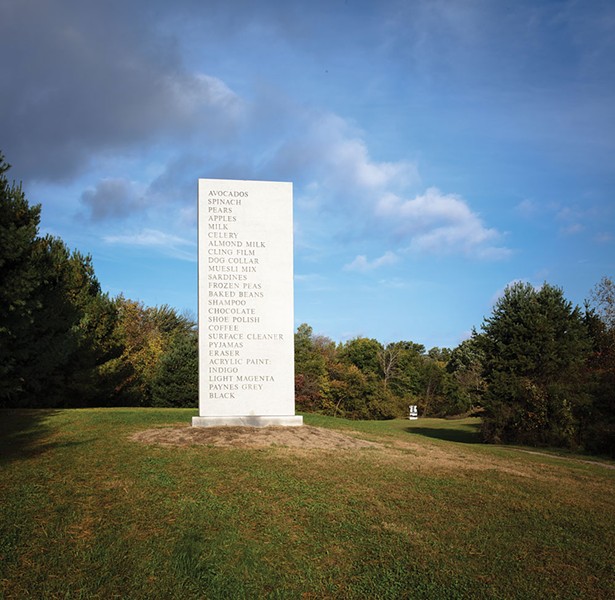 The shopping list is a neglected artform. Humans have been writing them for centuries, yet one has never appeared in an anthology of literature. Critics haven't come to a consensus on a particular masterpiece of this genre. The artist David Shrigley, however, has transformed one grocery list into an eternal granite monument entitled Memorial, which will remain at Art Omi in Ghent for three years.

Technically, a shopping list is a form of poetry. Sometimes a list will be inadvertently humorous. For example:

Memorial has its own intriguing juxtapositions:

Shrigley uses the British spelling of "pajamas" ("pyjamas") and the lovely phrase "cling film" instead of Saran Wrap. "It also includes paints that he bought, so in some ways I think of it as a walk through David Shrigley's village in the UK—you know, shopping at the grocery in the town square, then going to buy some paint, as well," observes Nicole Hayes, curator at Art Omi. "England is a nation of shopkeepers," wrote Adam Smith, and according to Memorial, it still is.

Living in a world of digital screens, where all writing may be easily erased in a moment, modern people feel a nostalgia for pen-on-paper. Compared to a computer screen, an old-fashioned shopping list, written on a notepad, is like... a granite monument!

This is Shrigley's second sculptural shopping list. The first was on view at the southeast corner of Central Park through February, with the same title, though based on lists supplied by several of Shrigley's friends. (At least one was a woman, based on the inclusion of tampons.) The curators at Art Omi saw that work and commissioned a second one. For this sculpture, Shrigley used his own shopping list. Both pieces are the same size, 16.4' by 6.6' by 1.8', though the first has rough-hewn edges and Art Omi's is purely rectangular. The new sculpture weighs 38,000 pounds.

Memorial was fabricated by a stone carving company in Philadelphia which usually makes headstones. It stands in the Fields Sculpture Park at Art Omi, with over 70 other sculptures. When visitors encounter Memorial, they often laugh. One reason is relief. They're expecting names of the dead; instead they find "milk," "apples," "celery," "sardines."

David Shrigley is a 49-year-old British visual artist. He's known for childlike cartoons such as a picture of a man aiming a bow and arrow at the sky, with the caption: "I HATE BALLOONS." In 2007 he released Worried Noodles, a double-CD of his lyrics set to music by 39 artists including David Byrne, Dirty Projectors, and Grizzly Bear.

Perhaps Memorial is a nod to Jenny Holzer, a neo-conceptual artist whose pithy aphorisms such as "Raise boys and girls the same way," have appeared in many forms—LED displays, slide projections on buildings—but also stone carvings. Memorial also echoes Marcel Duchamp's creation of the "readymades," items that Duchamp would buy in a store, take home, sign his name on, and call artworks. If a readymade is art, why isn't the shopping list for a readymade art? Since the list includes paint, Shrigley may be signaling that Memorial is art about art. (Could the stone be memorializing paint-on-canvas, a rather antiquated form of contemporary art?)

Memorial is quite timely. As statues of Robert E. Lee are being pulled down all over the South, many Americans are thinking, "Who needs another dead white men on a dead white horse in our town square?" It's time for a monument that isn't sexist, racist, or imperialist: a shopping list.

The original print version of this article was titled:
"Don't Forget the Cauliflower!"